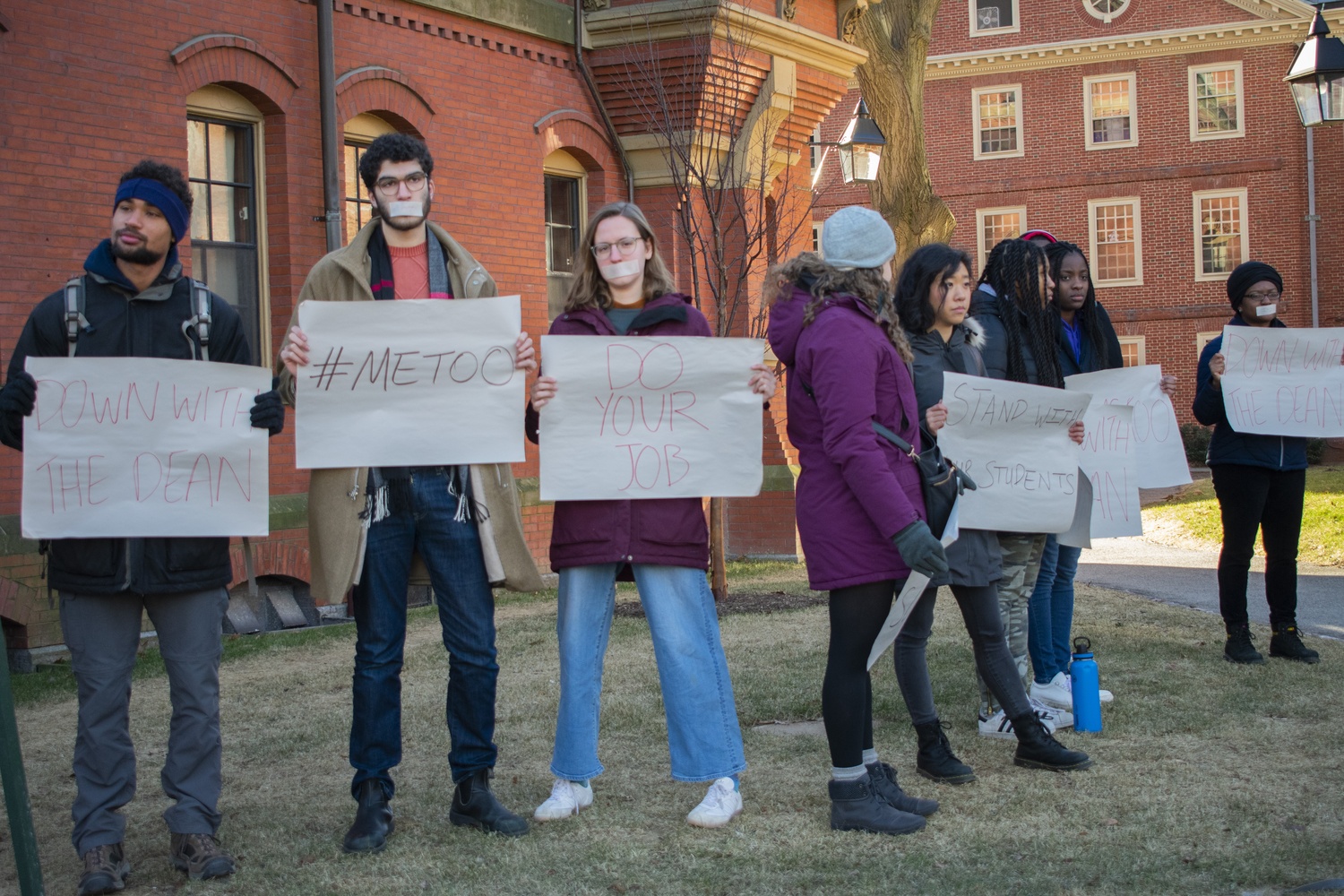 More than 50 students called for College administrators to remove Winthrop Faculty Dean Ronald S. Sullivan, Jr., from his post at a rally in front of Massachusetts Hall Monday afternoon.

Toting signs that read “Do Your Job” and “Remove Sullivan,” attendees laid out a set of demands for Harvard administrators. They called for Sullivan’s removal, a public apology, and a formal inquiry into faculty deans’ responsibilities to students.

Harvard has opened three Title IX investigations into Fryer based on complaints brought by former female employees who say he harassed them while they worked at the Education Innovation Laboratory, the research group he founded. One of the investigations is ongoing.

In an email to Winthrop students about his decision to represent Weinstein, Sullivan wrote that defense lawyers have a duty to represent “unpopular defendants.” He later followed up with another email to Winthrop residents, announcing “processes” that he and Stephanie R. Robinson — his wife and fellow Winthrop Faculty Dean — were implementing after soliciting students feedback following his decision to defend Weinstein. 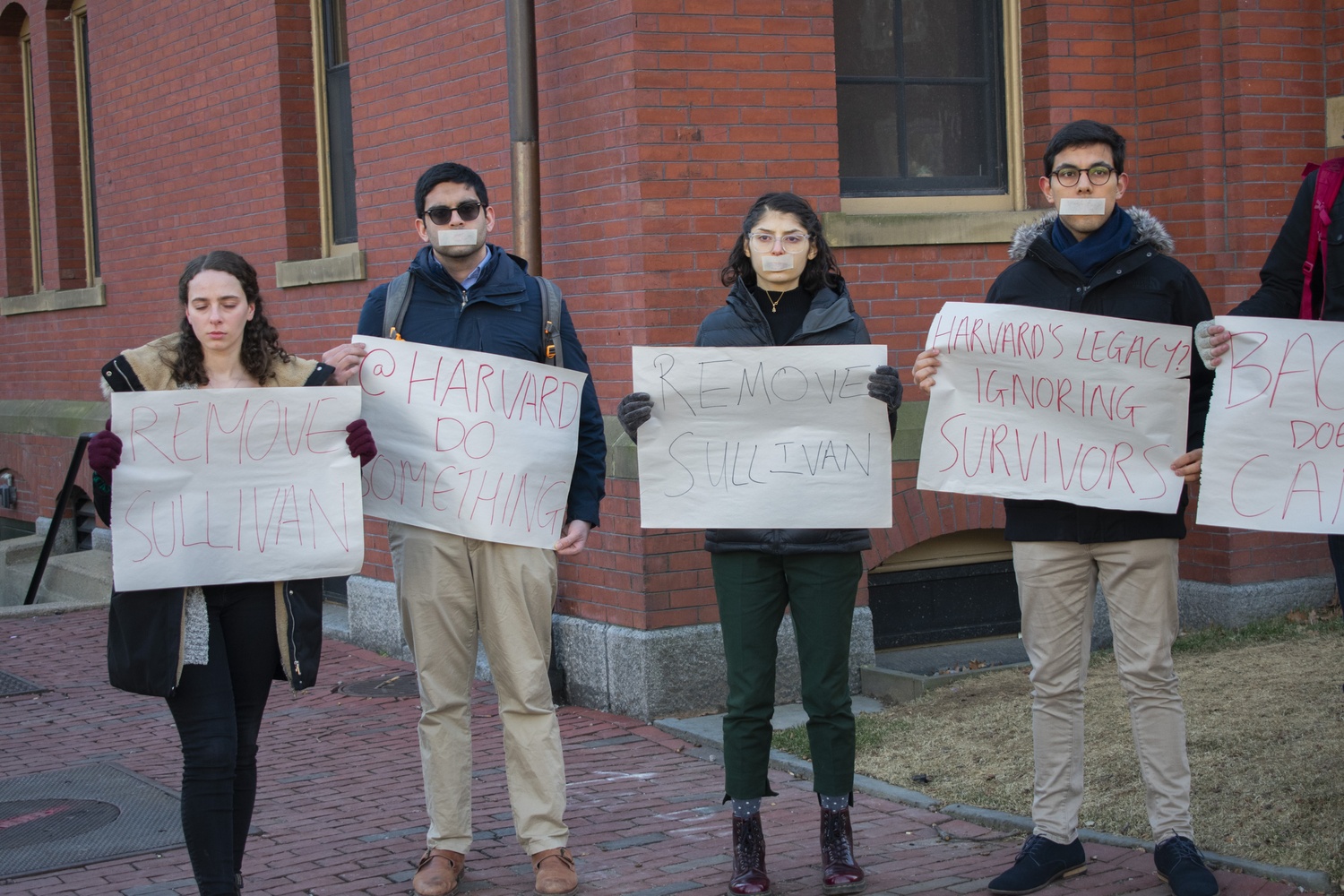 With tape over their mouths in recognition of the #MeToo movement, students demand action from the college following Ron Sullivan's decision to defend Harvey Weinstein. By Shera S. Avi-Yonah

At Monday’s rally, students stood in front of Massachusetts Hall with tape over their mouths.

After several minutes of silence, a series of students spoke. Hilda M. Jordan ’19 said Sullivan’s comments on Weinstein and Fryer conflict with his role as a faculty dean. In particular, she pointed to Sullivan’s allegations that witnesses in Harvard’s investigations into Fryer were coached.

“Your role is not just in filing paperwork or smiling in our faces. Your role is to deal with the culture that you establish as a Faculty Dean. So Dean Sullivan, please reconcile how you can care about sexual assault and at the same time, have claims against a Harvard affiliate being nothing more than coaching?” she said. “You are a faculty dean, not just an attorney.”

Winthrop resident Madeleine D. Woods ’19 also called for Sullivan to step down from his post and for administrators to reshape the faculty dean position.

“Even if he puts out an apology, the fact that he didn’t even think of the impact this would have is probably the most damning element of this,” Woods said. “The only move forward is not only to remove Dean Sullivan, but then to have a structural reconsideration of what it means to be a faculty dean so we don’t have an issue like this again.”

Lowell Faculty Dean Diana L. Eck, who attended the rally, said she agreed with students’ calls for the College to reevaluate the faculty dean position.

“We talk a lot about what the role of a resident dean is, what the roles of our tutors are, but the faculty dean role is really important. It’s not nominal. It means a certain amount of hard decision-making on the part of those of us who assume that role,” Eck said.

“The issue is that he cannot simultaneously hold that role while still having a charade of saying that he can actually protect the integrity of his students,” Mudannayake said in an interview Thursday.

At the event’s start and end, Mudannayake repeated the organizers’ demands and criticized administrators’ lack of public response.

Dean of the College Rakesh Khurana wrote in an email Monday that support for students in residential spaces is “among the highest of the College’s priorities."

“I take seriously the concerns that have been raised from members of the College community regarding the impact of Professor Sullivan’s choice to serve as counsel for Harvey Weinstein on the House community that he is responsible for leading as a faculty dean,” Khurana wrote. “I have also met with Professor Sullivan to discuss his responsibilities to the House and have communicated that the College believes that more work must be done to uphold our commitment to the well-being of our students.”

Mudannayake, who concentrates in Visual and Environmental Studies, said her aspirations to work in the film industry made Sullivan’s decision to represent Weinstein personal.

“I'm a filmmaker, I study film here, and I hope to one day work in the entertainment industry and when the #MeToo thing happened with Harvey Weinstein's case breaking out in the first place, I was deeply shocked and saddened and very afraid,” Mudannayake said.

A previous version of this article misspelled Mudannayake's name.