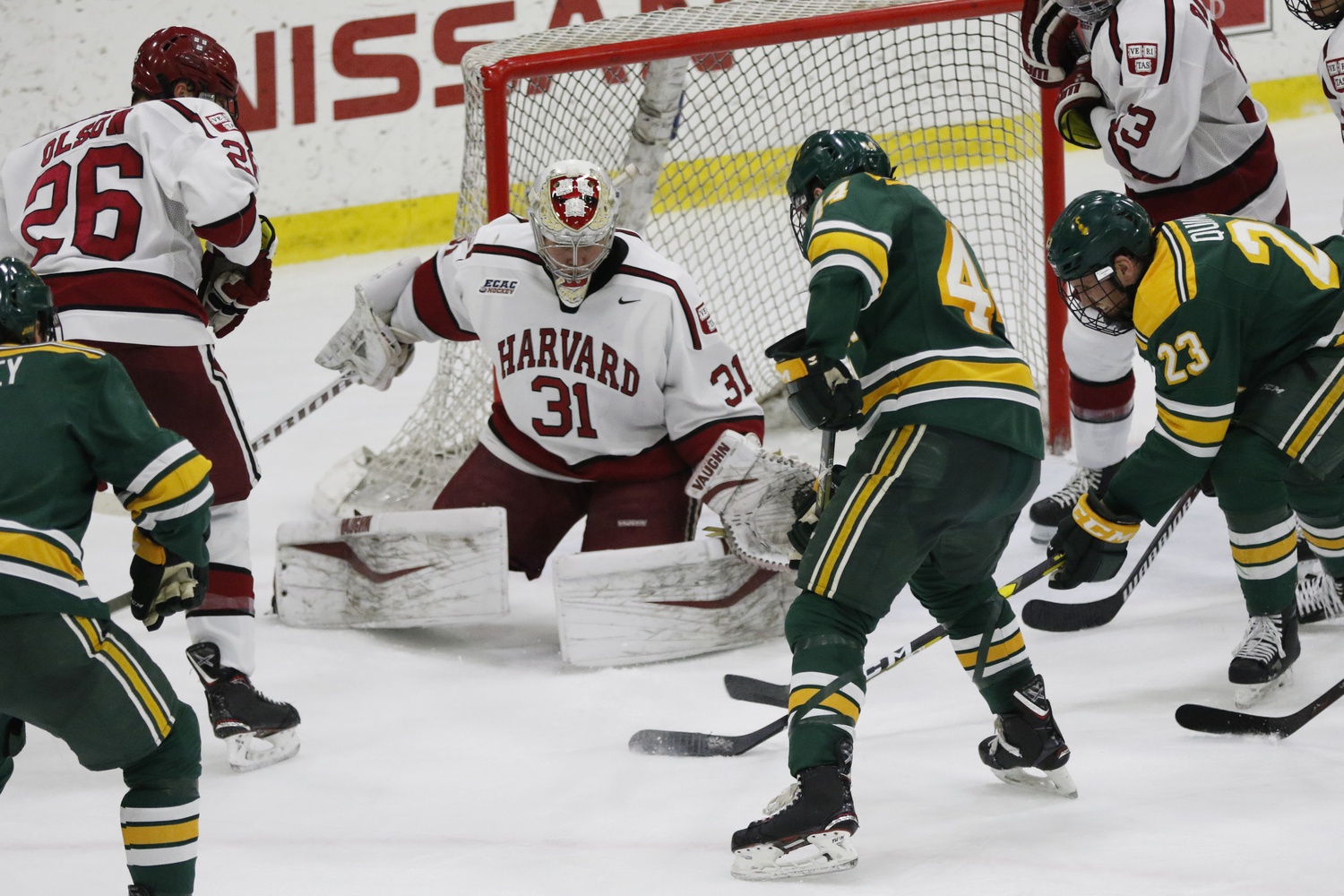 As the regular season winds down, the N0. 18/15 Harvard men’s hockey team still has a lot to play for. This past weekend, the Crimson took a trip to upstate New York looking to lock down four crucial conference points.

While Harvard (14-8-3, 10-6-2 ECAC) completed a season sweep of St. Lawrence (4-24-2, 2-14-2), it stumbled against No. 11/10 Clarkson (20-10, 11-7). Timely scoring helped the Crimson pull ahead of the Saints on Friday, but an early lead proved insufficient to best the Golden Knights on Saturday. The loss puts an end to Harvard’s six-game winning streak in conference play. The Crimson is now three points short of first-place Cornell and tied with Clarkson for third, with two weekends of games left.

“It was a frustrating game,” said Harvard head coach Ted Donato ’91 of Saturday’s defeat. “I thought we did enough good things to give ourselves a chance to win the game. But I feel like we gave up too many careless opportunities against…a good team.”

The Crimson’s clash against the Golden Knights began much the same way as the last meeting between the teams ended. Just 39 seconds into the contest, freshman Jack Drury won an offensive-zone draw back to sophomore defenseman Reilly Walsh at the blue line. Walsh’s seeing-eye shot beat Clarkson junior net-minder Jake Kielly to put Harvard up, 1-0. 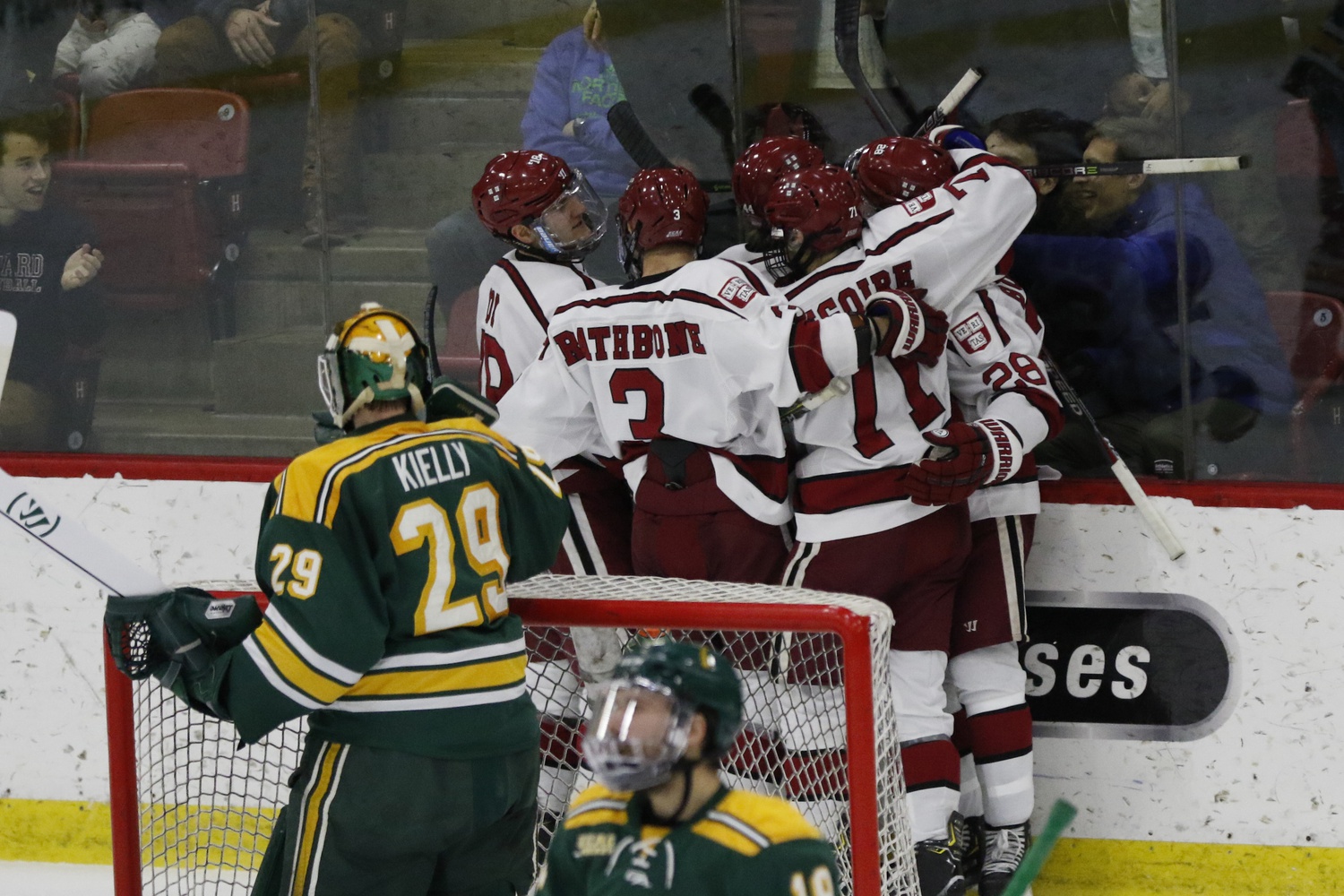 The Golden Knights have proven their effectiveness even when facing a deficit against the Crimson, so Harvard can never celebrate too soon. By Timothy R. O'Meara

But these squads tend to rack up the goals at Cheel Arena, and this game proved no exception. Though the first period ended with a 2-1 Crimson lead courtesy of junior Frédéric Grégoire, the Golden Knights came back roaring in the second, scoring two quick goals to pull ahead. Harvard co-captain Michael Floodstrand evened it at 3-3 shortly thereafter, but the team’s real misfortune came then.

Senior goaltender Michael Lackey was shaken up after a collision at the net front and the coaching staff elected to swap him for junior backstop Cameron Gornet. Lackey (2.23 GAA, .920 SV%) has started all but one game for the Crimson this season, and a late-season run for the team will certainly count on his performance.

To make matters worse for Harvard, Clarkson junior forward Haralds Egle notched the go-ahead tally for the hosts not long after the goalie change. Despite outshooting the Golden Knights 11-6 in the final frame — and 33-26 in the game overall — Harvard could not catch up again. An empty-netter sealed the result, ending the season series against Clarkson in a split.

The Crimson’s inability to pull ahead was not for lack of trying. The team had six power play opportunities but could not find the net on any of them, and has not scored now on 15 straight chances. Instead, Harvard has found recent success on the penalty kill — a sore spot in the squad’s statistics — although its streak of perfect kills ended on Saturday. For a group that has had much success on the offensive end of special teams and owns the best power play efficiency in the country (31.8%), the dry spell is a concern, but also an opportunity to retool.

“The power play’s been great for us all year, and we know that there will be adjustments that need to be made every weekend. We had some looks, just didn’t find the back of the net. We had some good opportunities, we had some good puck movement. But we could’ve certainly used a power play goal tonight.” 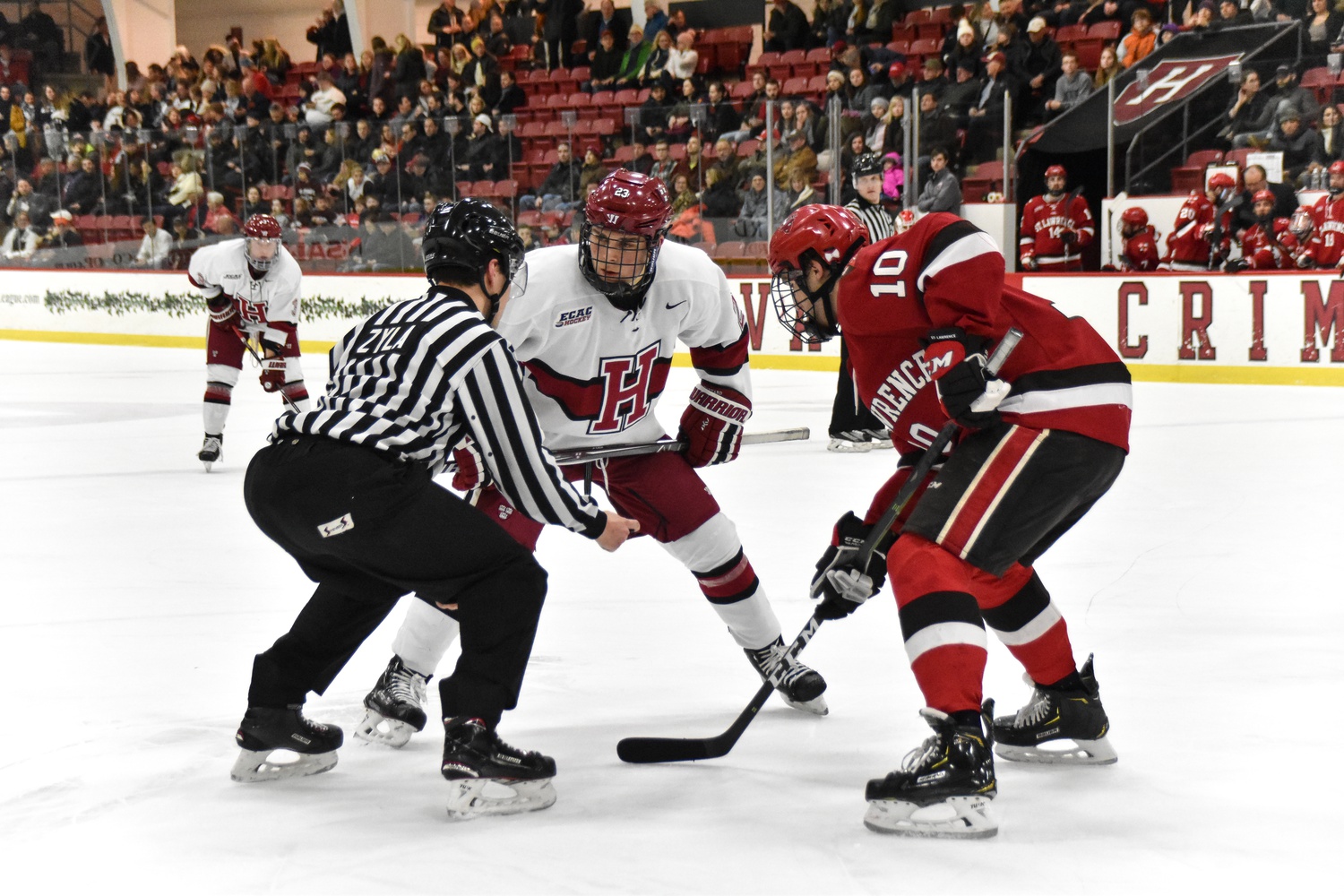 The last time the Crimson faced off against St. Lawrence, the Saints were staring down a 6-0 hole 30 minutes into the game. Harvard net-minder Michael Lackey, who returned to the bench at the halfway mark, posted a perfect save percentage for the night. By Quinn G. Perini

The previous day, St. Lawrence offered far more resistance to the Crimson than it did in a 7-3 shellacking in late January. The Saints sit at the very bottom of the ECAC points table this season, but that didn’t stop the team from jumping out the gate.

Harvard has struggled to start on time, especially early on this season, and the visitors were staring at a deficit after St. Lawrence rookie forward David Jankowski bested Lackey just six minutes into the game. Junior Ryan Garvey extended that margin not long after.

“I give them a lot of credit,” coach Donato said. “They gave us everything we could handle, and I thought we battled hard, but they played well. You can see, now that they have a few more healthy bodies, that that’s going to be a very dangerous team in the playoffs.”

The Crimson came back to life after the 2-0 tally. A solid shift in the offensive zone for the top line had Drury circling the net; he centered for his linemates in the slot, and the puck bounced from sophomore forward Henry Bowlby to the waiting stick of rookie Casey Dornbach, who stuffed it short-side.

Dornbach’s goal put him in sole possession of second place in team scoring (6–19—25), a spot he now shares with Walsh. The new-look line comes after former top-line rookie Wyllum Deveaux sat out the Beanpot consolation game after a collision against Union the weekend before.

Harvard threw everything and the kitchen sink at SLU in the middle frame, outshooting the hosts 18-4. Rookie net-minder Emil Zetterquist proved up to the task, however. The squads returned to the ice for the final 20 with the score still at 2-1 in the Saints’ favor.

“I think [SLU] battled physically,” coach Donato said. “Our guys, I think, stayed with it. The puck wasn’t finding the back of the net, [but] we had plenty of chances, hit a few posts, took the game back in the second period.”

Seven minutes into the third, the Crimson continued to pressure, having just killed a penalty and had a shorthanded chance that hit the pipe to boot. Zetterquist fended off a shot from freshman defenseman Jack Rathbone at the point, but the rebound made its way to rookie forward Baker Shore in the slot. The puck was scooped out of the ensuing scrum by co-captain Lewis Zerter-Gossage, who fired it far-side from the left circle. Zerter-Gossage’s team-leading 14th goal knotted the game up at 2. 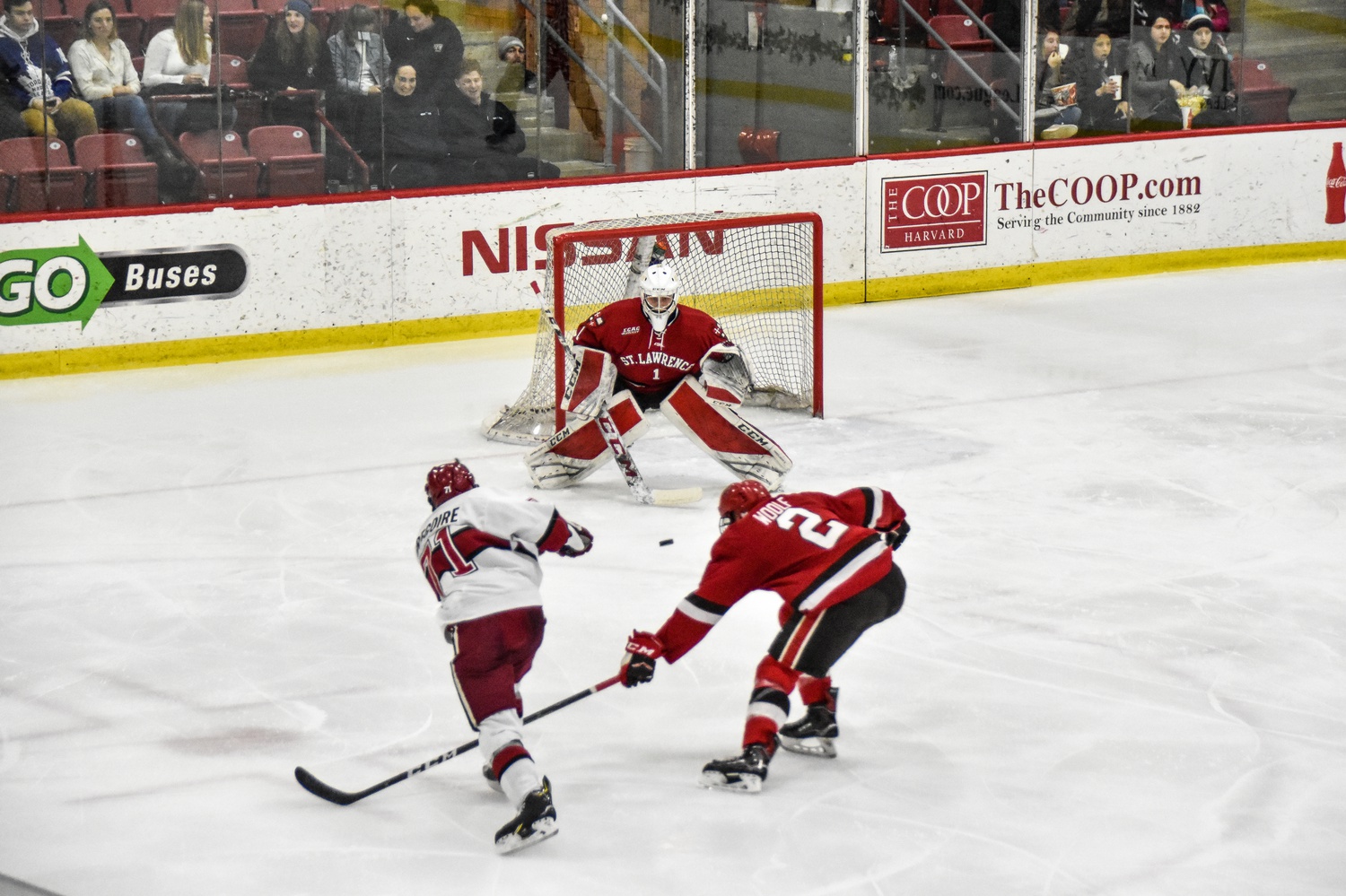 Saints rookie goalie Emil Zetterquist has probably seen more of the Crimson than he'd like this season. In nearly two hours of play, Zetterquist has faced down 69 Harvard shots and conceded 7 goals. By Quinn G. Perini

As time ticked down and Harvard continued to hold an edge in shots but could not beat Zetterquist, the contest seemed destined for overtime. Until, with 1:22 left on the clock, junior defenseman Adam Fox called for the puck at the top of the left circle and fired the puck towards the net. The screened Zetterquist could not stop the shot from finding the back of the cage after deflecting off Crimson sophomore forward Jack Badini. St. Lawrence pulled its goalie for the 6-on-5 advantage not long after but the 3-2 score held.

“We had a good little cycle going there, and we knew there was only a minute or two left in the game,” said Badini, recounting his game-winning goal. “...I was just trying to go to the net. I didn’t even see [Fox] shoot it, I guess it went off my leg. I’ll take it.”