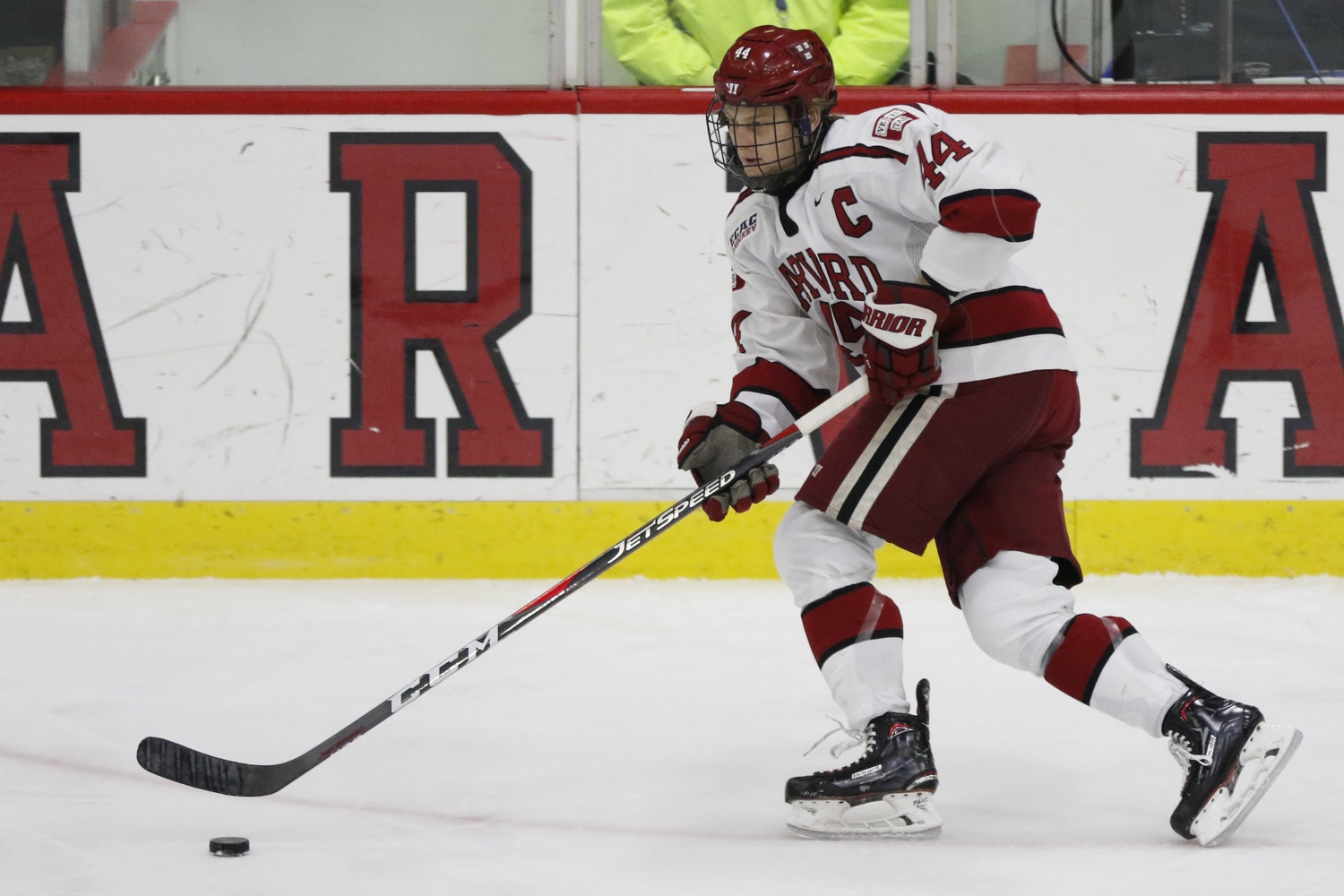 On Saturday night, the Harvard men’s hockey team saw its chance to nab a four-point weekend and hit the ice running. It took the Crimson just 1:34 to find twine against St. Lawrence, and the hosts scored two more goals in the next three minutes. And that was only the beginning of an offensive effort that powered Harvard to its first weekend sweep.

Seven different goal-scorers aided in the Crimson’s (10-6-3, 7-5-2 ECAC) resounding defeat of the Saints (3-20-1, 1-10-1), by a score of 7-3. The contest saw all three of Harvard’s goalies split time in net; at the other end of the ice, senior net-minder Arthur Brey was yanked after conceding three goals on four shots. All this came in co-captain Michael Floodstrand’s 100th appearance for the Crimson, and the senior forward also nabbed a tally for his efforts. The win comes with a valuable two points as the ECAC race grows ever tighter.

“Anytime you can win a game this time of year, you’re happy about it,” head coach Ted Donato said. “...We had a great week of practice and we’ve had a great weekend. Hopefully we can follow it up and keep going.”

St. Lawrence, already in last place in the ECAC before Saturday’s game, was further hobbled by the loss of a few players to injury. Harvard shot out of the gate to start the contest and didn’t let up its pressure, resulting in a first period in which the hosts outshot the visitors 14-3 despite being up by three goals. The first tally was courtesy of rookie forward Casey Dornbach, who fired low inside the blue line to beat Brey. Dornbach’s tally is just his fourth goal of the year, but he leads all freshmen in per-game points (1.16) and assists (0.95).

His classmate, defenseman Jack Rathbone, followed soon after, skating around a Saint and taking advantage of the partially screened goaltender. A minute later sophomore Jack Badini won a battle at the corner and tucked the puck to junior Nathan Krusko, who roofed it over Brey’s shoulder. That put an end to the net-minder’s night. Brey was replaced by rookie Emil Zetterquist (4.57 GAA, .879 SV%).

“It was pleasant surprise,” said Dornbach when asked about the team’s solid start. “We just came out and tried to play our game, play hard and get some pressure on early, and we were lucky to get a couple bounces.” 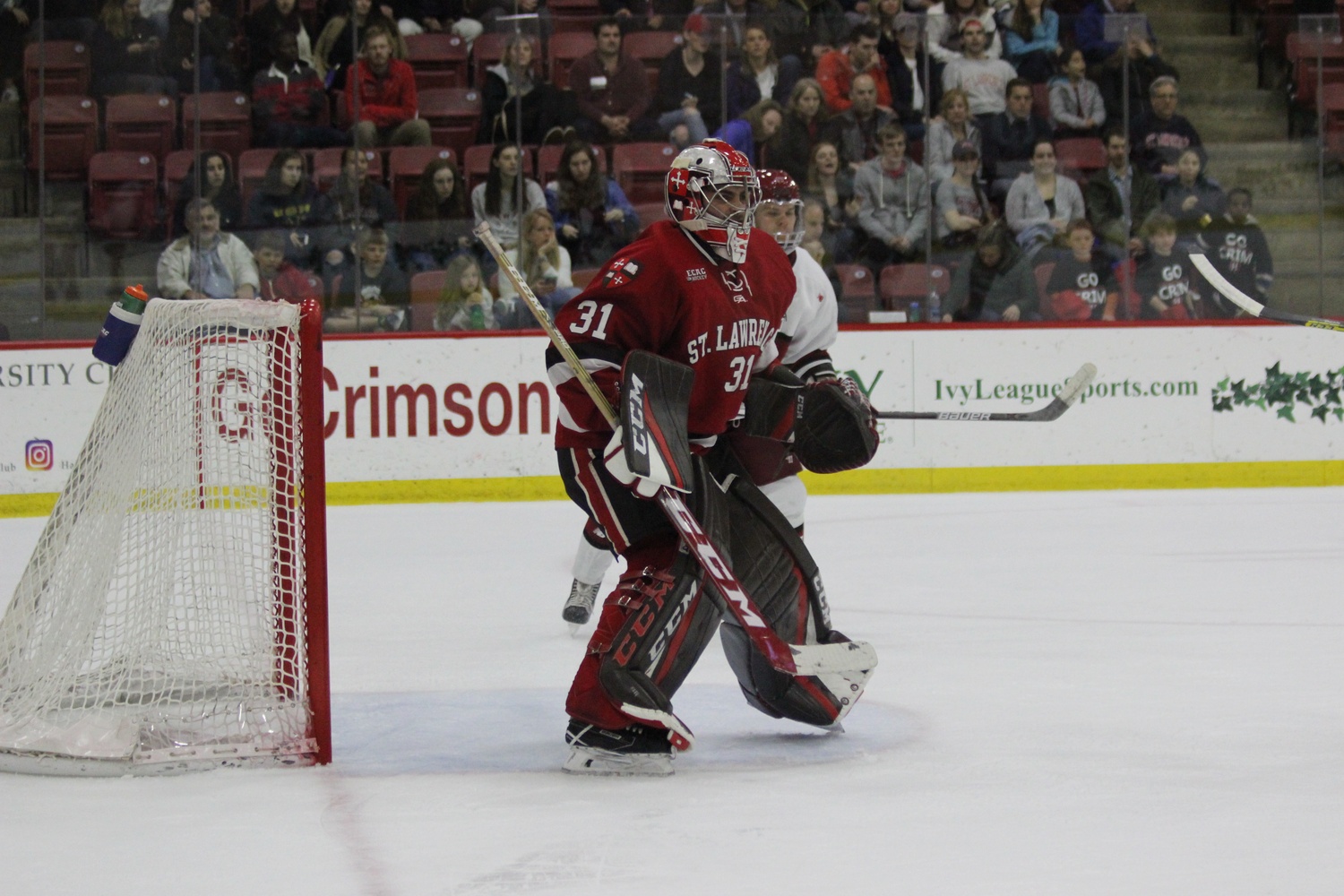 The quick pace — especially on the rush — continued for the Crimson to start the second period, and it wasn’t long before Harvard capitalized on its chances again. Frédéric Grégoire sped up the left wing, shooting into Zetterquist’s pads. The net-minder stopped his attempt, but the rebound found Floodstrand for the tap-in. Just 23 seconds later, junior blue-liner John Marino picked the top corner on a feed from co-captain Lewis Zerter-Gossage, bringing Harvard’s lead to 5-0.

The Crimson had been unsuccessful on its power play chance at the end of the first period, but with the momentum firmly in hand, the team was given another try as St. Lawrence rookie Andrew McIntyre was whistled for kneeing. It took only 13 seconds for the nation’s best man-advantage squad (35.9%) to find the back of the net. Junior Adam Fox teed up the shot for fellow defenseman Reilly Walsh, who then fired the puck from the right circle. Walsh’s goal is his second of the weekend after a scoreless spell. For his part, Fox’s two assists put him back atop the country’s blue-liners in points per game (1.42) and assists per game (1.05).

With the safety of the six-goal margin, senior goaltender Michael Lackey was given a rest in favor of junior Cam Gornet. Lackey finished the night with a spotless record, having turned away all nine shots he faced. Gornet would end up playing 26:29, with the remaining few minutes given to rookie Derek Schaedig. 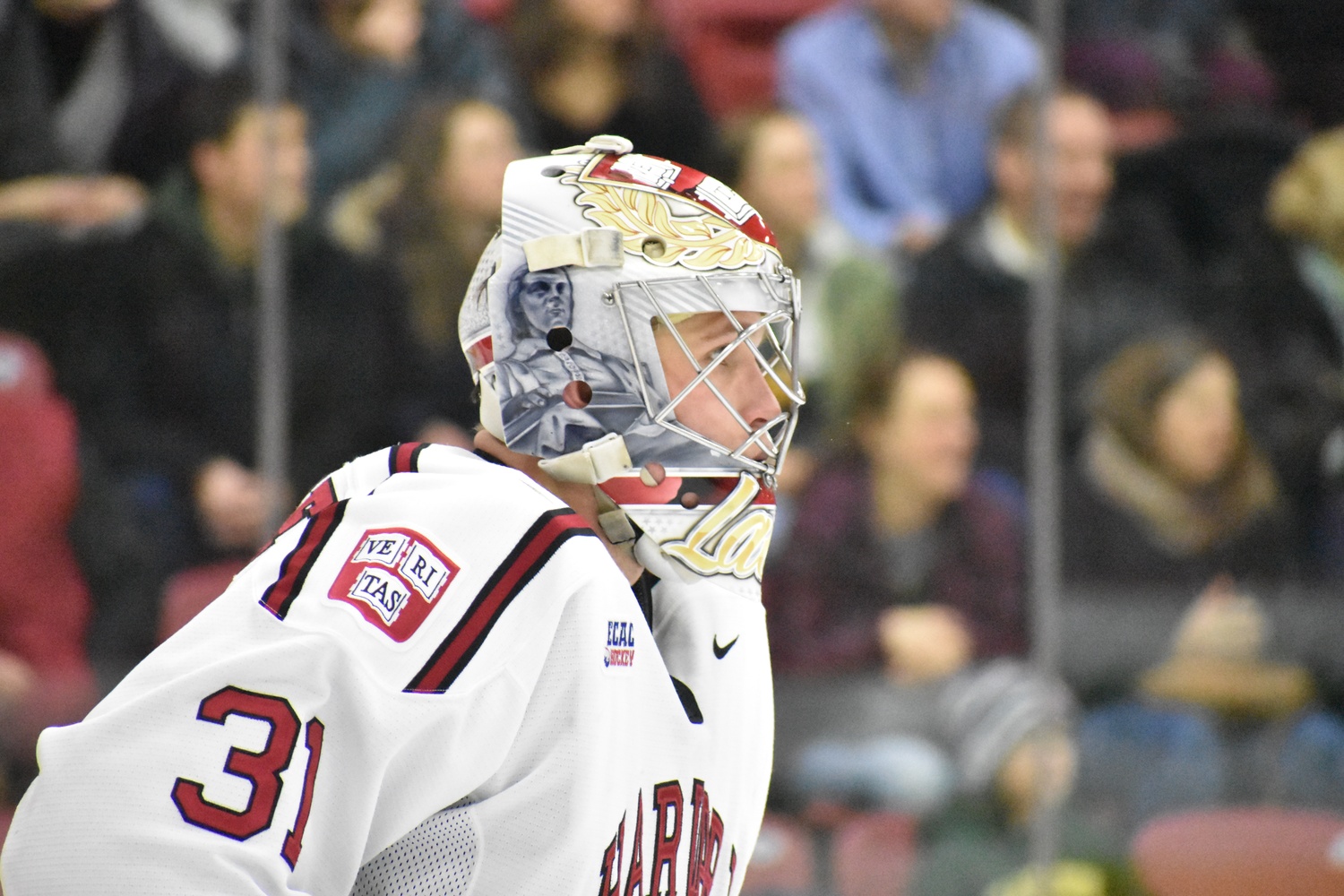 Senior net-minder Michael Lackey has put up solid stats in 2019 after struggles at the beginning of the season. By Amanda M. DiMartini

“Michael Lackey has continued to get better and better for us throughout the year, and has given our team a lot of confidence,” coach Donato said. “It was a chance to give him a break; we have important games coming up…. Nice chance to get some other guys some time.”

If Harvard had hoped to escape the game unscathed, that was not to be. Early in the third period, rookie Wyllum Deveaux took a trip to the penalty box on a five-minute boarding major. The Saints scored not once but twice on the ensuing power play courtesy of rookie linemates Zach Risteau and Kaden Pickering. Deveaux got one back at the very end of the third period on another power play; a last-minute St. Lawrence tally from sophomore Eddie Pavlini was too little, too late.

The victory rounds up the Crimson’s first weekend sweep of the season. The four points could not have come at a better time — Saturday’s win boosts the team to second place in the ECAC, tied with No. 10/9 Clarkson. Only one point separates Harvard from the teams tied for first place. The Crimson has played more games than the other top three squads, but that difference will be made up when Harvard shifts its focus to the Beanpot in February and skates in fewer conference matchups.

All in all, the team can look back at this weekend as a success: solid performances in net, 40 percent efficiency on the power play, and goals from multiple contributors. Of course, carrying that forward will be essential for the Crimson’s second-half run.

“We knew coming into the year that we were going to be a second half team,” Floodstrand said. “We have so much young talent, especially those guys up front, a couple guys on the back end as well…. We’ve just got to keep rolling in practice.”