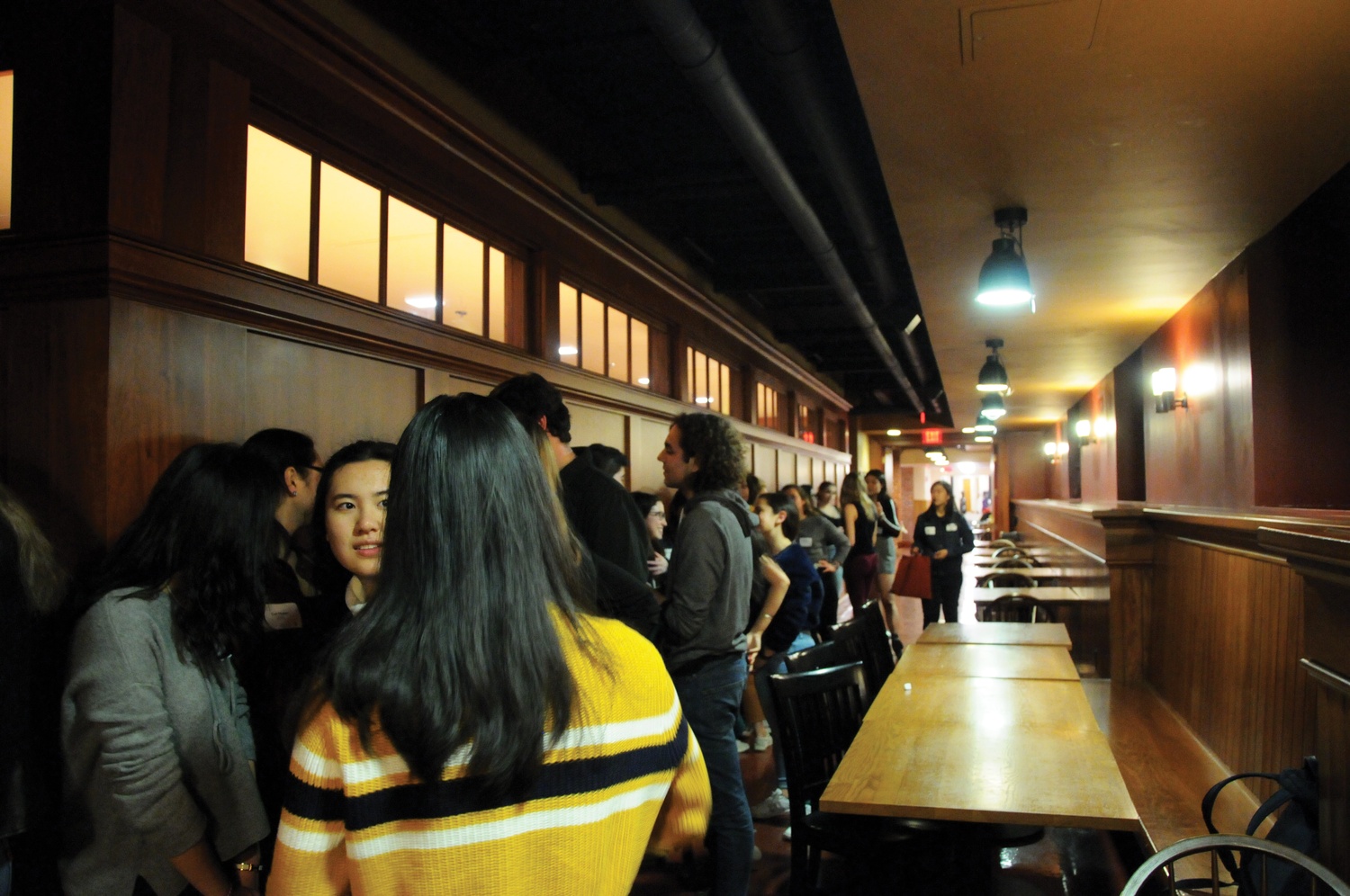 The number of students who expressed interest in the social clubs — all former sororities that went gender-neutral in the past year to avoid Harvard’s social group sanctions — marks an approximately fourfold increase from historically low turnout for sorority recruitment in spring 2018. Online registration for the joint recruitment closed Friday.

As part of the first round of recruitment activities, prospective members met social group affiliates and leaders, traveling among four parties, each hosted by a different group. The Fleur took over the Cambridge Queen’s Head Pub, while the Ivy, the KP, and the TA hosted their events at the Student Organization Center at Hilles.

Event attendees, a majority of whom were female, said they are interested in joining the groups — now designated as Recognized Social Organizations by the College — because they are excited for the community that comes with being in the clubs.

Rachel L. Reynolds ’22, who was walking from the Quad to the Fleur meet-and-greet with friends, said she was excited to get to know some of the people she had met during the recruitment night.

“Already in my first session I actually met someone who lives an hour away from my house, which is an amazing thing to see,” she said. “I’m from the South, so I don’t meet a lot of people who are from right by my area.”

Many students who attended the recruitment activities said they decided to come partly because of the support the College has extended to RSOs.

“It’s just really cool to be a part of this legitimate process that’s approved by the school, and the potential to be in school-approved groups,” Ella Eisenberg ’22 said. “Recruitment itself is very accessible, and it was on the Yard bulletin, and all of that. The school clearly is supporting this.”

“I think that although I probably would have preferred to be in [a single-gender sorority], I’m scared,” she said. “I don’t want to be affected by sanctions.”

Touting their exemption from the College’s penalties, the four former sororities announced in January that they would partner to sponsor a joint recruitment process for new members during the spring semester. According to the groups’ organizing committee, the recruitment will “provide potential members the opportunity to meet” all the organizations and “hopefully find the group that is a best fit.”

Recruitment activities for the four RSOs began Monday night and consist of four rounds held over eight days. Events include a variety of socials, group outings like ice skating, and one-on-one conversations with current members.

But even as four former single-gender social organizations are working with the College to hold joint gender-neutral recruitment, some final clubs and Greek groups continue to fight the sanctions.

National groups affiliated with the four former sororities sued the University in December 2018, alleging the College’s sanctions are coercive, discriminatory, and unconstitutional. National organizations for Kappa Kappa Gamma, Kappa Alpha Theta, and Alpha Phi, and a Delta Gamma management corporation are among the plaintiffs in a pair of cases brought in federal and Massachusetts state court.

Ahead of those lawsuits, Harvard’s chapter of Alpha Phi — which disaffiliated from its national organization and went gender-neutral as the Ivy in August 2018 — reopened as a single-gender group in November 2018, while the Ivy continued as a gender-neutral organization. Eleven former Alpha Phi members have either rejoined the all-female sorority or “expressed interest in rejoining,” according to the complaint filed in state court.

The University must file formal responses to the parallel lawsuits by Feb. 8.