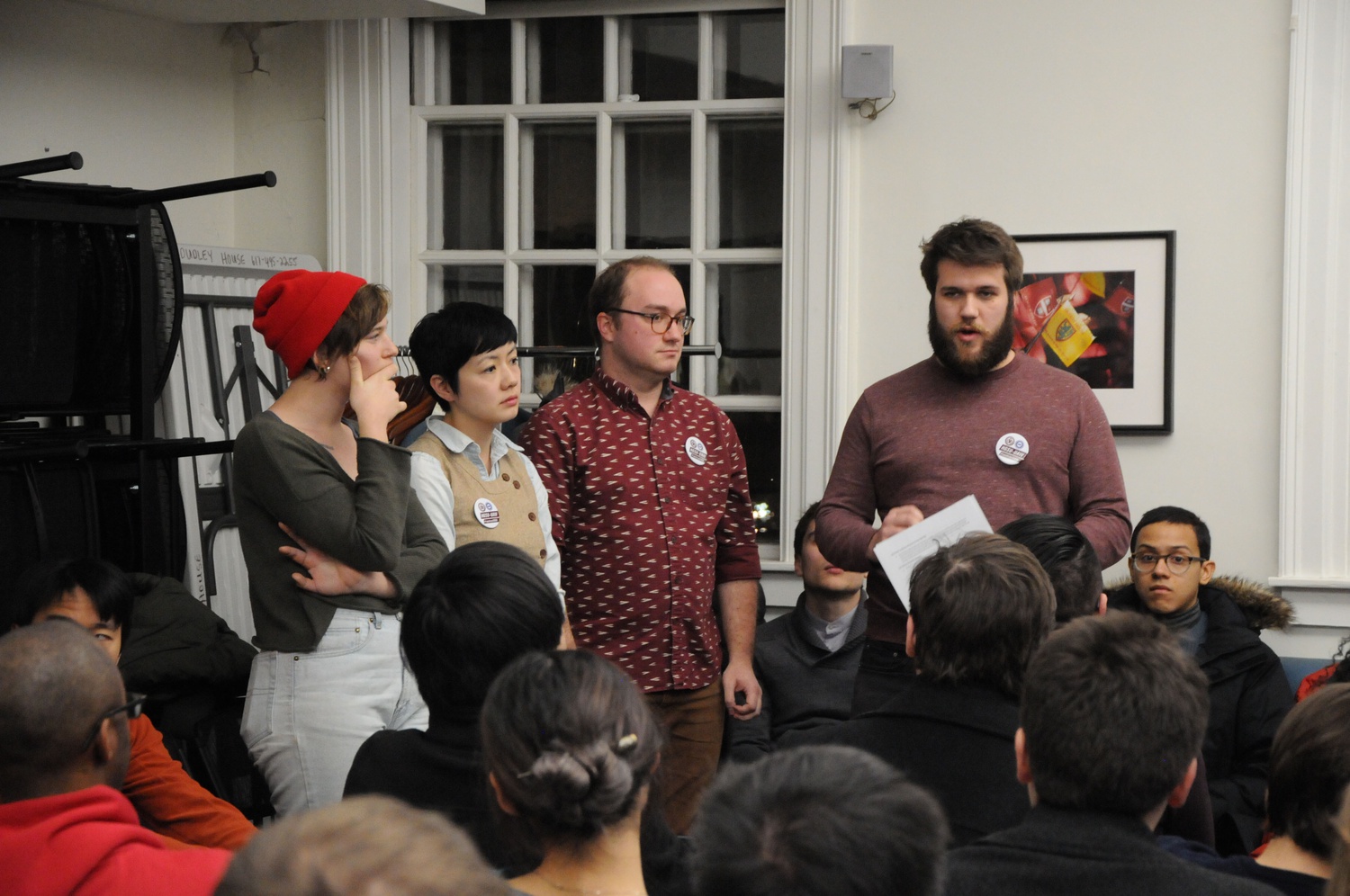 Erik Baker — a representative of the Graduate Students Union — present a motion to the Graduate Student Council on Wednesday evening, requesting support for their #NoCarveOut bargaining effort over the University's procedures for handling graduate student accusations of discrimination and sexual harassment. By Camille G. Caldera
By Luke A. Williams, Crimson Staff Writer

The Graduate School of Arts and Sciences’ Graduate Student Council approved a resolution declaring their official support for the graduate student union’s proposal to include sexual harassment and discrimination in grievance procedures at their monthly open meeting Wednesday.

Prior to passing the resolution, representatives from the Harvard Graduate Students Union-United Automobile Workers explained their proposed policies —which they call the #NoCarveOut proposal — and fielded questions from attendees. Graduate students at the council meeting also debated the Office of Diversity and Minority Affairs’ rules for funding student groups, which some called unfair.

The GSC decided to expedite the vote on their resolution of support — originally scheduled for April — and then voted unanimously, with one abstention, to support the union’s grievance procedure proposal, which if included in their contract would provide the option to choose neutral third party arbitration in cases of sexual harassment and discrimination. Currently, the University oversees such cases, whereas third party arbitration takes judgement out of the University’s hands.

Union members made the case for their proposal, arguing that third party arbitration is necessary to eliminate any conflict of interest that might arise when the University has to investigate its own faculty or staff, or seeks to protect its image.

“Instead of having to go to an office that is ultimately run by Harvard and in some sense is biased towards protecting Harvard’s interests, you go to an outside arbitrator — who is paid in equal parts by the union, who represents you there, and the University, so there’s no conflict of interest,” said bargaining committee member Cole M. Meisenhelder.

The proposed policies would not preclude students from choosing to use existing University procedures; third-party arbitration would serve as an additional option, according to union organizer Erik Baker. He added that while the grievance policy would initially raise dues by a voted-on amount, increased use of the arbitration process would not further raise the dues rate.

Meisenhelder said that the Harvard bargaining unit continues to oppose including sexual harassment or discrimination cases in the neutral third-party grievance procedure clause.

“This grievance procedure is going to be in the contract no matter what,” Baker said. “The University says that that’s fine as a way to treat every other contract violation, but in the specific case of sexual harassment and discrimination you have to only use the institutions that exist at the present.”

University spokesperson Johnathan L. Swain wrote in an emailed statement that if included in the contract, the union’s proposal would lack the “thoroughness, fair play, and due process” of Harvard’s investigatory process. He added that a third-party arbitrator would not have any legal power to punish faculty, students, or other employees who are found guilty of misconduct.

“The University continues to approach these negotiations in good faith, with a commitment to reaching an agreement that is good for student workers, all students and the University. While differences around this and other proposal remain, we are committed to the negotiation process and look forward to continuing to sort through these important issues with our HGSU-UAW colleagues,” Swain wrote.

The GSC also updated attendees on their most recent meeting with GSAS deans, during which they discussed problems students had voiced with the GSAS Office of Diversity and Minority Affairs’ funding process, after some students took issue with ODMA’s decision against funding the GSAS LatinX Student Association.

The ODMA currently provides additional funding to three student groups that serve as “umbrella” groups, according to GSAS spokesperson Ann Hall. The three funded groups are LGBTQ@GSAS, Harvard Graduate Women in Science and Engineering, and the W.E.B Du Bois Graduate Society — a social affinity group for all underrepresented students at GSAS. The money these groups receive can be upwards of $10,000.

“This is really about supporting Latinx students who are undersupported,” Benavidez said. “It’s absurd that we ask ODMA for $11,000… pennies at Harvard, dust on pennies.”

“It’s absurd that we have to spill so much email ink just sort of saying, ‘Can you just give us $11,000 so we don’t have to go through reimbursement processes?’ One former leader has a child, and she told me she needed reimbursement to buy her kid diapers. Some of us are not very wealthy. We’re graduate students,” he added.

The GSC also revealed that during its meeting with GSAS administrators, GSAS Dean Emma Dench announced the launch of the Dean Portal program — an online tool where graduate students can directly message any GSAS dean — to increase accessibility between GSAS students and administrators.