Heat Week Kicks Off With Demands From Students, Faculty, and Alumni 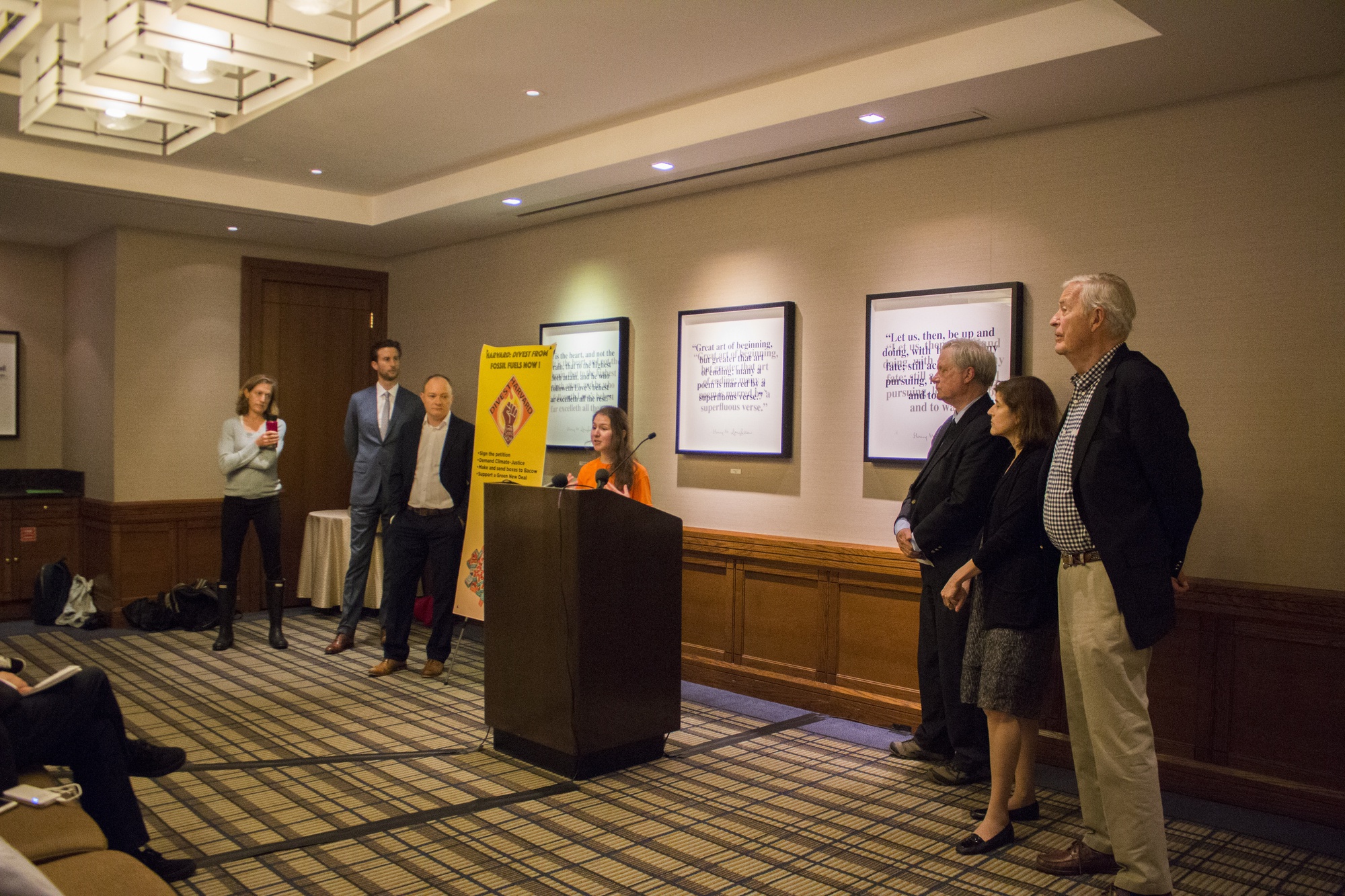 A series of speakers took the mic at the Divest Harvard press conference kicking off Heat Week Monday. Divest Harvard member Ilana Cohen '22, was joined by speakers including Harvard professors, a former U.S. Senator, and a descendent of John D. Rockefeller.
By Alexandra A. Chaidez, Crimson Staff Writer 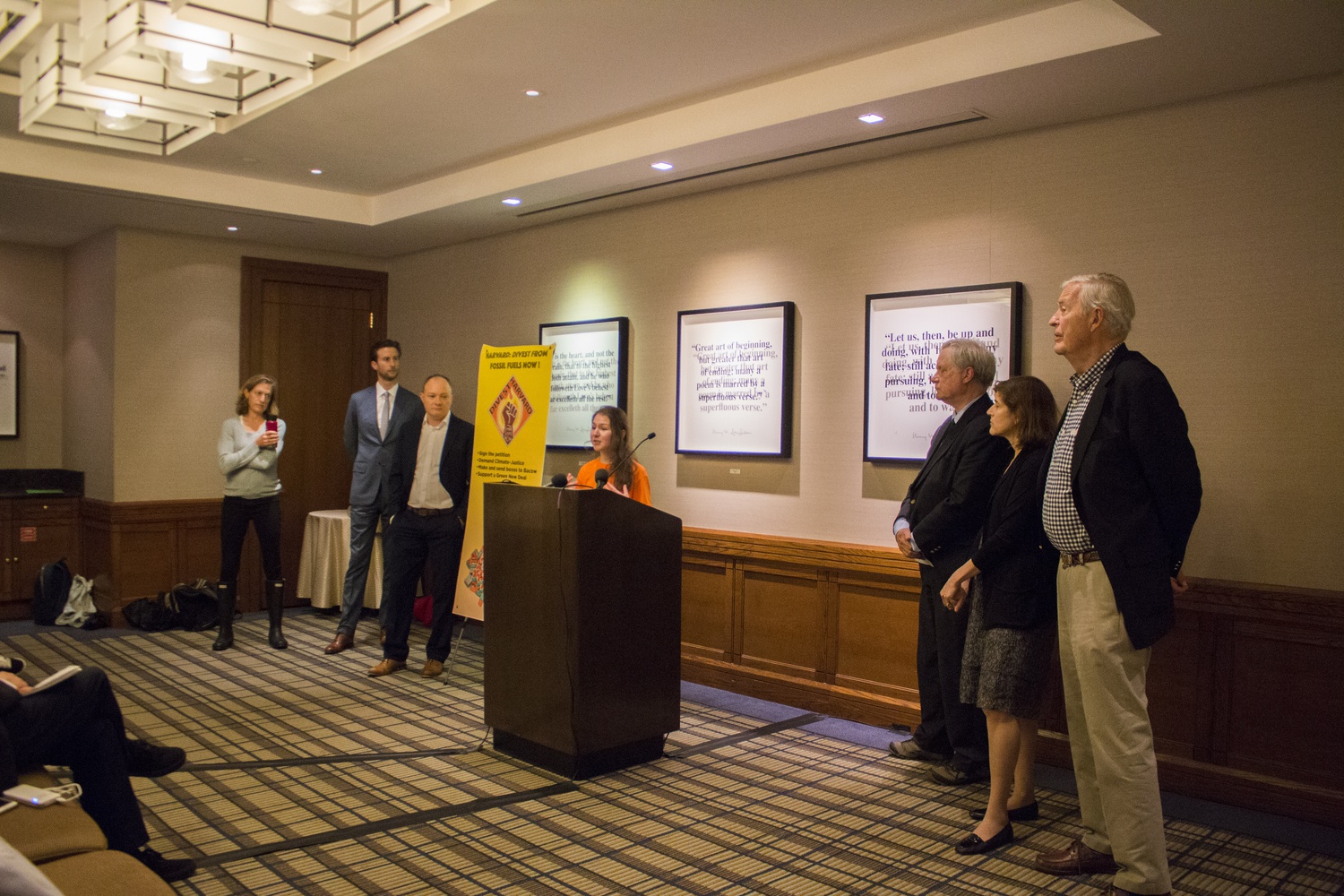 A series of speakers took the mic at the Divest Harvard press conference kicking off Heat Week Monday. Divest Harvard member Ilana Cohen '22, was joined by speakers including Harvard professors, a former U.S. Senator, and a descendent of John D. Rockefeller. By Sung Kwang Oh

At the start of a revitalized “Heat Week” campaign, students, faculty, and alumni gathered to call on University President Lawrence S. Bacow and Harvard administrators to divest their endowment holdings in the fossil fuel industry at a press conference at the Charles Hotel Monday.

This year, members of Divest Harvard planned a week of public actions, civil disobedience trainings, and panels about divestment activism. Heat Week will culminate in a rally entitled “Flood Harvard” in Harvard Yard on Friday.

The group organized the press conference to coincide with Earth Day, and invited high-profile alumni, faculty, and environmental advocates to join their call for fossil fuel divestment.

“It is time for Harvard and other Ivy League schools to divest,” McCarthy said. “They know better. Get over it. Move forward.”

“It’s time for Harvard Corporation’s investment policies to match the University’s commitment to science, to its scientists, to our shared values, our views of the students, the faculty, the alumni to put Harvard's money where it belongs — in the future and not in the past, in clean energy and not fossil fuels,” McCarthy said.

Amidst heightening divestment activism in recent months, Bacow has maintained that the University should engage with fossil fuel companies through its shareholding and scholarship to reduce the effects of climate change instead of divesting from them. Bacow also continues to promote long-standing University president rhetoric that the endowment should not be used as a mechanism for social change.

"The University’s position, as it has stated previously, is that it should not use the endowment to achieve political ends, or particular policy ends,” Swain wrote.

“As President Larry Bacow has said, the University agrees with the urgent need to tackle climate change and has valued the opportunity to discuss the issues with members of the community,” Swain wrote.

Bacow’s messages come as Divest Harvard and the Harvard Prison Divestment Campaign have ramped up their protests and petitions for divestment from fossil fuels and companies tied to the prison industry.

Earlier this month, protestors from both groups interrupted an event at the John F. Kennedy Jr. Forum where Bacow was slated to speak, forcing the talk to continue after moving to a nearby classroom. Bacow also participated in an hour-long forum about fossil fuel divestment.

“An endowment may serve the present, but its deeper purpose has always been to underwrite future generations,” Engell said. “It's been more than five years since Harvard has announced it would not divest. We’ve only a couple more sets of five years and then the game becomes pretty dire.”

“They've got to really be given the room to move away from it, and it's going to take time, but they will change,” he added. “We're not going away.”