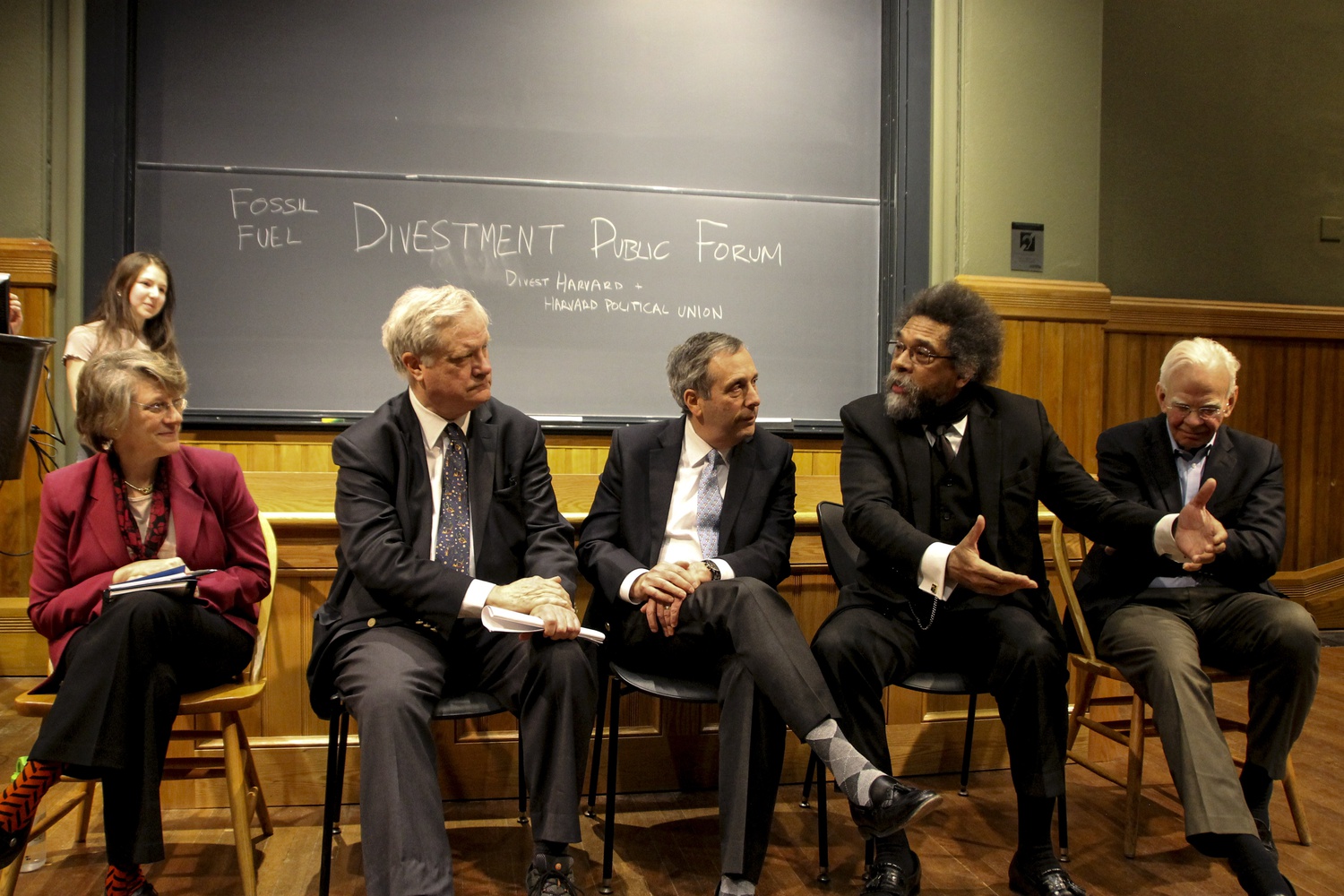 In a surprise appearance, University President Lawrence S. Bacow participated in an hour-long forum about fossil fuel divestment Thursday, an event he previously said he would not attend.

On April 4, Bacow declined Divest Harvard’s invitation to attend the student-led forum through an email from his chief of staff. Just two days earlier, Bacow agreed to attend a private discussion with faculty members concerned about Harvard’s continued investment in companies tied to the fossil fuel industry.

The same day Bacow declined to attend the student-led forum, roughly 30 protestors from the Divest Harvard and the Harvard Prison Divestment Campaign interrupted a John F. Kennedy Jr. Forum event where he was speaking, forcing the talk to move to a classroom.

At the end of the event, Bacow said he was not encouraged to meet with the protestors again, but he ultimately made an appearance Thursday.

A portion of the forum was dedicated to discussion among the faculty members and Bacow about the possibility of divesting from fossil fuels.

Engell, who said he supports divesting Harvard’s holdings in the fossil fuel industry, noted that the issue of fossil fuel investments has a “stop watch.”

“This is not merely a matter of social change,” Engell said. “This is a matter of planetary fate in the long term.”

Bacow spoke about his past work in environmental economics and policy, and advocated for other means beyond divestment for resolving climate change and fossil fuel reliance.

Bacow also explained how previous instances of divestment — such as the University’s divestment from the tobacco industry in 1990 — differ from fossil fuels. He said that tobacco divestment included a complete ban on interacting with tobacco across all spheres of the University, including barring it from campus and prohibiting research funded by tobacco companies in Harvard labs. He said this sort of full-scale divestment is not possible for fossil fuels.

“The day after, if we were to divest, we’re still going to turn on the lights,” Bacow said. “We would still be dependent on fossil fuels.”

Other faculty members on the panel discussed recent decisions by other institutions of higher education such as Stanford University and Middlebury College to divest from the fossil fuel industry as well as the political consequences of Harvard’s divestment from fossil fuels.

“When are the moments in which Harvard can have immense influence in society and decide to be an ethical thermostat rather than apolitical thermometer?” West said.

Ilana A. Cohen ’22, a member of Divest Harvard who moderated the panel, said it was an “invaluable night.”

“I think that that was an unparalleled kind of opportunity that I'm very appreciative that we had the chance to see out in real life tonight,” Cohen said of Bacow’s presence on the panel.

After the moderated portion of the forum, Harvard affiliates asked questions of the panelists.

“I just wanted to call out what racism looks like,” Abdelrahman said.

In response, Bacow said that he had met with the prison divestment group “multiple” times but that “civil conversation” ended when the activists laid out their demands. In a March meeting with the group, Bacow told HPDC members that he responds to “reason,” not “demands.”

“This is something that, unlike the fossil fuel divestment issue, which has been on the agenda of the Corporation and the University for a long time, to my knowledge, has not been before us previously,” Bacow said.

Thursday’s forum comes ahead of a revitalized “Heat Week” campaign set to take place during the last week of April.