Khalid’s ‘Free Spirit’ Still Has Some Growing to Do 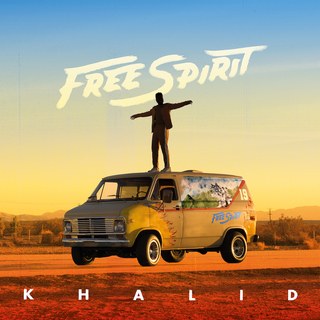 Khalid’s much-anticipated sophomore album “Free Spirit” picks up right where his previous EP “Suncity” left off — with Khalid leaning on the ripe side of the thin line between boyishness and manhood. With singles like “Talk” and “My Bad” hinting at the album’s general exploration of Khalid’s love life, the buildup to the album’s release was simultaneously accurate and misleading — accurate in how representative it was of the album’s overall aesthetic, yet misleading in its erasure of the darker, wiser aspects of the album that weren’t fully fleshed out, if invoked at all, in “American Teen” and “Suncity.” Though “Free Spirit” more often than not falls into the generic pop trap, a few hidden gems suggest Khalid’s personal and artistic growth.

For all his apparent romantic foibles, Khalid recycles parallel, if not indistinguishable, experiences in his love life that make for a homogenous — and almost tiresomely cohesive — album. The first and perhaps strongest song on the album, “Intro,” is one such (starcrossed) love song that avoids falling into the aforementioned trap. This has much to do with its “cinematic” quality, as Khalid himself describes it. The track is essentially a repetition of lingering, electric riffs that bleed into one another, like the different aspects of Khalid’s personal life, from romance to mental health. Khalid’s sweeping vocals complement the instrumentals seamlessly, the perfect backdrop for mournful lyrics about prioritizing himself after a love lost. “Couldn’t have known it would ever be this hard / Ooh, we had it all, but we lost and that's our fault,” he sings. “But I'm never giving up on word, I've been / I've been focusing on putting me first.”

Khalid’s honesty is at first refreshing; that is, until he dives into another retelling of a similarly endured relationship — and another, and another. By the next song, “Bad Luck,” Khalid warns that “Now, if you're gonna leave me / You better run far away / I’d hate for you to leave me attached.” In “My Bad,” he takes slight responsibility for his own role in the same (or not) relationship: “Blowin' me up, you've been wildin' / We was cool, yeah, we was vibin' / Gotta put my phone on silent / So my, my, my, my bad.” The recurring theme crops up throughout the rest of the album, from “Right Back” and “Don’t Pretend” to “Bluffin’” and “Heaven” toward the album’s end, making for an ultimately underwhelming, uninspiring motif.

Khalid’s strengths emerge, like in his previous LP “American Teen,” in the spaces that lie between his struggle to cope with growing both a little and a lot older and the ensuing lessons he’s learned. Nowhere is this more subtly and almost misleadingly represented than in “Paradise.” The psychedelic instrumentals belie nostalgia for a more innocent time in Khalid’s life, when he didn’t have to face the future head on. “Oh, life don’t stop the more we pray / All your wrongs from yesterday / Smokin’ himalayan haze / Won’t wash all your sins away,” he rings in falsetto register. The wise words that follow speak to the contemplation and self-exploration Khalid has endured; for all the changes he’s experienced post-”American Teen,” the young pop star still prioritizes enjoying the slower, more mindless moments of life: “All the dollars you’ll spend / Give it up for nights like this / Don’t give into overthinking / Pour a drink when it ends.” In a similar vein, the less impressive “Hundred” nonetheless evokes his reconciliation with moving forward despite wanting to revel in the little things. “'Cause the world keeps spinning, the sun won't shine on my face / I'ma keep it moving, got a hundred things I gotta do today,” Khalid sings.

Khalid further explores his vulnerability when discussing how he’s grappled with his mental health. Unsurprisingly, like the song “Self,” “Free Spirit”’s strongest, most introspective songs are also the most sonically interesting. The track’s underlying, nearly eerie riff enhances the anxiety Khalid expresses and has been coping with. “I've ran away for miles / It's gettin' hard for me to breathe / 'Cause the man that I've been runnin' from is inside of me,” he sings. Appearing toward the album’s end, it’s a refreshing change to the monotonous drove of unsuccessful relationships he lists. Unfortunately, the album skews more toward the latter than the former. It seems that for all he’s learned, Khalid has yet to perfect the thematic balance “Free Spirit” lacks.

— Staff writer Mila Gauvin II can be reached at mila.gauvin@thecrimson.com.