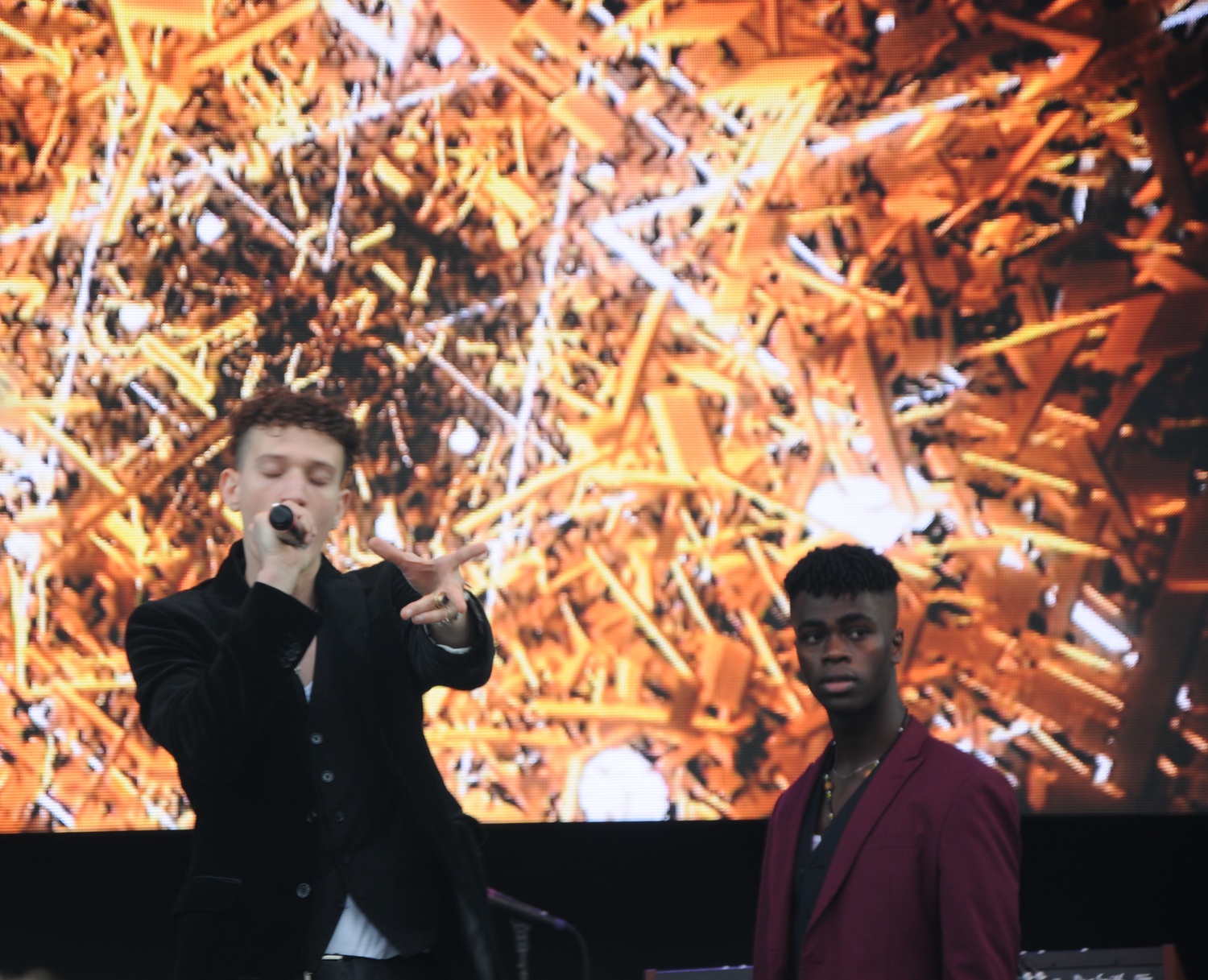 Lincoln A. Hart '21 and Michael A. Osei '21 perform at Yardfest. By Camille G. Caldera
By Mariam A. Sousou, Contributing Writer

Between performing at the Student Organization Center at Hilles, opening for Yardfest, and releasing their debut mixtape “Harlem Nights,” student musicians Michael A. Osei ’21 (“MJangles”) and Lincoln A. Hart ’21 have a lot to juggle outside of the classroom. The co-founders of the music collective Maybe There’s Life sat down with The Harvard Crimson to chat about their whirlwind of a year.

The Harvard Crimson: When did you both start writing music or producing music?

Lincoln A. Hart: I was an instrumentalist and songwriter before I started recording. My father taught me how to play guitar, and I grew up [playing] in jazz bands. When I got to high school, I started getting more involved with rapping and freestyle. I taught myself how to produce just for myself so I wouldn't be reliant on other people. Senior year of high school is when I really started producing beats for myself, but it wasn't until my freshman year here that I became committed to not using any other person's beats to make the songs that I produce.

THC: You both have your own albums as solo musicians. When did you begin Maybe There’s Life together?

MAO: Lincoln and I have often talked about just having complete ownership and creative control over our content for perpetuity of our careers. Then he introduced me to the third member of Maybe There's Life, Tobias Defoe, who's a student and full time musician in New York. The idea of it was solidified this past summer because we were working on music from time to time, and we thought what if we just come together? Then we had our record label launch in December 2018. We had a big performance in the Quad, and that was like the official announcement of Maybe There's Life on this campus.

LAH: We want to make sure it's clear that we are fully solo artists within our own rights. We all view the collective of Maybe There's Life as an opportunity to stand together in solidarity against the forces of the music industry and to be fully autonomous as artists and performers.

LAH: I think what makes our collab tape that's coming out on Saturday, “Harlem Nights,” so unique is that it's so truly collaborative in every aspect of it. It's not just one person making the beat, another person writing lyrics, and the other person writing the melody. Every drum pattern, every drum sound, every chord, every rhythm, every lyric is three people fully hashing it out.

THC: What is the message you’re trying to send with your music?

MAO: I make music for the people who have grown up in situations where they were consistently told that there's a certain path of success that they need to follow — often, namely being like a doctor, lawyer, or professor — and you just can't help but dream of that other calling.

LAH: We're storytellers, and I can’t think of my artistic mission as one concrete story. Musically, a lot of my artistic purpose is pushing boundaries and speaking about spaces in between extremes.

THC: How do you see yourselves pursuing your musical careers here, at Harvard, and then beyond Harvard?

MAO: I know that all I'm meant to do on this earth is to make music, challenge people's thought processes, and inspire them to try to shape their own futures. I plan on just continuing to make as much music as possible in that room up there and put on as many performances as possible until I reach a point where I'm able to go beyond this campus and go across the world.

THC: Do you feel that so much is expected of Harvard students you face judgment from other students or people who look down on you?

MAO: I’ve written a whole song about it called HUID! I'm not sure about students in particular on this campus judging in a negative light.

LAH: I think a lot of [the judgement we receive] stems from people's conception of what a rapper is. They think that it's fun work. There's this image of people chilling in a studio, doing mad drugs, saying some random stuff over a beat, and calling it a day. That's so uncharacteristic of the kind of work we're doing. I've never worked harder on any single project or anything in my life. It's 32 minutes of music in four weeks. It's not glamorous work all the time. I think that, Mike and I, what we're trying to do is about what real hip hop is and what it started out to do. It’s purpose was to educate and uplift the community.

THC: Do you guys feel you're uplifting Harvard? How was your performance at YardFest and in the Quad in December? How did it feel being able to perform to Harvard students?

MAO: It was exhilarating to be able to perform for that many people. I never had a crowd of 1,500 to 2,000 people with a stage that epic looking.