‘The East Side’ Explores the Struggle of Living in the West 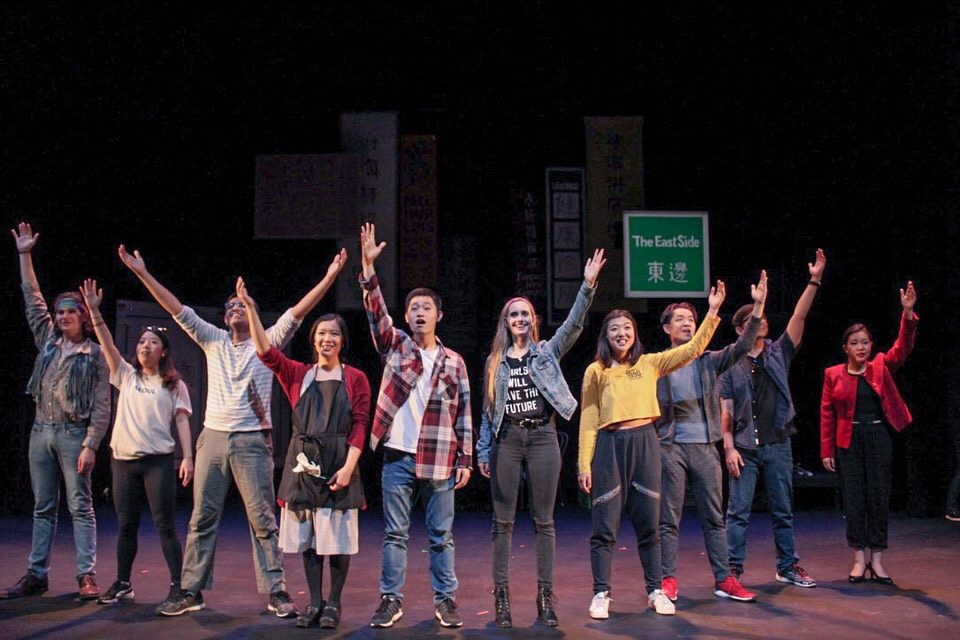 The cast of "The East Side" performs their final number. By Courtesy of Angela E. Kim
By Vivien L. Tran, Contributing Writer

What does it mean to be Asian-American and proud? SAT practice tests and avocado tteokbokki are two of the many things that come together to tackle this question in “The East Side,” an original musical that ran in Farkas Hall from April 11 to 14 under the direction of KeeHup A. Yong ’19. Put on by Harvard Asian Student Arts Project (Harvard ASAP), the show follows a 17-year-old boy named Ryan Chen (Jason Yoo ’21) struggling to reconcile his Chinese identity with his passion for art, amidst New York City’s swiftly gentrifying Chinatown. It is the essential bildungsroman, full of heart and humor, as Ryan struggles to accept his Chinese heritage even as he feels excluded because of his differences. With its powerful ideas of gentrification, family, and identity, along with incredibly catchy and unique music and set design, “The East Side” is a fun and heartwarming production.

The musical focuses on Ryan, the only son of Ms. Chen (Bo Young Choi ’17), a single mother and the owner of Chen’s Dumpling House. He and his two best friends Patrick (Phiroze K. Parasnis ’21) and Vera (Ramona Park ’22) hang out in his mother’s empty restaurant and go to SAT practice sessions, spending their days getting ready for college. One day, Ryan meets Michelle (Rocket Claman ’21) and just like a “guy from the movies,” as Vera so aptly states at one point, he falls in love with her. His romance with Michelle, along with the Dumpling House’s impending eviction and his desire to escape the East Side, all come to a head and force him to confront his values and decide what he truly believes in.

Much of the liveliness of the musical come from its set design and music, both of which shined onstage. Various building signs describing the setting hung behind the actors, written in Chinese and Korean. The colorful backdrop added a rush of energy to the theater, and each scene change came with a different prop or sign, equal in vibrancy. The crowning feature of set design[,] however, was the Chen’s family truck. What served in the beginning as the sign for the Chen family restaurant and a space for Ryan’s art was ultimately able to combine both the dumpling house — a connection to his culture and history — and his passion for art, a beautiful representation of joining the past and the future of Ryan’s life.

The accompanying music was no less impressive. A small ensemble occupied the back right of the stage, providing a wide range of instrumentation to accompany each performance. During one of Ryan’s SAT practice exams, the upbeat and fun-filled music exuded a light and simple aura as students sang out their frustrations. When a famous chef announced her goal to “help” (read: gentrify) a Chinatown restaurant, actors vocalized eerie notes alongside soft, jarrying chords. The lyrics of the songs themselves were equally evocative, catchy, and easy to follow.

Set design and music underscored the writing of the musical, driving the story. Co-writers Julia H. Riew ’21, John Lim ’20, and Jared Leong (a student at Emerson College) wove together intricate themes of family, culture, and passion as Ryan questions his identity and struggles with his pride in being Chinese throughout the entirety of the play. Chen’s Dumpling House and the dumpling itself highlight Ryan’s journey. When he first meets Michelle, he throws in the fact that dumplings “have 1000 years of history” as a way to grab her attention. His mother uses the same phrase towards the end of the musical, this time with much more emotion behind it. The change in meaning, even in this one short phrase, illustrates the depth and emotion of each character and the multiple meanings of being Asian American.

For all its incredible production value and plot, “The East Side” could have made more use of its secondary characters. Their obligatory bubble tea mentions and personalities exaggerate the overall message, and characters like Michelle, Ms. Chen’s friends, and at times even Patrick and Vera are funny but rarely insightful. It is Choi’s performance towards the end that redeems this oversight. In a truly touching scene, Ryan’s mother finally teaches him how to make dumplings, belting high notes perfectly and powerfully delivering line after line with emotions that feel real and true. She tells Ryan that the Dumpling House was never her dream; she wanted to travel and escape the world she lived in her whole life as well. “Ryan, my dream is for you to have that option," she says. "The choice to do whatever you wish to do with your life.” Choi strongly holds her gaze as she asserts each word loudly and clearly, her body posture expressing wisdom and love, strength and determination. It is easily the highlight of the entire musical.

People struggle their whole lives to understand what it means to live in America as an Asian and to be Asian American. In its careful construction and heartfelt attention to detail, “The East Side” delivers the right punchlines and messages to convince the audience that there is power and hope in the struggle of understanding who you are and where you come from, even if it does take a bit of time.