The Prospects and Plights of Instagram-Inspired Streetwear 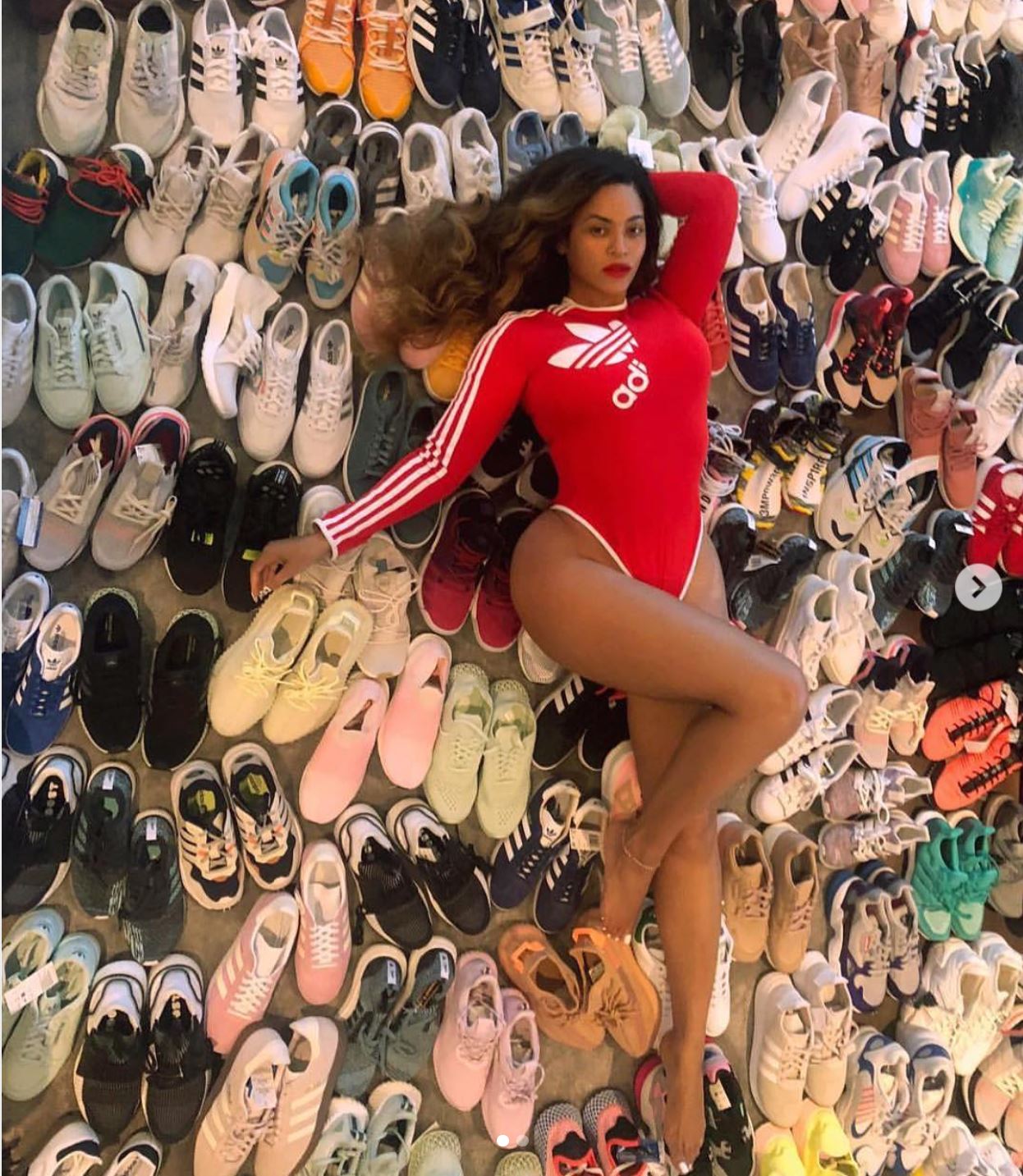 Beyoncé reclines on a sea of shoes. By Courtesy of @beyonce
By Shruthi Venkata, Crimson Staff Writer

In one of @liljupiterr’s recent Instagram posts, a man proposes to his partner with his shoe right next to his foot — presumably because he would not want to crease his Cactus Jack 4 Jordans while kneeling. His other posts feature Kanye power-walking, wearing layers on layers and bright red sweatpants cuffed into pink socks, Beyoncé wearing a red Adidas bodysuit reclining on hundreds of shoes, and sorted Lucky Charms marshmallows lined in rows next to a rolled 20 dollar bill, as if they are about to be snorted. @liljupiterr’s page is not purely fashion, although the New Yorker applauds him for his inscrutable hypebeast cool, because there is much more than clothing in the mix. I take fault with identifying him as a simple “influencer” because he has too much of a personality — my favorite online — but what does it mean when your personality is underpinned by brands, or becomes a brand of its own? In an era that blends streetwear with celebrity fashion, thanks to a certain brand of Instagram account, it becomes difficult to distinguish capitalist schemers from fashion visionaries.

What is @liljupiterr’s brand? Influencers have many distinct styles of curation. By one oversimplified delineation, one common brand is targeted at middle class white girls that go to music festivals, and another is targeted at people that admire New York high fashion designers who follow in the vein of European couturiers. @liljupiterr’s feed blurs the line between high culture and street culture, or rather transforms the latter into the former in the most novel fashion. @liljupiterr juxtaposes Lucky Charms, drugs, and memes with haute couture sneakers — many of which are rare, beautiful, and custom-made. They do not come out of big-name fashion houses, but instead brands that have been voted up by larger numbers of regular people who value style — although they are becoming those fashion houses through collabs and soaring demand. Streetwear further aims to incorporate high fashion into its look — @liljupiterr’s subjects wear Dior, Versace, Gucci, and Balenciaga, and those brands have visibly taken inspiration from streetwear. @liljupiterr provides more (stylistically if not financially) accessible high fashion, which many can appreciate much more than the clothing of siloed fashion houses that could not be worn day-to-day. 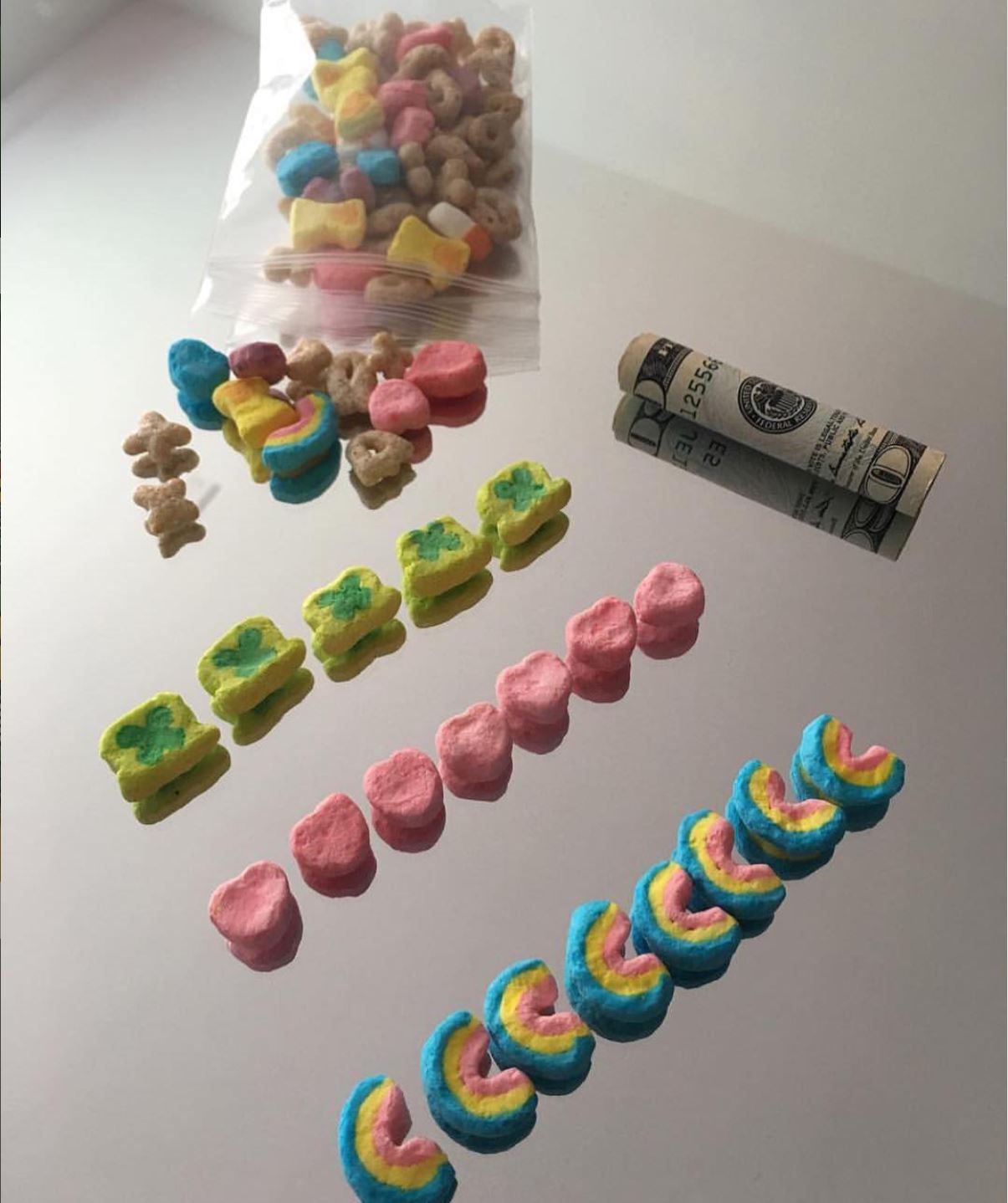 A @liljupiterr post from April 25th features lines of Lucky Charms marshmallows. By Courtesy of @amooolia

@liljupiterr’s fashion could only be conveyed through his motley feed. @liljupiterr does the hard work of cherry-picking clout, not only in terms of fashion. If you like his fashion, it is likely because you have similar overall “taste” — it creates a positive feedback loop of validation in which liking his general feed means you like his fashion sense, which again means you probably like his non-fashion visual Instagram personality. The artists most represented are Kanye and A$AP Rocky (two artists whose music I love), skateboarders are rampant (I skateboard), and random posts, like a TI-84 reading “SOMETIMES THE WAY YOU THINK ABOUT A PERSON ISNT THE WAY THEY ACTUALLY ARE,” indicate interest in a specific type of message. In a way, fashion becomes about your sense of humor, taste in cars, and taste in art as well — @liljupiterr’s feed is a remake of how the fashion industry markets itself through association with other “attractive” culture.

It is exhilarating to see the way that an unparalleled culture is manifest in streetwear Instagram pages, especially @liljupiterr’s. But streetwear in other places and accounts can also be appropriative. It stems from black culture, and it has become a trend that many white boys who don the same several-hundred-dollar streetwear styles are the same ones who idolize black culture and listen to hip-hop and rap as they dap each other up and use black slang. Popular Instagram accounts can provide a form of democratic validation of style — as opposed to large, predominantly white companies like Vogue spotlighting black styles late and promoting them on their platforms — but on another, they play into the same bind of idolizing certain labels, be it Jordans, Nike, Adidas, or Louis Vuitton.

@liljupiterr, along with other accounts like @thupreem, the lesser known sneaker account @bigktheboss, and a number of others, elevate a select few brands — this much is shared by all influencer accounts. He simultaneously provides an ironic critique of brand obsession: There are photos of a roll of toilet paper with Nike check marks on each perforated sheet and sneakers with butchered brand names. He disproportionately shares collabs with “AIR” written in quotation marks, or in another, “FOR WALKING,” on the shoe — the quotes add an element of irony. @liljupiterr is wonderfully self-aware for mocking the materialist, brand-oriented culture he celebrates, unlike most influencers.

Still, the culture of streetwear, especially on Instagram, is predominantly male. @liljupiterr’s page features a number of re-shares of women in bikinis, implying that this is what it takes for women to fit into an aesthetic of skater boys and artsy kids. It promotes highly specific beauty norms, such as the body types and facial features, many like those of the Kardashians, and much of it is marketed to the male gaze. @liljupiterr, like much of the culture of streetwear, is not all-encompassing and while innovative, sometimes fails to be progressive.

While Instagram streetwear is often consumed by an appropriative audience and sometimes edges on sexism, it is a part of fashion culture that has so many merits. It is ridiculously inventive, in a way for which only high fashion used to be credited. It shifts the source of merit in fashion from Eurocentric standards to the urban population of whichever locale it pertains to and the people, including those of color, that define and evaluate it. Instagram pages can provide a zeitgeist and render visible all the nuances of what people like, in addition to being a platform for people to curate, inspire, and consume art.