‘The East Side’ Takes On Asian-American Identity Onstage 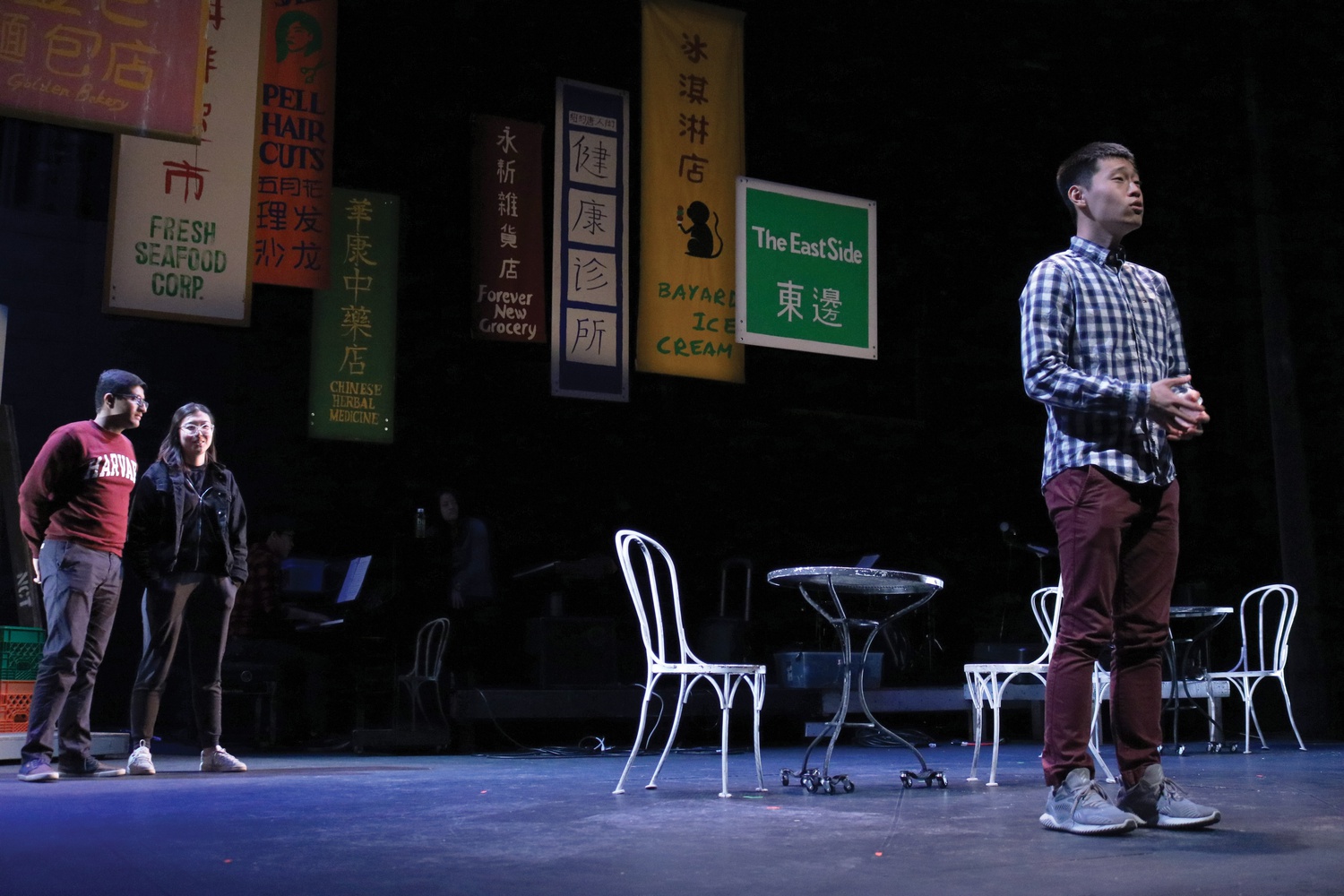 The cast of "The East Side" rehearses in preparation for opening night. By Jonathan G. Yuan
By Woojin Lim, Contributing Writer

“The East Side,” the inaugural Harvard Asian Student Arts Project (ASAP) production at Farkas Hall, tells a tale of authenticity, identity, acceptance, and above all, love of all kinds.

This original coming-of-age musical comedy follows 17-year-old Ryan (Jason Yoo ’21) and his struggle with his developing identity as an American-born Chinese student. Ryan and his immigrant mother, Ms. Chen (Bo Young Choi ’17), run a family restaurant in New York City’s Chinatown called “Chen’s Dumpling House.” Dulled by life at the restaurant, yet full of youthful ideals, Ryan struggles to balance the typical high-schooler’s life: spending time with his friends, studying for the SATs, and pursuing his romantic interests, while also tending to his one true hobby, painting.

Ryan’s struggle to choose between his “Eastern” and “Western” identities in Chinatown, the East Side of New York City, is where Julia H. Riew ’21, musical co-writer and ASAP co-president, derived the musical’s titular inspiration.

Riew said that the lack of Pan-Asian representation in the musical theatre industry compelled her to amass a group of Asian artists on campus for this feature production. “There are more musicals starring a man named Charlie than there are musicals with Asian characters that I can think of, especially if you only consider musicals that are with Asian characters that are not offensive or stereotyped in a certain way,” Riew said. “And then I guess I was thinking maybe I should write a story that maybe is a little bit closer to home for me.”

Yoo shares the same sentiments. “I guess we're trying to prove that there is a space for Asian-Americans as well to do theater and do the arts. We’re not just confined to the stereotypes,” he said. “It’s an exciting, fun, non-typical way to represent something that’s usually not represented in theatre.”

Yoo hopes the audience will be pushed to grapple with deeper questions of identity and authenticity. “I think the overall message of the musical is don't lose sight of who you are just because conformity is an easier path. You should always stick to your heart to make who you are as a person,” he said.

“The East Side” is set to showcase an array of “scenic spectacles” and “cool practicals,” as described by Lights Designer Kat C. Zhou ’17. “You'll see these bulbs that fly in and we have these sort of fake neon signs. We're pretty excited about that.”

Co-producer Chloe I. Yu ’21, a Crimson multimedia editor, added, “The banners have been really fun to work on. Some of them are painted, and we use lights to illuminate them for Chinatown and Koreatown.”

In terms of the musical repertoire, Yu looks forward to the SAT song, where every single letter that the students bubble in, “A, B, C, and D,” corresponds to actual musical notes. “So when they sing D they're actually singing the note D as well as the letter D,” Yu explains.

Director Keehup A. Yong ’19 said of the music, “I think the music is the most catchy that I've ever heard in a musical. It's crazy. Once you've heard it, it doesn't leave.”

Yong spoke about the spontaneity and constant collaboration of the artistic process. This rang true in developing the dance pieces, most of which are hip hop-based, with one particular section featuring popping and locking. “Some of our cast members were tap dancers, so working with a choreographer and myself, we decided to add a tap number in,” Yong said.

When finally asked to summarize this entire project in a single catchphrase, Yong stumbled and took a long pause. “Dumplings, love...and gentrification,” he said. “That’s what this story is all about. It’s about food. It’s about different types of love. And it’s about how a setting changes the people within the space, but also how a space changes based on societal pressures.”

The East Side will be at Farkas Hall from April 11 to April 14. Tickets are free.