‘The Iron Throne’ Ends ‘Game of Thrones’ With Plenty of Questions 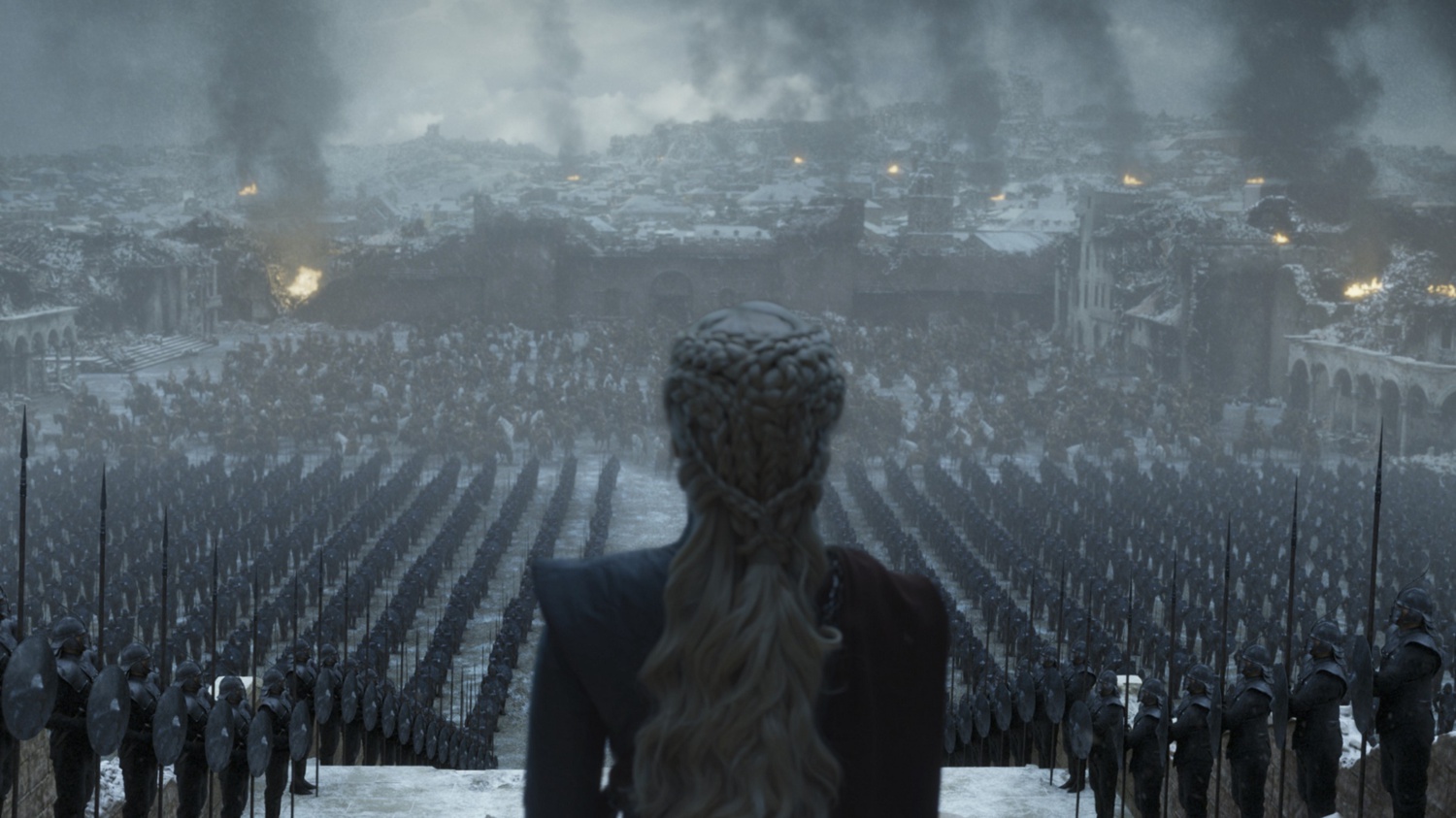 Emilia Clarke in the final episode of "Game of Thrones." By Courtesy of Helen Sloan/HBO
By Caroline E. Tew, Crimson Staff Writer

This review contains spoilers for the “Game of Thrones” series finale.

“There’s nothing more powerful in the world than stories,” Tyrion tells the ladies and lords of Westeros. It is precisely that — stories — which drew in over 40 million viewers per episode of “Game of Thrones” final season. But, with a world as large as the one in “Game of Thrones,” some stories will have a satisfying ending while others will not. With all the hype surrounding the final episode and so many different fan theories, the showrunners were ultimately going to leave fans unsatisfied in some way or another. While a certain amount of dissatisfaction is expected and acceptable, the real problem is the various ways that important characters were underutilized in the final few episodes or underdeveloped throughout the show.

Logistically, Bran makes sense as a king: He can learn from the mistakes of the past and know when an ally is planning on betraying him, while his fundamental lack of emotion should supposedly keep him from getting power-hungry. However, since Bran was always meant to be king, the writers of the show have done fans a great disservice by leaving his character wholly underdeveloped. Bran doesn’t even make an appearance in Season Five because he was, as showrunner David Benioff claims in an interview with Entertainment Weekly, “entering a training period… which isn’t particularly cinematic.” But if Bran is important enough to be king of Westeros, fans deserved at least a taste of what was going on in that cave during Season Five. At this point, there are far too many questions about the historical purpose of the three-eyed-raven, his connection with the Night King, and how, exactly, his powers are able to influence the past (which the incident with Hodor only hints at). While Bran is a logical choice for the throne in the eyes of Westerosi, he’s a bad choice as far as fans are concerned: We don’t know enough about him and his personality displayed the last few seasons has not made him particularly endearing.

Sansa and Arya were both drastically untapped: Although they both get a happy ending, it’s not satisfying in the least. Sansa has become a master manipulator and a skillful politician, learning from the show’s greatest masterminds like Littlefinger and Cersei. In this final season, she is reduced to a gossip, passing on secrets to Tyrion and sitting on the sidelines. Her character has been carefully crafted over seven seasons to create the perfect storm, and nothing would have been more satisfying than to watch as Sansa pulled strings behind the scenes and ended up on the throne.

Similarly, Arya fails to do much of anything in this final episode. After her epic ride through the decimated streets of King’s Landing at the end of the last episode, it seemed that Daenerys had finally made it onto Arya’s kill list. Instead of capitalizing on the mounting tension they created in the last episode between Arya and Daenerys, Arya sat on the sidelines with Sansa. Perhaps most disappointing is the show’s inability to take advantage of Arya’s unique ability to wear other faces. She hasn’t used this power since the first episode of Season Seven, and while it would be gimmicky to employ it over and over, the show shouldn’t have spent seasons training her if it wasn’t going to play an integral part in the final season.

And in the end, some things just don’t make sense. Why did none of the other six kingdoms think to secede after Sansa took the North? Is everyone really okay with letting Bran, who has never left the North, rule everything else in Westeros? Why did Grey Worm so easily let others make the decision about the next ruler and Jon’s fate? Could no one come up with a better name for the new king than Bran the Broken?

Despite it all, the final episode and this season as a whole were truly a cultural experience. The image of Daenerys looking out over her armies, as Drogon spreads his wings behind her, is absolutely breathtaking. Jon’s betrayal was a surprise up until the moment he killed Daenerys. Watching Drogon melt the Iron Throne behind Daenerys’ dead body, knowing that she never got a chance to sit on it, is a picture fans will not soon forget. Brienne’s final homage to Jaime — completing his entry in “The Book of the Brothers” with “Died protecting his queen” — is heartbreaking. There were many little moments in this final episode that were done just right, and these scenes should not be overlooked.

As its events didn’t turn out as many expected, ultimately a lot of fans will be rightfully dissatisfied with the ending. There are questions still to be answered, but maybe that’s to entice viewers to watch future spin-offs of the show. Regardless of the disappointments that riddled this final season, “Game of Thrones” nonetheless produced some of the best TV moments of this decade and for that, we should always be grateful.