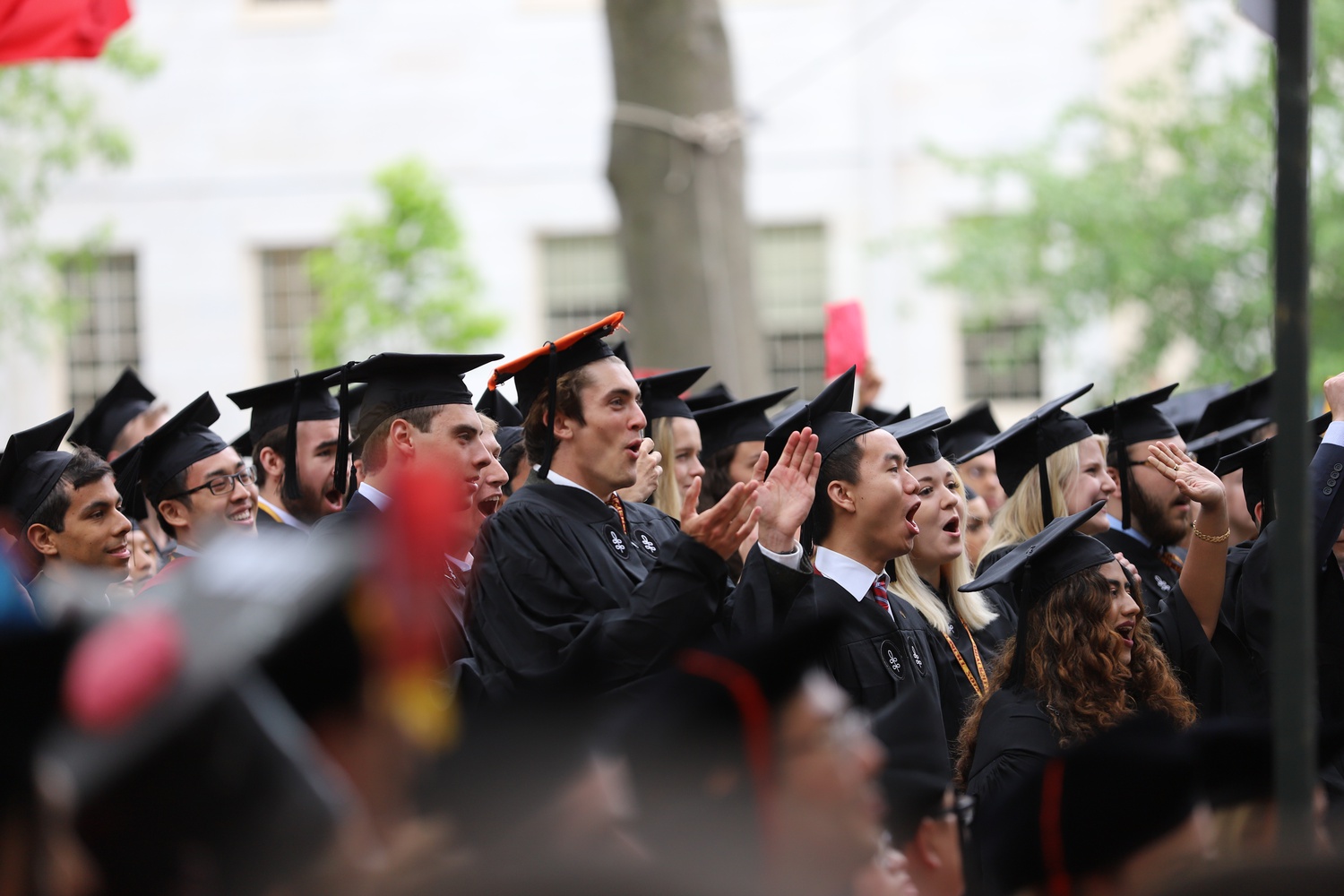 Members of the Harvard College Class of 2019 stand and cheer as their degrees are conferred during Morning Exercises. By Kathryn S. Kuhar
By Alexandra A. Chaidez and Aidan F. Ryan, Crimson Staff Writers

In his first Commencement as University President, Lawrence S. Bacow conferred 1,554 bachelors of arts and bachelors of science degrees to the Class of 2019 during the morning exercises at Harvard’s 368th Commencement.

Bacow awarded 6,665 degrees to students across the University — including College seniors, students from Harvard’s graduate schools, and students from the Extension School — in Tercentenary Theatre Thursday. Thousands of family members, faculty, and distinguished guests crowded the Yard to participate in the traditional festivities. 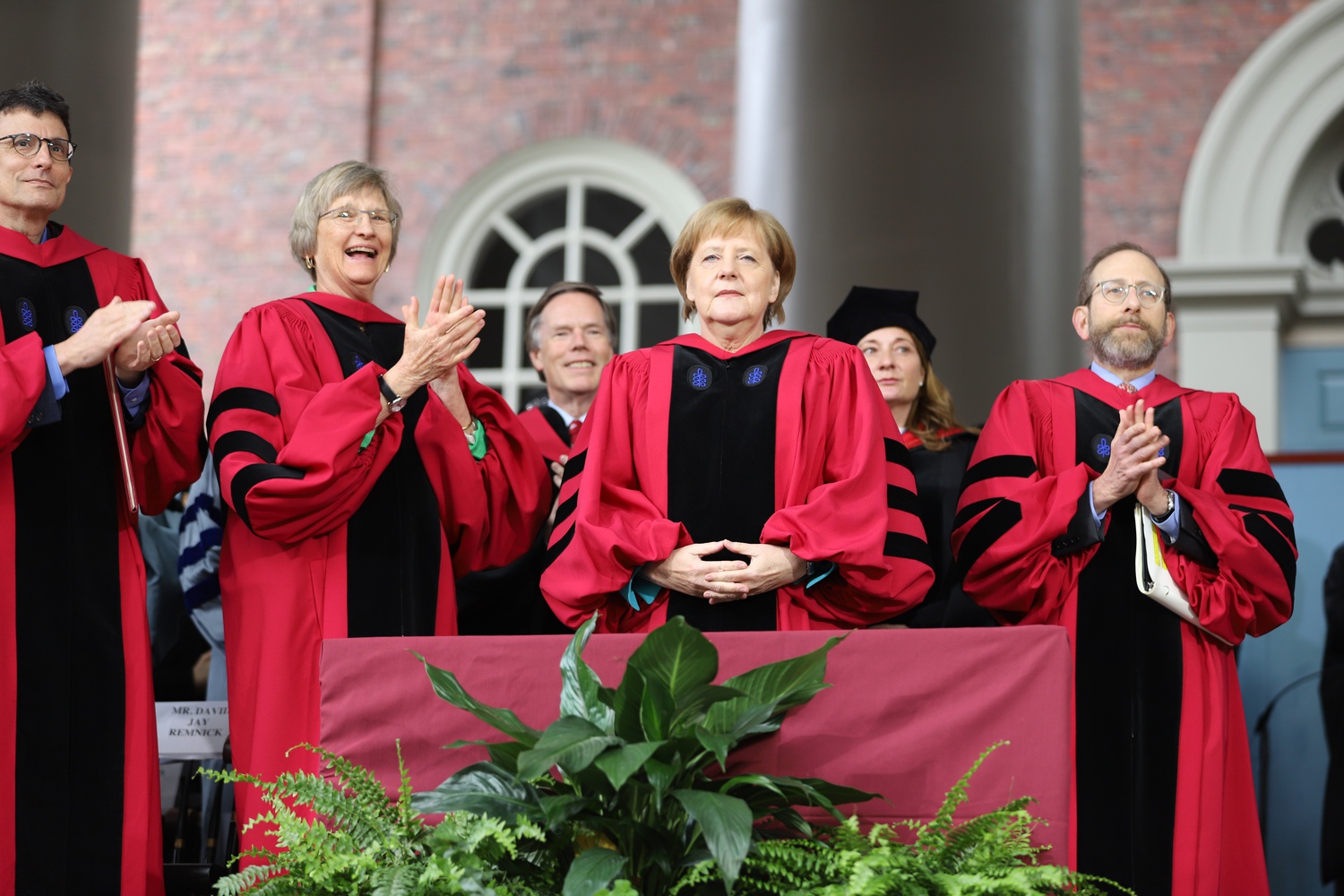 The crowd gives a standing ovation to German Chancellor Angela Merkel as she is introduced as the recipient of an honorary degree. By Kathryn S. Kuhar

De Lo Santos recounted her childhood growing up in the South Street Housing Development in Boston, a place she said still “feels worlds apart” from Harvard. She spoke about her family’s close relationship with their neighbors who watched over them during troubling times, comparing these connections to the ones she formed during her years at the College.

De Lo Santos encouraged the graduates to “be conscious” of the privilege their degrees awarded them and give back to the world.

“Let us reflect, but more importantly, be conscious — conscious of the weight that our education holds, conscious of all those who simply do not have the opportunity that could have rightfully been someone else in our place” De Lo Santos said.

In her speech, Takjerad told the story of her illiterate mother who left war-stricken Algeria only after a man signed her name on a list, the only way to leave the country at the time. In remembering her mother, Takjered reminded the Class of 2019 that the little things in life can have a powerful impact.

“The power of little things, the least you can do, can bring real change,” Takjerad said.

Following the student speeches, University Provost Alan M. Garber ’76 introduced the deans of the various schools who presented degree candidates to Bacow. After his presentation of Harvard Business School candidates, Dean of the Business School Nitin Nohria took a moment to congratulate his daughter Ambika Nohria ’19, a graduating senior in Adams House.

After Bacow conferred bachelor's of arts and bachelors of science degrees, several College students supporting fossil fuel and prison divestment and holding up posters began chanting “divest or this movement will not rest” and “divest, divest, divest and reinvest.” Some students at other schools soon joined the chorus of chants. 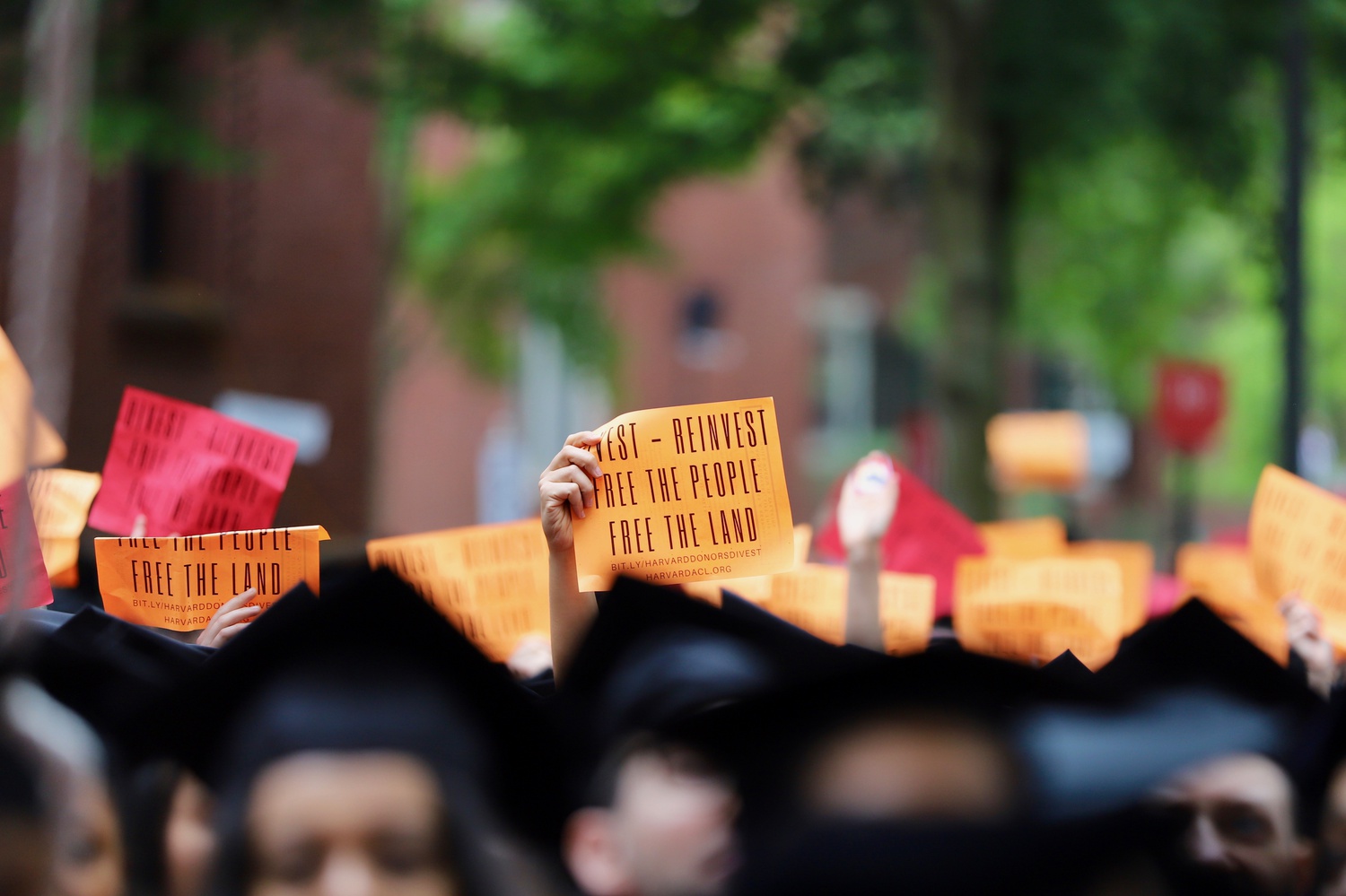 During Morning Exercises, some students in the crowd held up orange signs as part of the divestment movement. Orange is the color of fossil fuel divestment. By Kathryn S. Kuhar

Divestment protests also decorated their graduation caps with orange fabric and signs to draw attention to their cause. Divest Harvard and the Harvard Prison Divestment Campaign organized this protest as a part of a larger push to urge alumni to refrain from donating to the University while it is still invested portions of its nearly $40 billion endowment in the fossil fuel industry and companies tied to prisons.

Former United States Vice President and 2019 College Class Day speaker Al Gore ’69 joined student activists in calling on Harvard to divest its holdings from fossil fuels in his address Wednesday. Bacow has repeatedly said the University will not divest its investments in fossil fuel companies, arguing that the endowment should be not be used for political means.