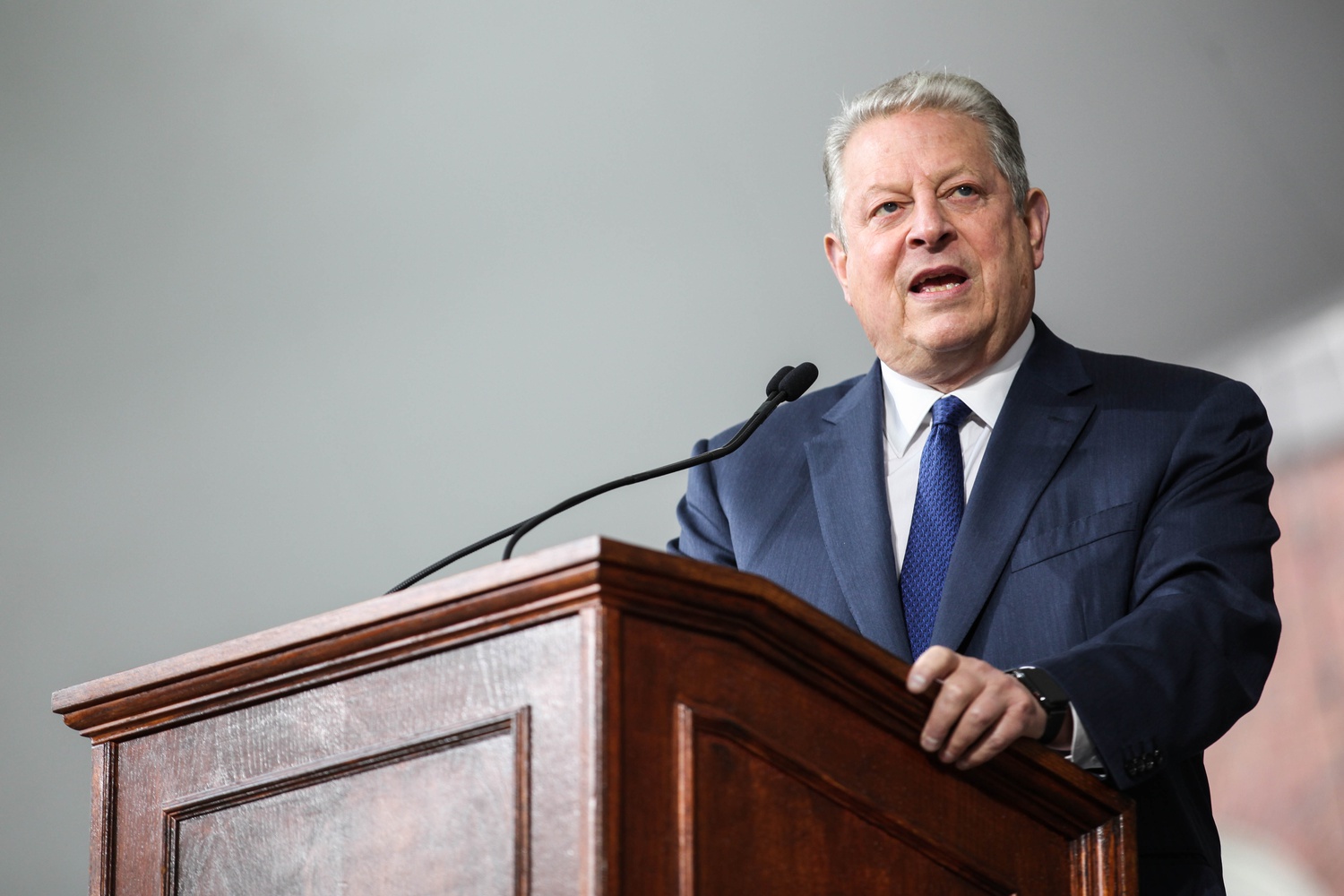 Fifty years after he picked up his own Harvard diploma, former United States Vice President Al Gore ’69 returned to Harvard Yard, looked out over the Class of 2019, and called on the University to divest its holdings in the fossil fuel industry.

Since he left public office, Gore has become an outspoken environmental activist, winning the Nobel Peace Prize for his work in 2007. He said Wednesday during the College’s Class Day that climate change is “a threat to the survival of human civilization as we know it” and that divestment is “a moral issue” for Harvard.

"Why would Harvard University continue to support with its finances an industry like this that is in the process of threatening the future of humanity?" Gore asked the crowd amid loud applause and cheers.

Gore’s speech centered on what he deems are “twin” global crises — climate change and the rise of “would-be authoritarian” politicians including President Donald Trump. He challenged members of the Class of 2019 to dedicate their lives to reinforcing democratic ideals and reversing the negative impact humans have had on the environment.

Gore’s comments come after a wave of student activism this semester — including petitions, meetings with administrators, rallies in the Yard, and protests calling on the University to reconsider some its investments.

Both Divest Harvard and the Harvard Prison Divestment Campaign — two campus groups supporting fossil fuel divestment and divestment from companies with ties to prisons, respectively — called on alumni earlier this week to suspend donations to the University until administrators meet their demands. The two groups have also called on graduating seniors to sign the donor pledge and to wear orange during Thursday’s Commencement ceremony to show their support for divestment.

The University previously divested from the tobacco industry in 1990 and from some companies with ties to South Africa’s apartheid government in 1986. University President Lawrence S. Bacow has repeatedly said Harvard should not use its endowment for political purposes. He said earlier this year that in the case of climate change, Harvard should move public policy through research rather than through its endowment.

Gore said Wednesday that climate change is a “moral issue” — much like apartheid and tobacco usage.

“It was immoral to continue investing in apartheid,” Gore said. “But the University did respond as they responded when they realized it was immoral to invest in tobacco stocks. Well, let me tell you that the oil companies and gas and coal companies today have been following the same strategy innovated by the tobacco companies years ago.”

University spokesperson Jonathan L. Swain wrote in an emailed statement that administrators are working to tackle climate change, in part through Harvard’s Climate Action Plan, which states the University aims to become fossil fuel-free by 2050.

“The commitments made in Harvard’s Climate Action Plan explicitly recognize what the science has made clear: the world must move quickly to end its use of fossil fuels,” Swain wrote. “While we agree on the urgency of this global challenge, we respectfully disagree with divestment activists on the means by which a university should confront it.”

Gore also spent much of his speech warning students about the rising threat of global authoritarianism and indirectly criticizing the Trump administration.

“The belief that free citizens can govern themselves wisely and fairly by resorting to logical debate on the basis of the best evidence available, instead of on the basis of the exercise of raw power, was and remains the simple premise of American democracy,” he said. “And it is precisely that premise that is under assault in our country today.”

Before and after Gore delivered his address Wednesday, graduating seniors reflected on their lives before, during, and after Harvard.

Eunice A. N. Mwabe ’19 gave the Harvard Oration, recalling a childhood spent watching American movies outside Nairobi, Kenya. She said that her time at Harvard studying anthropology taught her that “joy is joy” and “pain is pain,” regardless of national origin.

“I promptly began my field work outlining the rituals among American 20 year olds,” Mwabe said. “Their sociality, their tribal customs and norms, what they found taboo to talk about in public, their different kinship systems and values or concepts like personal space, and how 'how’s it going?' isn't actually a question about how it’s going.”

“Eventually I too began to participate in the natives’ rituals,” she added.

Nicolas D. Hornedo ’19 gave the Ivy Oration, cracking jokes about Jared Kushner, the 2000 presidential election, and Dean of the College Rakesh Khurana — who also spoke at the ceremony.

“It doesn't matter who we knew or what clubs we joined because when things went well, we all celebrated at Felipe's, when things went poor we all mourned at Jefe's, and we never ate at Zambrero,” Hornedo said. “We've got one day left. Don't make it your best, just make it count.”

A group of seniors concluded the event, singing a modified version of “Fair Harvard” with updated lyrics about Greenhouse Cafe and the new class schedule. As they sang, seniors shuffled to the steps of Widener Library to take their class photo.