Ahead of Commencement, Divestment Organizers Call on Alumni to Suspend Donations to Harvard 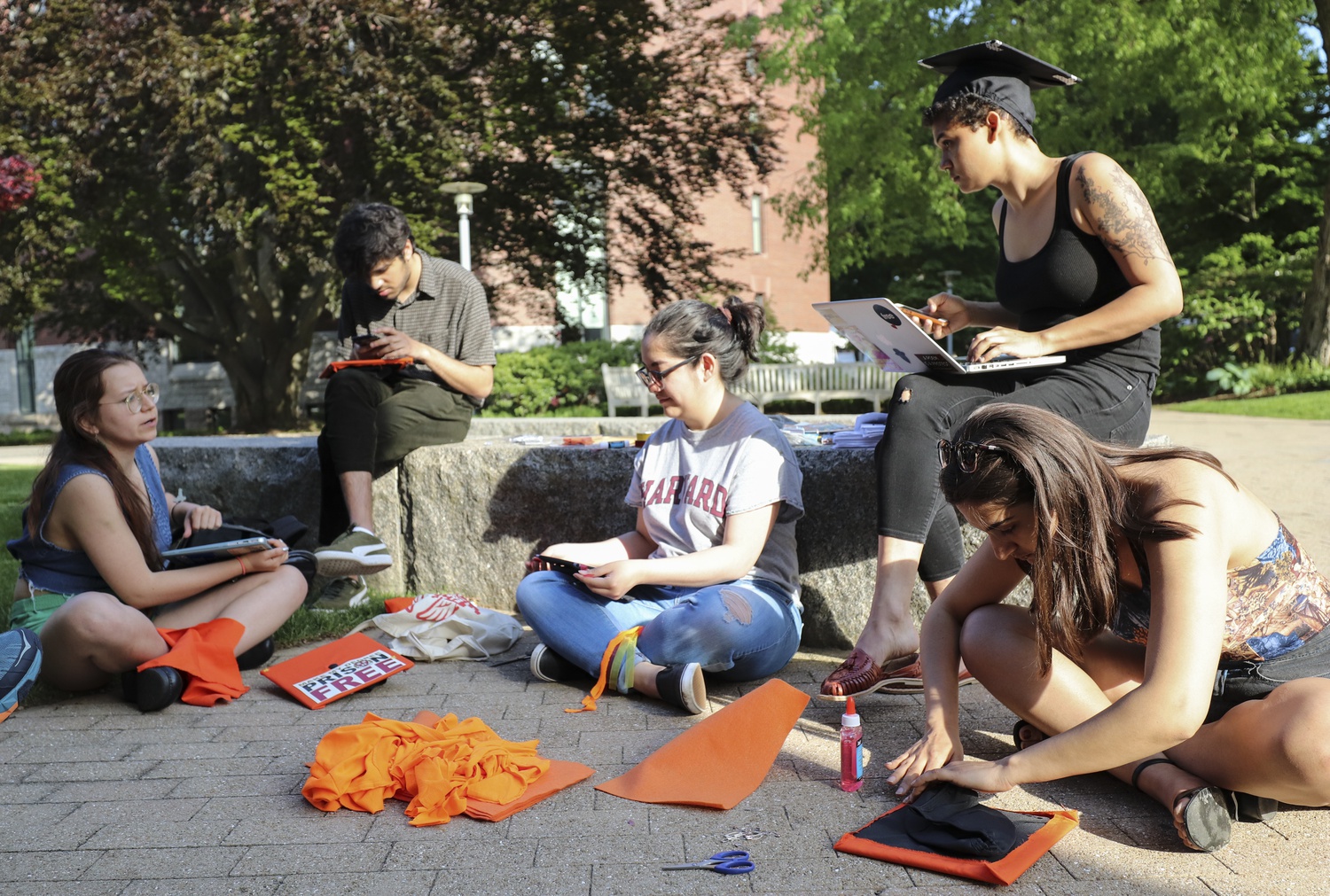 Members of Divest Harvard and the Harvard Prison Divestment Campaign decorate their graduation caps with orange cloth and felt outside the Casper Student Center Monday evening. Orange is the color of the fossil fuel divestment movement. By Kathryn S. Kuhar
By Alexandra A. Chaidez, Crimson Staff Writer

Harvard fossil fuel and prison divestment activists launched pledges this week calling on alumni to withhold donations to the University until administrators concede to their demands.

The campaign comes as part of a broader effort to publicize their causes during Commencement this year. Divest Harvard and Harvard Prison Divestment Campaign — which advocate for divestment from the fossil fuel industry and companies with ties to United States prisons, respectively — have called on students to wear orange to commencement and petition Harvard alongside the donor pledge.

The Harvard Prison Divestment Campaign released their donor pledge Monday, while Divest Harvard recirculated a pledge originally issued in 2017. Both pledges urge alumni to pause their donations to Harvard until it withdraws its nearly $40 billion endowment from fossil fuel or prison-related companies and reinvests its money in causes the groups believe to be more sustainable.

HPDC’s pledge reiterates its call for Harvard to disclose its investments in prison-related companies, divest from those entities, and reinvest in rehabilitating people affected by “the prison-industrial complex.”

“We, the undersigned, pledge not to donate to Harvard until it discloses its endowment holdings in and divests from companies that are profiting from the prison-industrial complex, and takes meaningful steps to repair harm and rebuild wealth for Black, brown and poor communities pursuant to the demands of the Harvard Prison Divestment Campaign,” the pledge reads.

HPDC’s pledge also encourages donors to invest in a new fund for organizations that will redistribute the donations among those locally affected by mass incarceration.

“We’re showing them that this is what reinvestment looks like,” Dunbar-Gronke said. “It looks like putting money into democratically led, community-led groups and pools where people who are most impacted by the harms that these institutions have benefited from then get to do with that money what is best for the community.”

“As result of conversation together, we also thought that now it might be a good time to relaunch and sort of strengthen this call across the College, asking everybody not to donate,” Flores-Jones said.

The pledge calls on Harvard to “show moral leadership” by divesting from fossil fuels and urges signatories to withhold their donations to the College until the University entirely divests its fossil fuel holdings and reinvests in “just and sustainable” alternatives.

This is not the first time Divest Harvard and HPDC have collaborated. In April, the groups coordinated a protest at the John F. Kennedy Jr. Forum during an event in which University President Lawrence S. Bacow was slated to speak.

The groups’ April protest came amid a semester of intensifying calls for fossil fuel and prison divestment. Divest Harvard and HPDC have held their own rallies in Harvard Yard, released several petitions, and met personally with Bacow.

In addition to the donor pledges, alumni from the classes of 1964 to 1975 wrote a letter in coordination with Divest Harvard and HPDC to Bacow supporting the two groups and urging Harvard to “play a far more public leadership role” in addressing the issues of climate change and mass incarceration.

Alumni who signed the letter — members of a particularly political generation on Harvard’s campus — said they saw divestment to be imperative.

“Investment in fossil fuels and prisons are moral evils,” Heather B. Cantino ’72 wrote in an email. “Harvard's wealth and commitment to science and truth obligate it to divest.”

Harvard Corporation Senior Fellow William F. Lee ’72 said he believes climate change is “one of the great existential crisis." He added that over the course of meetings with alumni and faculty about divestment, he has come to recognize the disagreements that exist among people’s opinions on divestment .

“As I’ve said at the end of many of these meetings, the one thing I can guarantee you in the Harvard community is there are enough different views that sometimes you have to agree to disagree,” Lee said in an interview last week.

Both Divest Harvard and HPDC are also uniting for another in-person demonstration during this year’s Class Day and Commencement. The groups are planning on wearing orange pins and wristbands for the College’s Class Day Wednesday and decorating their mortarboards with orange for the University-wide Commencement exercises Thursday.

"We are asking all students to use the space provided by their mortarboard cap to send the message to the University… and to anybody who might be watching this graduation ceremony that we will not remain silent and complicit in the actions that our university is taking elsewhere around the world,” Flores-Jones said.

“Essentially, we’re asking that our diplomas and degrees remain free of investments in the climate crisis and prison industrial complex, respectively,” she added.

Flores-Jones said these actions were an example of “joyful organizing” at the close of the academic year.