From Boston Calling 2019: Anderson .Paak and The Free Nationals Dazzle 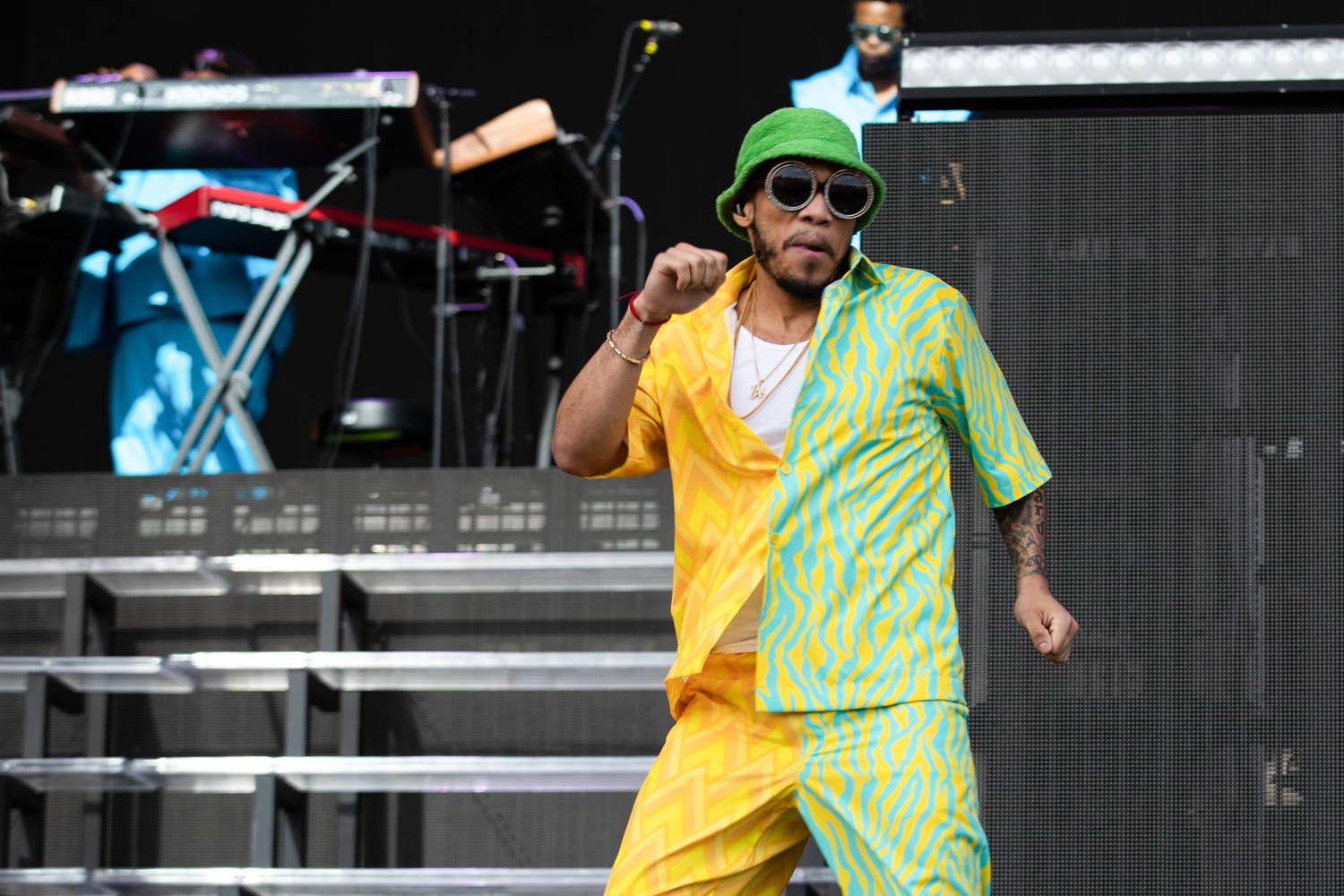 Anderson .Paak and the Free Nationals burst onto Boston Calling’s Green Stage Saturday night. First, men and women in cerulean bodysuits populated the stage: The Free Nationals. Next, Anderson .Paak emerged out of nowhere, playing a drum set painted with grinning lips reminiscent of the Rolling Stone logo on top of an on-stage podium. He wore an eccentric, summery outfit: a matching shirt and pants with separate patterns on the right and left halves, and a neon green bucket hat, topped off with a radiant smile, and — tints. Bringing variety in tone, energy, graphics, and lights, Anderson .Paak and the Free Nationals ran the gamut of performance possibilities — if they couldn’t win the crowd over with one call, they did with the next. The artists put on as literally and proverbially vibrant a show as the festival had seen thus far.

Opening with “Heart Don’t Stand a Chance,” Anderson .Paak faithfully delivered the 2016 hit from his second album “Malibu” that reeled in the crowd. Large flames leapt into the air with the opening. Two background singers from The Free Nationals to his right spun in circles and bumped hips. He then began yelling “Yes Lawd!,” in response to his tremendous audience, whom he asked to throw up one hand in the air. His signature line naturally transitioned into “Saviers Road” from his acclaimed 2018 album “Oxnard,” while the audience’s hands moved up and down with his. .Paak’s simultaneous vocals and drumming, moonwalk-like side-sliding across the stage, and other dancing dazzled the overflowing audience, who he bantered with throughout the show. From the first moments of his performance, Anderson .Paak illustrated a powerful ability to perform.

He hit upon songs like “Make It Better,” sans background graphics, from his album “Ventura,” out only over one month ago, and “6 Summers” from “Oxnard” while returning to older songs like “Come Down” from “Malibu.” He catered to more recent listeners, but his lineup was effective and nonetheless diverse, a virtue of the variety within his latest two albums. While most of the crowd was purportedly there for .Paak, he gave many a shout-out to the Free Nationals, whose impeccable live instrumentals greatly enhanced the performance, and whose trumpetist took the limelight at certain moments, in particular during the closing of “King James.” An appearance of Lil Nas X clad in cowboy-style clothing was unexpected but welcome, as anyone would give to see him play “Old Town Road.”

Images on the background displays were often vaguely psychedelic, with rapidly changing colors and abstract graphics that borrowed from funk music styles, while at other times the displays were like an old-fashioned video game or flashed block colors. The patterns did, at times, sometimes seem excessive alongside the extravagance of other stage elements, like shooting sparks and trails of flame. A massive image of the same circular, glittering tints .Paak wore accompanied the high-energy track “Tints” well. With “King James,” a newer and perhaps lesser known song that is a salute to Lebron James and Colin Kaepernick, .Paak took advantage of the screens to print lyrics while displaying the track’s intriguing cover art: a dollar bill with a childishly drawn rainbow behind a field of flowers in lieu of George Washington’s face, and Anderson .Paak’s name scrawled underneath in a handwriting similar to Basquiat’s.

Anderson .Paak ended on a wistful note with “Dang!,” a track from the late Mac Miller’s album “The Divine Feminine” as he sang and played percussion before a less experimental, still-flashy display of horizontal blue and black stripes. His percussion added to the performance in the large swaths of song in which Anderson .Paak did not sing. The performance closed with a massive projection of Anderson .Paak and Mac Miller smiling alongside one another in a sweet tribute.

Through a mélange of the most up-and-coming of his own music, Anderson .Paak’s show at Boston Calling displayed a level of performative genius that served longtime fans and complete strangers. He merits a reputation as a show-stealing live musician, an effect compounded by the dynamic and charismatic Free Nationals.