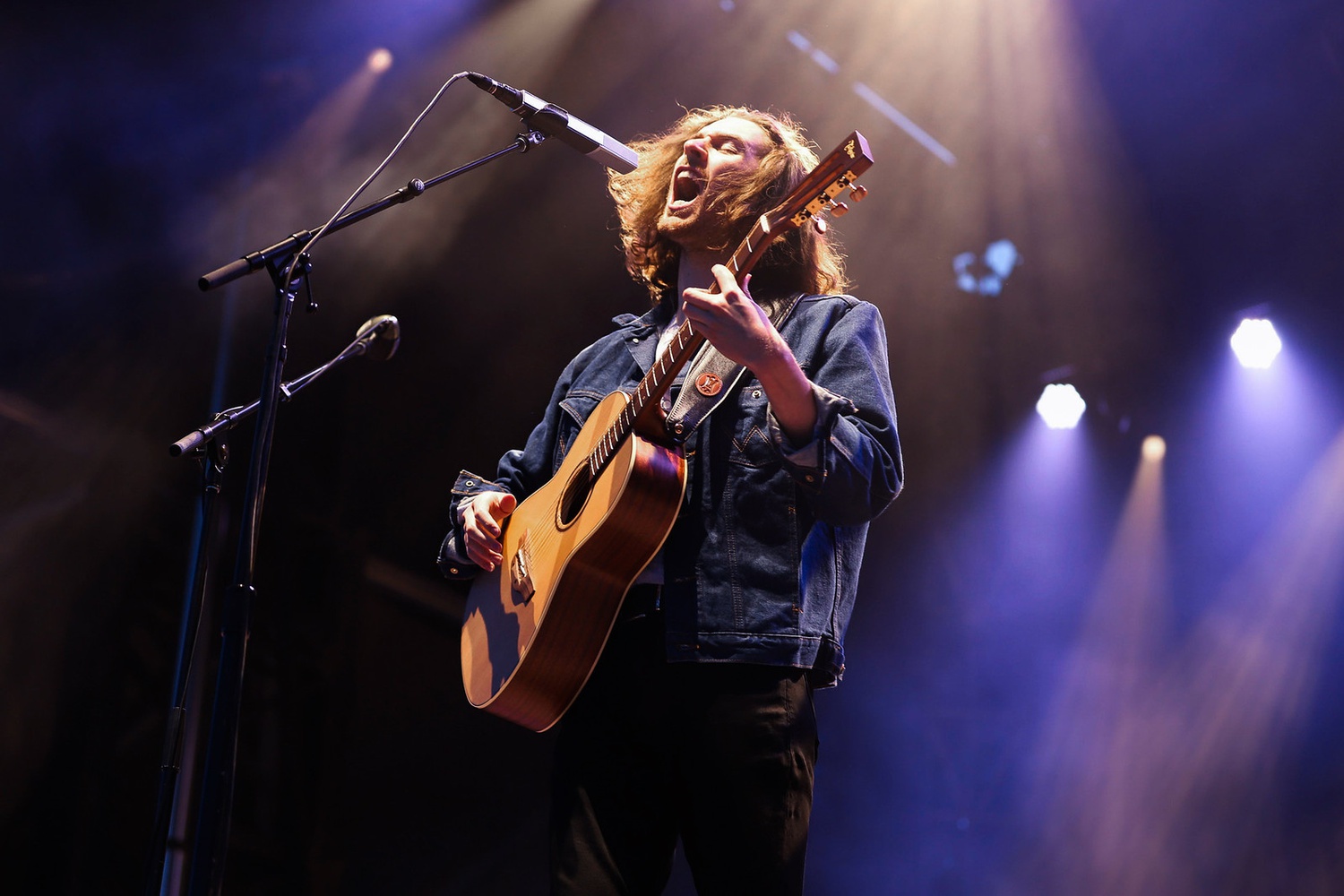 As Grammy-nominated Irish rock singer Hozier opened his Saturday evening set with a rendition of “Would That I” as the sun set on the penultimate day of Boston Calling, he set the tone for a serene performance — a serenity that would nonetheless morph into the powerful, activist contrarianism of his last piece “Take Me To Church.” Equipped with a guitar and a true and crisp live voice, as well as guitarists, a percussionist, and an organist, Hozier offered a clean performance fit for mass appeal.

During some songs, columns of saturated yellow lighting lined the back of the stage, while at other times an intriguing display included an underwater armchair or a backlit, neon, gauzy curtain-like setup. It occasionally made it difficult to see Hozier’s face without viewing it on the display, which made little sense for a singer whose raw and authentic voice drew crowds. The music style of other acts, like Saturday night headliner Tame Impala, permitted an elusive stage appearance. Violet or electric blue overhead stage lights that illuminated the smoky air nonetheless fed into a soft aesthetic that complemented the depth and roughness of Hozier’s voice. Often rendering the organist, other band members, or Hozier in sepia, the displays contributed to the folksy vibe of songs like “Almost” and “Nobody.” After Hozier progressed through almost the entire setlist, however, maintaining the same unconvincing, falsely evocative video filters or profile shots of the artist playing his guitar as he sang into the planted microphone became wearisome.

The concert amounted to everything expectable from a several-hit indie musician. No element surprised, nor did any disappoint. Familiarity with Hozier made the lights brighter and his melodies more heart-wrenching, but the concert experience would be enjoyable to any. Hozier’s live performance was only fulfilling — in fact, exhilarating — because of his musical talent. He generates profound lyrical messages and lessons, whether relatable or moving. Hozier explores questions of free love and the political acceptance of humankind boldly within his music. For example, the song “Someone New” that he performed early on broaches the reality of widespread, easy love, as opposed to the more widely-accepted long-term, straight, monogamous love that contemporary music speaks of. In the music video, the protagonist fantasizes about men and women who are strangers to her. The influence of intersecting blues, rock, and folk genres in his music culminates in a style rooted in both tradition and originality.

While Hozier sang “Take Me To Church” with a slightly augmented passion than the preceding songs, the black-and-white footage of the Russian anti-gay violence scenes of the music video streamed on the display behind him on stage. As his first theatrical use of the screen, the video of traumatic rights violations drew special audience attention. It elevated the impact of his much-awaited final song, and distinguished it from the rest of his discography. “Take Me To Church” is a cut above in heaviness and the way in which it has been recognized, while speaking to a common theme of unconventional or threatened love.

As a concert performer, Hozier was mundane, but as a musician, he outrivals — which serves as insurance and fortification to subpar concert style. With Hozier, there was no need to be innovative. While other headliners like Travis Scott achieved new heights with their concert style, Hozier’s sufficed. He contributed to Boston Calling merely for being part of the lineup, and for singing his set.