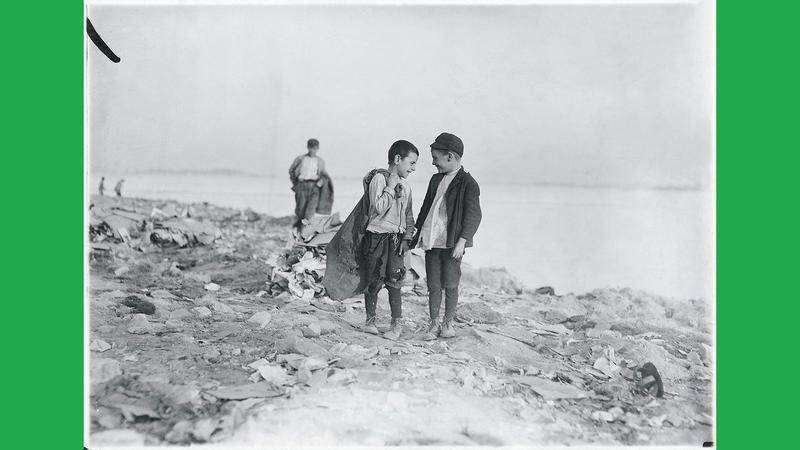 “Big Plans: Picturing Social Reform,” which runs from June 20 to September 15, is about landscape architecture as a 19th-century social innovation, one that the exhibit claims re-mapped the boundaries between the elite and working classes.

The exhibition cartographically charts the development of public parks in major cities, with Frederick L. Olmsted starring as protagonist in the story. Olmsted conceived New York’s Central Park and Boston’s Arnold Arboretum, Back Bay Fens, and Emerald Necklace park system as progressive antidotes to inequality — democratic luxuries that offered reprieve to the rich and poor alike, according to exhibition materials.

Exhibit curator and Harvard professor of landscape architecture Charles Waldheim gestured to a map of Central Park at the entrance of the exhibit, the day before it opened to the public. “Can we take drawings that are made in service of urban planning and hang them on the walls of the museum that has Rembrandts?” he asked. “Can they hold their own as works of art?”

Assistant exhibit curator Sara Zewde said that she thinks they can, given that the maps had “to be beautiful in order to galvanize people about an idea.” The maps on display feature parks and lakes rendered in jewel-tones of green and blue, their textures ranging from dense, webbed gridding at the center of cities to swirling mountain ranges at their outskirts.

But standing before another Central Park map, Waldheim said that there is “violence” that belies this beauty. He said that immigrants and freed slaves living on the land were displaced — and their homes razed — to create this public space.

In the exhibition, sprawling plans surround an inner wall of tightly-ordered, black and white photographs by child labor reformer Lewis W. Hine. Titles of his work include “Boys of the Dumps” and “Among Ash Barrels.”

“We're interested in the contrast between these large urban plan drawings here — kind of heroic, and if you build it, aspirational things. And these tiny, little, tougher, this-is-how-it-really-is kind of images,” Waldheim said.

Also on display are archival materials from the museum’s namesake, Isabella S. Gardner. One remarkable treasure is her “Birthday Book,” which guests were invited to sign if their visit happened to coincide with their date of birth. The book is opened to a page bearing Olmsted’s signature.

Like Olmsted, Gardner had a passion for social reform. Indeed, she founded her museum “for the education and enjoyment of the public forever,” according to its website.

Waldheim said that Gardner’s museum — which sits on Olmsted’s Back Bay Fens — is just as much a part of Boston’s landscape as its parks. The line between culture and landscape is misplaced at best, he added.

“I think many people could imagine the Boston parks and their parks as preserved or conserved natural elements,” Waldheim said. “They didn't know it was erasing what was there and building something artificial.”

Zewde concurred, noting that the landscape is not a thing but a “frame of the world.”

At this exhibition, landscapes both frame and are framed.

Zewde added that she considered the exhibition to be a “microcosm” of the Gardner museum's broader mandate for social reform.

This mandate manifests today in the Neighborhood Salon Luminaries program, which gathers local artists to shape the “creative, educational, social, and political landscape of Roxbury, Mission Hill, Fenway and Greater Boston,” according to the museum’s website. Current luminary and fashion designer Nathalia JMag is working this summer with local youth to treat maps as aesthetic material and transform them into textiles.

The “Map This” fashion project kicks off a little more than a month after a group of students of color was allegedly subjected to racist and humiliating treatment on a school trip to the Museum of Fine Arts. In the past few weeks, the question of who museums are for, and of whose stories they should tell, has been asked with new vigor.

“It’s very clear that museums — cultural systems broadly — need to be more relevant to the communities they serve,” Waldheim said. “And so this show is an example of our new strategic plan, where we need to be much more focused on telling stories that matter to us, and then also be available to host conversations like this about the future of the city itself — and not just about art for the sake of art.”