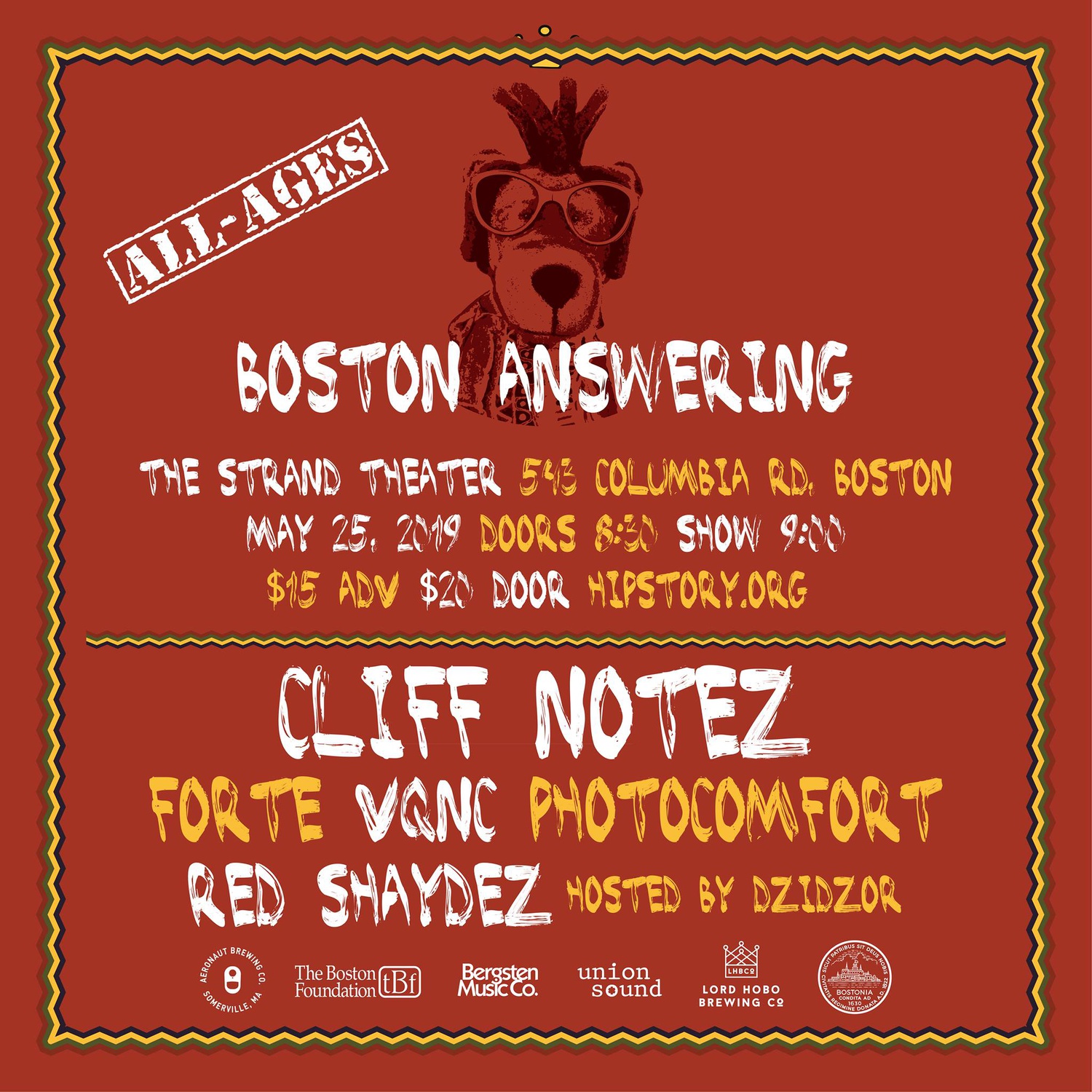 While the 2019 Boston Calling music festival promised an impressive lineup of popular acts, the hub’s musicians had something else in mind. HipStory, a Boston-based production company, put on the inaugural one-day festival Boston Answering, which it described as a “cultural response manifested into a show.” Cliff Notez, who doubled as the founder of HipStory and the concert’s headliner, said this event was a response to the fact that local hip-hop acts have been denied the famous festival’s stage.While Boston Calling‘s Saturday line-up was in full swing, five Boston-based artists took to the Strand Theater in Dorchester to showcase their artistry in music ranging from indie-pop to hip-hop.

Boston Answering countered Boston Calling not only with local artists, but a local venue as well. The concert took place in the Strand Theater, a restored vaudeville theater, with all the elegance and sophistication one would expect. It was a striking place to hold a concert — the theater encourages passive listening, with rows of seats and the kind of classy ambience that doesn’t typically rile up audience members. Yet as the seats began to fill up, the buzz of the crowd would prove that wrong.

Emcee Dzidzor took the stage to introduce each of the acts, starting with VQnC, a singer who moved to Boston in 2013 and is part of HipStory. She swayed naturally on stage as she sang genre-bending songs like “Heart” and “Freedom,” giving the instrumentalists behind her time to shine as they played solos and expressed their passions onstage. “Freedom” was particularly memorable, as VQnC’s clear and soothing voice offered words of encouragement and empowerment to the audience. Starting off slow and soft, the song picked up its tempo and flair as she gained momentum. Next on stage was Forte, a Somerville rapper and also another HipStory member. Sporting a pair of sunglasses, he took the stage without hesitation, immediately jumping to his first song as his DJ laid the beat. The rapper took advantage of the expansive stage, jumping from one end to the other as he rapped about his origins, his dreams, and his life. Yet despite his natural ability to rap and flow, the powerful beats seemed to overpower many of the lyrics.

Next in the lineup was Photocomfort, who played the keyboard and sang in an ethereal, white gown. Her songs were soft and expansive, not unlike VQnC’s, but often difficult to comprehend. Unfortunately, whether it was the acoustics of the room, the overwhelming presence of the background instrumentals, or just the style of her music, strained ears weren’t enough to piece together the words. The effort and confusion took away from the experience as a whole.

Red Shadydez more than made up for this momentary lapse in production when she entered the stage. With a knowing smile and her trademark red shades, the rapper entered the stage with full control and command. Her infectious energy got everyone on their feet, cheering and moving along to her impressive flow. She’d get the audience to sing along with her, repeating lines like “I just wanna catch a vibe,” and “Pack his bag, get his shit.” She took the theater on a rollercoaster of emotions, starting with hard-hitting beats about her status and position, then dropping to more melodic undertones as she rapped about her struggles, and finally to carefree, relatable verses about how she “can’t even function.” Her act was a breath of fresh air; while each artist brought something unique to Boston Answering, she alone rejuvenated the crowd and took the room by storm.

Not to be outdone, the final act was Cliff Notez, the headliner and the organizer of the whole event. Many of the previous performers came onstage to provide vocals and instrumentals as he sang his most popular songs “Good Riddance” and “Lights Out,” giving a narrative arc to his act. The political and social commentary imbued in his music brought the concert full circle in drawing attention to the larger purpose of holding such an event. Indeed, Boston Answering proved how much talent the city has and gave the locals an opportunity to come together and support one another. Maybe next year, Boston Calling will think twice about putting these artists on hold.

— Staff writer Vivien L. Tran can be reached at vivien.tran@thecrimson.com.