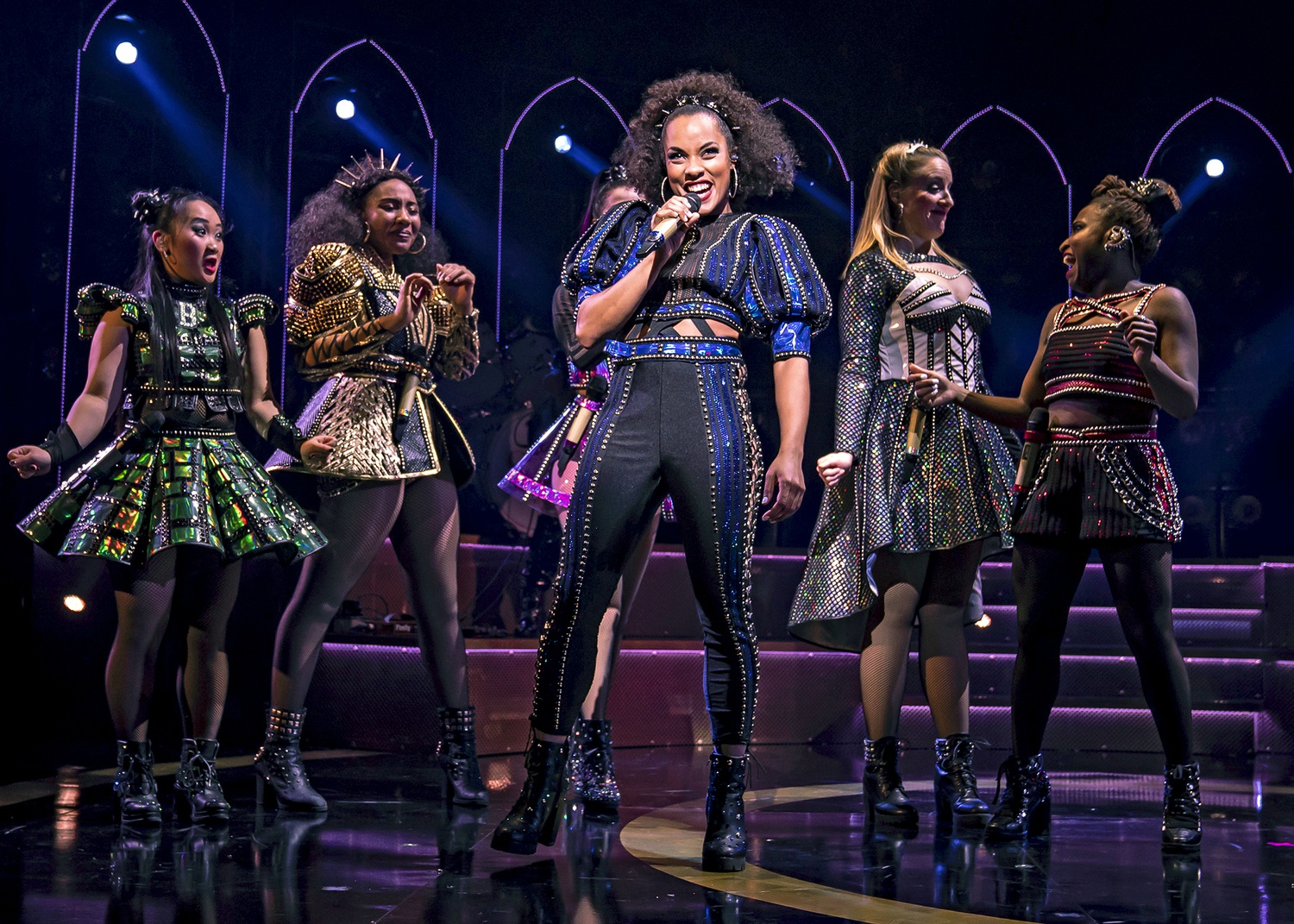 Move over, Little Mix — the infamous ex-wives of King Henry VIII have formed a girl band called “Six,” and the lyrical shade of “Shout Out to my Ex” pales in comparison to diss tracks that literally spill tea about the head of state of England. At the American Repertory Theater until Sept. 29, “Six” is a daring, unapologetically feminist musical created by Toby Marlow and Lucy Moss and styled like a pop concert. Former Tudor queens are transformed into different iconic singers, and, tired of being just another notch in Henry’s bedpost, together seek to reclaim history as noteworthy women in their own right. Queens Catherine of Aragon (Adrianna Hicks), Anne Boleyn (Andrea Macasaet), Jane Seymour (Abby Mueller), Anne of Cleves (Brittney Mack), Katherine Howard (Courtney Mack), and Catherine Parr (Anna Uzele) take turns performing sassy solo numbers that detail their individual woes concerning their marriages to King Henry. They seek to elect one among themselves to be leader of the band based only upon this criterion: Who has the worst sob story? Packed with as many radio-worthy melodies as accurate historical facts, “Six” is phenomenally fun, even if its messaging on female empowerment is at times too heavy-handed.

First and foremost, “Six” is visually captivating and makes the most of its crazy girl-band premise. The musical begins like a real concert, with a dark stage on which only silhouettes of six figures can be seen. Spotlights illuminate the women one by one as their voices join the rhythmic, spoken refrain of “Divorced, beheaded, died; divorced, beheaded, survived” that seems intentionally reminiscent of the intro to “Cell Block Tango” from “Chicago.” The costumes are ingeniously fashion-forward in mixing antiquated royal trends and modern music festival garb — for every corset and set of puffy sleeves, there’s also a pair of studded boots and a glittering miniskirt to go with it.

Beyond its aesthetic appeal, “Six” is also wildly successful in its attempt to put a modern spin on telling history. It revels in pop-culture campiness and cheeky slang, spinning narratives about Henry VIII and his ill treatment of his wives that are memorable and instantly relatable. For example, Anne Boleyn’s solo “Don’t Lose Ur Head” features a sassy comment about the king “messaging [her] like, every day,” alluding to how Henry constantly sent love letters to Anne that were met with no reply. Similarly, Anne of Cleves delivers the waspish line, “You said that I tricked you / ‘Cause I, I didn’t look like my profile picture” in the song “Get Down,” referring to the fact that Henry originally fell in love with Anne’s portrait and supposedly divorced her out of disappointment that she wasn’t as beautiful in person. Too often, productions attempting to “modernize” history run the risk of trying too hard to actively appeal to a younger audience. It’s all the more impressive, then, that “Six” not only pulls off the cool, “in-the-know” tone, but also makes it look effortless.

With its creative lyrics, “Six” cleverly delivers nuanced mood and character development with nearly every song in spite of the limitations of the repetitive pop formula. In particular, Katherine Howard’s solo “All You Wanna Do” maximizes the artistic advantages of musical theater. Acting and singing are simultaneous events that gradually subvert audience expectations of what seems like just another pop song studded with sexual innuendos. At the end of the first chorus, Katherine sings, “The only thing you wanna do is…” and trails off into an air kiss, followed by a mildly suggestive sigh. At this point in the song, Katherine is fully enjoying the abundance of sexual attention she attracts; however, by the last repeat of the chorus, Katherine is no longer posing and primping along to the choreography, and instead stands hunched into herself. She delivers her final line — “The only thing you wanna do is…” — and follows her air kiss with a choked off, gasping sob instead, and the same words take on a new tone of helplessness and diminished self-worth.

Alas, “Six” does have some weaknesses that bring down its many strengths. One issue is that this musical doesn’t seem to have a real crescendo or climax. The energy and audience engagement is at an admittedly high level from the get-go, owing to the show’s concert-like nature, and overall stays constant without much fluctuation in tone or mood. Part of the problem could be attributed to the fact that there isn’t a strong central plotline holding the story together. Each of the queens’ solos stands alone both sonically and content-wise, so the musical appears more like six autobiographies in a row rather than a narrative integrating the backstories of six characters. Creators Marlow and Moss were likely aware of this when they crafted a hurried monologue for Catherine Parr to give at the end about how women should support one another rather than viciously compete amongst themselves, in a seeming attempt to tie “Six” together with an overarching feminist moral. The retcon is unsuccessful mostly because of how removed the serious tone of the monologue is from the tongue-in-cheek attitude used to address the same ideas of female empowerment in the rest of the show. It’s a shame that a well-crafted musical with such an interesting premise and sharp, witty characters has to come to an abrupt end on an undercooked, didactic note.

If you’re into the famous YouTube series “Epic Rap Battles of History,” you’ll certainly like “Six.” The lyrics to all the musical numbers are as simultaneously eloquent and cutting as Taylor Swift’s about her exes, with the added bonus that you’ll get to watch Tudor queens dancing in perfect sync in flashy modern garb as they diss King Henry VIII. It’s a concert and history lesson in one. Although the feminist messages that “Six” attempts to deliver often lack complexity and are a bit too on-the-nose, you’re still guaranteed to have a good time if you’re just looking for upbeat music and vibrant visual performances. However, if you’re looking for ruminations on the subtleties of feminism, “Six” still has a ways to go.

—Staff writer Miranda Eng can be reached at miranda.eng@thecrimson.com.