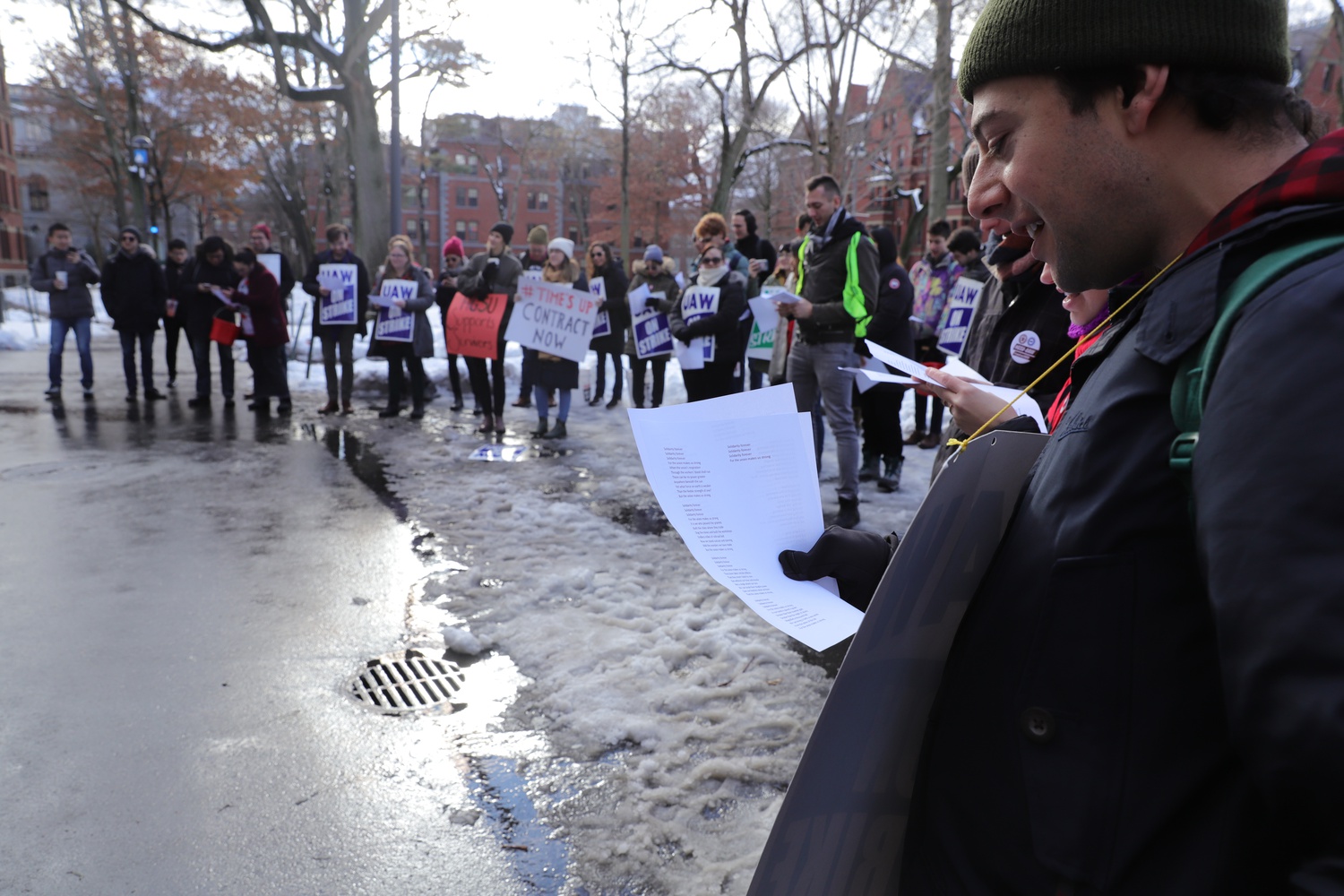 Harvard's graduate student union strike has delayed the release of final grades in some fall semester courses, according to faculty.

Much of the responsibility for grading in courses at the College falls on graduate student teaching assistants, many of whom are members of Harvard Graduate Students Union-United Automobile Workers. HGSU-UAW went on strike on the final day of classes, Dec. 3, over an impasse in contract negotiations with the University.

Striking HGSU-UAW members withheld their teaching responsibilities — including holding office hours, proctoring final exams, and grading assignments — during the strike. As a result, some professors modified the format of final exams or delayed grading them.

The strike, which later became the longest graduate student strike in recent history, concluded on Dec. 31 without a contract agreement.

The Faculty of Arts and Sciences set a Dec. 27 deadline for professors to post grades online, though FAS Registrar Michael P. Burke wrote in an email to faculty on Dec. 4 that deadlines would not be enforced as normal due to the strike.

“We understand that there may be difficulty in meeting deadlines during the HGSU strike,” Burke wrote. “We are not going to send our usual set of deadline reminders as we do not wish to add to the stress of this period.”

Burke added that faculty should prioritize submitting the grades of “high priority students,” including students who plan to graduate early from the College in March and students with “unsatisfactory grades.”

Senior Preceptor Chase H. Harrison, who taught Government 1010: “Survey Research Methods” this past semester, said he followed the procedures Burke laid out in his email.

Harrison said that in his course — which 117 students took — approximately half of grades have been finalized. Two of the course’s four teaching assistants participated in the strike and did not grade the final papers. Harrison did not ask the non-striking teaching assistants to grade the extra sets of papers.

“I don't think that would be appropriate,” he said.

Philosophy professor David C. Lamberth wrote in an email that he did not replace the labor of striking student workers for his course General Education 1069: “Faith and Authenticity: Religion, Existentialism, and the Human Condition,” which he co-taught with Courtney B. Lamberth and Cornel R. West ’74.

“We were opposed to the idea of hiring replacement workers, and we ourselves did not want to replace the work of our Teaching Fellows,” Lamberth wrote.

Not all professors, however, opposed replacing the labor of their teaching assistants on strike. Former University President Lawrence H. Summers, who co-taught General Education 1120: “The Political Economy of Globalization,” wrote in an email that he paid his non-striking teaching fellows at overtime rates to help with grading.

“Finals needed to be graded,” Summers wrote in response to a question about the motivation behind his decision to hire additional labor. He declined to disclose the rate at which they were compensated.

Some professors indicated that they expect the teaching assistants in their courses who were on strike to fulfill their grading responsibilities now that the strike has concluded.

Harrison confirmed that the two teaching assistants in his course who participated in the union’s strike will grade final papers now that the strike has ended. He wrote in an email that he anticipates grading will be complete in roughly a week.

Germanic Languages and Literatures Professor Eric Rentschler, who teaches General Education 1043: “American Dreams Made in Hollywood,” wrote in an email to his students Wednesday that he intends to submit grades by Jan. 21.

“I have reached out to the course TFs and TA this morning in the hope that the people who know your work best will be the ones both to assess it and to submit a final grade reflective of all your endeavors in the course during the fall term,” Rentschler wrote.

Though the strike disrupted grading in his course, Lamberth wrote that the strike would “absolutely not” affect his views on hiring teaching fellows for future courses.

“The graduate students who serve as teaching fellows bring remarkable expertise and skills to our classrooms, and we very much value and appreciate everything they bring to our courses,” he wrote.