HGSU-UAW rang in the new year by returning to work Tuesday night, ending nearly a month of marching on Harvard’s campus, calling administrators, and arguing at the bargaining table. At points, hundreds of students and supporters joined the picket line.
By Declan J. Knieriem and Michelle G. Kurilla 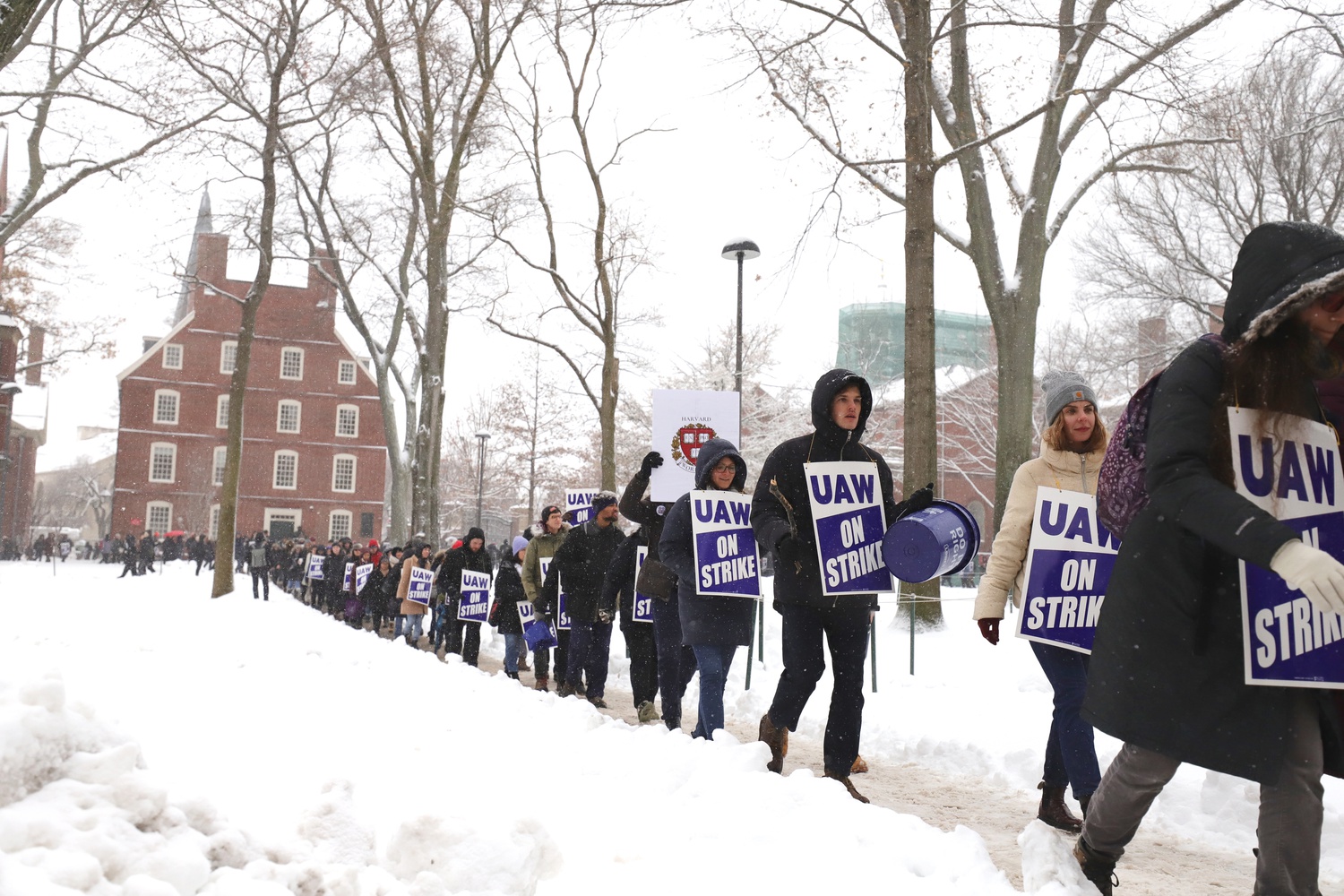 HGSU-UAW rang in the new year by returning to work Tuesday night, ending nearly a month of marching on Harvard’s campus, calling administrators, and arguing at the bargaining table. At points, hundreds of students and supporters joined the picket line.

Still, the union and University have yet to reach a contract. They remain at odds over the three provisions that prompted picketing: compensation, health care, and grievance procedures for discrimination and sexual harassment complaints.

The union first stepped toward the strike via an October authorization vote. The vote began Oct. 15, exactly one year after HGSU-UAW first met Harvard at the bargaining table. By Oct. 25, more than 90 percent of the union had voted in favor of the strike. Of the 2,682 members who cast ballots in the election, 90.4 percent voted in favor of withholding their labor, according to an email sent to HGSU-UAW members by the union’s bargaining committee.

Following the vote, HGSU-UAW announced that it would strike if negotiations were unable to reach a contract by the union’s deadline of Dec. 3.

As negotiations stalled, the union began picketing on Dec. 3, despite cold winds and snow. The demonstrators carried signs reading “UAW on Strike” and chanted “What do we want? Contract! When do we want it? Now!” Throughout the day, they transitioned between various marching routes in Harvard Yard with a strike headquarters located at the Phillips Brooks House.

The union also set up picket lines outside Harvard Yard. Student workers at the University's Longwood campus — home to the Harvard School of Public Health, Harvard Medical School, and the Harvard School of Dental Medicine — joined their Cambridge counterparts in strike activities, including hours of chanting, singing, marching, and daily rallies.

The strike also had practical consequences for Harvard affiliates. Some classes collectively walked out of their lecture halls as part of a University-wide walk out held on the first day of the strike. Other courses cancelled review sessions and office hours and delayed grading course material and final exams.

In addition to the mail deliveries, the graduate student union strike also disrupted BorrowDirect, a service that enables library borrowing across academic institutions in the United States. UPS delivers some of BorrowDirect’s mail.

During the strike’s second week, academic departments across the University emailed graduate student teaching staff to ask whether they were participating in the strike, prompting outcry from some union members.

One memo — originally sent out to Government department affiliates by Chair Jeffry A. Frieden — was posted in part by union members on Twitter. Frieden informed graduate students that they are responsible for reporting whether they are working and that those who strike should not expect to be paid. He also reminded faculty that they are “management” and were still responsible for “instructional responsibilities.” In a separate email, the Government department asked graduate students teaching fellows whether or not they were striking.

In response, the HGSU-UAW organizing committee wrote letters to department chairs expressing concern about emails asking faculty members to report graduate students’ strike status. In a letter obtained by The Crimson, they stated that administrators may use such information to “dock students’ pay” and requested that chairs “proceed with more caution” when distributing work to department members.

More than a week after the strike began, the University and union had yet to announce plans to meet at the bargaining table again. They eventually scheduled a Dec. 18 bargaining session, marking the first meeting between the groups since just before the strike began.

The HGSU-UAW bargaining committee headed to the Dec. 18 session buoyed by cheers from rank-and-file members, but left disappointed. At the conclusion of that session, Harvard and the union reached tentative agreements on six contract provisions regarding discipline and discharge, strikes, grievance and arbitration, titles and classifications, an emergency grant, and housing. But none of the new agreements related to the issues at the heart of the strike.

The next day, though, the nature of negotiations changed. On the afternoon of Dec. 19, University Provost Alan M. Garber ’76 announced that the University would suggest engaging federal mediators in an attempt to reach a contract.

“Although these proposals reflect the University’s continued good-faith commitment to these negotiations – we have reached tentative agreements on 18 articles – movement has been minimal on remaining areas of substantial disagreement between the parties,” he wrote.

“Toward that goal, we believe that the parties would now be best served by utilizing the services of a mediator to help us resolve remaining issues,” Garber added.

Union organizers soon informed members in an email they had accepted Harvard’s proposal and scheduled a bargaining session for Jan. 7. They would later cite the change as a victory substantive enough to merit returning to work.

On Dec. 30, the HGSU-UAW bargaining committee emailed members announcing they planned to end the strike the next evening. Still without a contract agreement, they urged union members to continue expressing their displeasure to administrators until the clock struck midnight on New Year's Eve.

“In order to win a fair contract, we all will need to keep organizing together,” the group wrote. “And as we head into mediation, we look forward to continuing to fight for a more just and equitable university with all of you.”