No. 16/15 Men’s Hockey Picks up Just One Point at Quinnipiac, Princeton

In a pair of ECAC matchups, the Crimson fell to Quinnipiac, 6-1, before tying Princeton, 3-3 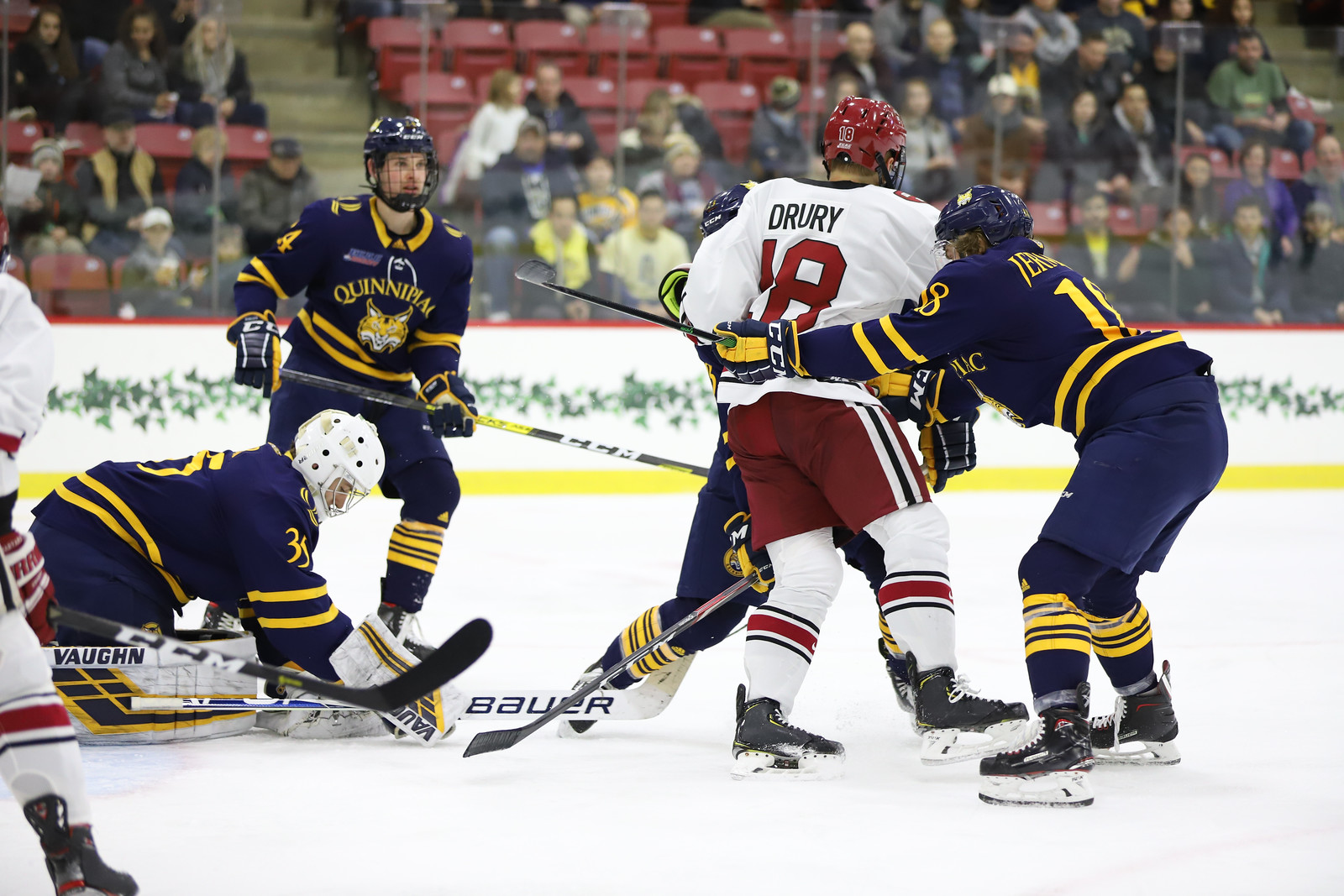 Harvard was without its top-line center on Friday at Quinnipiac. Sophomore Jack Drury was still traveling back from the Czech Republic, where he represented the United States in the World Junior Championship. By Quinn G. Perini
By Spencer R. Morris, Crimson Staff Writer

Despite carrying a four-game skid into the three-week holiday break, the Harvard men’s hockey team managed to close 2019 on a high note, picking up three of a possible four standings points in a two-game series against a ranked Arizona State squad.

The positive trend stalled this weekend, however. The No. 16/15 Crimson, eager to build a streak of winning hockey as it did in November, opened the 2020 portion of the schedule with a one-point weekend.

On Friday, the group suffered a 6-1 defeat in the barn of conference foe Quinnipiac. The following evening, Harvard (7-5-2, 6-3-1 ECAC) skated to a 3-3 draw with Princeton in the historic Hobey Baker Rink.

After spells of inconsistency derailed the Crimson’s impressive six-game unbeaten stretch to begin the campaign, the team is still battling its inability to bring a reliable brand of winning hockey to the ice each night.

“This past weekend was a little bit more difficult for us,” Harvard captain Nathan Krusko said. “A lot of the same problems arose: a lack of a complete effort for the full 60 minutes…and then our inability to have a consistent effort and energy throughout the game, really for the entire weekend. It’s good that it’s not too late in the season for us, but these are lessons that we have to learn pretty quickly here if we want to make a run at the end of the season.”

On Saturday, the Tigers (2-11-4, 0-7-3) erased an early two-score deficit and even took the lead before a third-period powerplay goal from Crimson freshman John Farinacci knotted the game at 3-3.

A clean zone entry by the man-up unit primed a one-timer from the high slot by sophomore blue-liner Jack Rathbone. Farinacci was lurking at the goal line to the right of Princeton net-minder Jeremie Forget (3 GA, .897 SV%), where he picked up the rebound and put it home.

Five minutes of bonus hockey could not determine a victor, so each team took home a point.

Farinacci’s tally six minutes into the final frame came as somewhat of a relief. Earlier in the frame, the Tigers found twine on a powerplay of their own, courtesy of junior forward Luke Keenan, and in doing so seized the lead after Harvard’s early 2-0 advantage.

The go-ahead goal was a pretty display of powerplay puck-moving. From the left point, junior defenseman Mark Paolini zipped the puck inside the slot to freshman forward Adam Robbins. The rookie fended off the Crimson penalty killers closing in around him before dishing a backhand feed to Keenan, who was waiting on the weak side to bury the one-timer.

“I thought we had a really, really good first period,” said Harvard junior defenseman Reilly Walsh. “[We] kind of took the foot off the gas and took some penalties. [We] slowed the game down and gave the momentum back…. We came out with a tie there, which isn’t the result we really look for.” 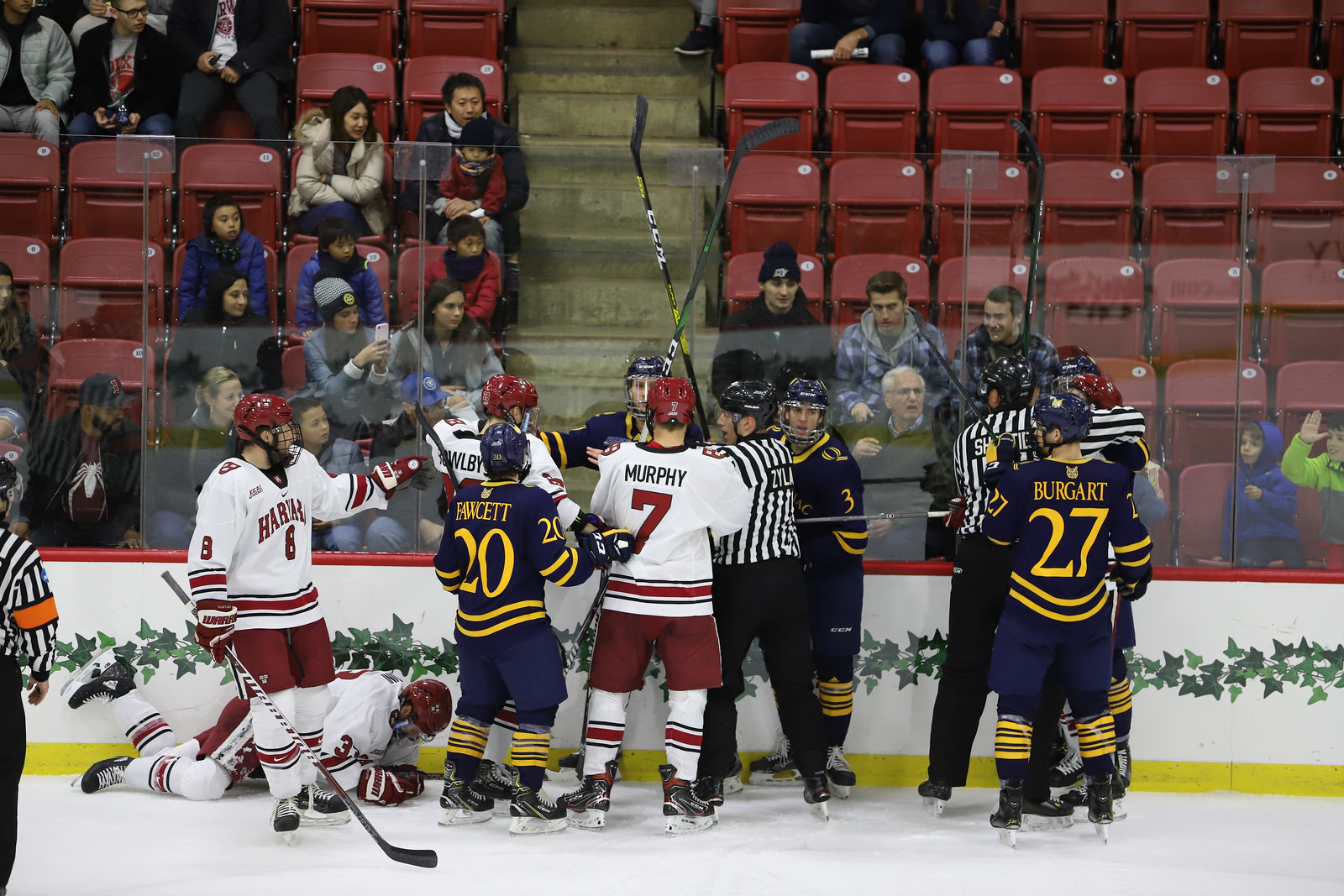 The Crimson struggled to impose a full 60-minute game on its opponents this weekend, coming up with just one point out of a possible four. By Quinn G. Perini

While the Crimson was glad to squeeze a point out of the affair, a tie against an ECAC bottom-feeder is far from satisfying for a ranked program with NCAA Tournament aspirations.

“Everyone’s aware of everyone’s record when they go into games,” Krusko said. “We didn’t play a mature game. We have to give credit to Princeton. They fought. We can’t expect to walk into game and think that, because we have some talent…or because we have a good start that teams are going to just break.”

In-game lapses have cost the squad crucial results this season — Saturday’s second period, in which Princeton potted two pucks and dominated in shots, 13-4, was no exception. Nonetheless, this weekend’s clash with the Tigers provided some positives, such as a two-goal night from the powerplay, now ranked eighth in the nation at 26.0 percent effective.

A mere 90 seconds into the contest, Quinnipiac defenseman Karlis Cukste put his team ahead with a point shot that snuck under the pads of goaltender Mitchell Gibson (3 GA, .850 SV%).

While the visitors were able to even the ledger before the first-period horn — thanks to Farinacci on the man advantage — a barrage of Bobcats goals in the following 40 minutes allowed the hosts to skate by comfortably. As part of the offensive outburst, Cutske was one of six Quinnipiac skaters to log multiple points in the triumph.

“It kind of just seemed like they wanted it more,” Walsh said. “That’s something that we have a little bit of inconsistency with — putting the pedal to the metal for all three periods…. We kind of learned how hard it is to win on the road, and teams aren’t just going to roll over because of what happened earlier in the season.”

Crimson coach Ted Donato ’91 relieved Gibson of his net-minding duties after the second period, which featured one goal and one assist apiece from Bobcats top-line forwards Odeen Tufto and Ethan de Jong.

Over the course of their careers, the two dynamic linemates have done significant damage against Harvard, with Tufto logging nine points (2–7—9) in six appearances and de Jong recording five (3–2—5) in four outings. Each player has been held scoreless just once when matched up against the Crimson.

“[Tufto and de Jong] are guys that you consistently see on the score sheet,” Krusko said. “[Those] guys like to play a really fast game. I think Tufto is pretty consistent on the draws as well…. They’re very skilled players, they’re very fast players, and they’re very dangerous.”

Tufto and de Jong also managed to sting senior goaltender Cameron Gornet (3 GA, .700 SV%), who replaced Gibson in the crease for the final frame. They contributed to two of the three tallies that Quinnipiac added in the stanza, distancing their group from Harvard.

In November, the Crimson defeated Quinnipiac handily in an early-season statement game. Friday’s result, though, muddies a comparison between the two teams and elevates the importance of the remainder of the conference schedule in deciding ECAC tournament seeding.

Harvard now turns to a marquee game on its schedule, an additional non-conference matchup with storied rival Yale at the famed Madison Square Garden in New York.