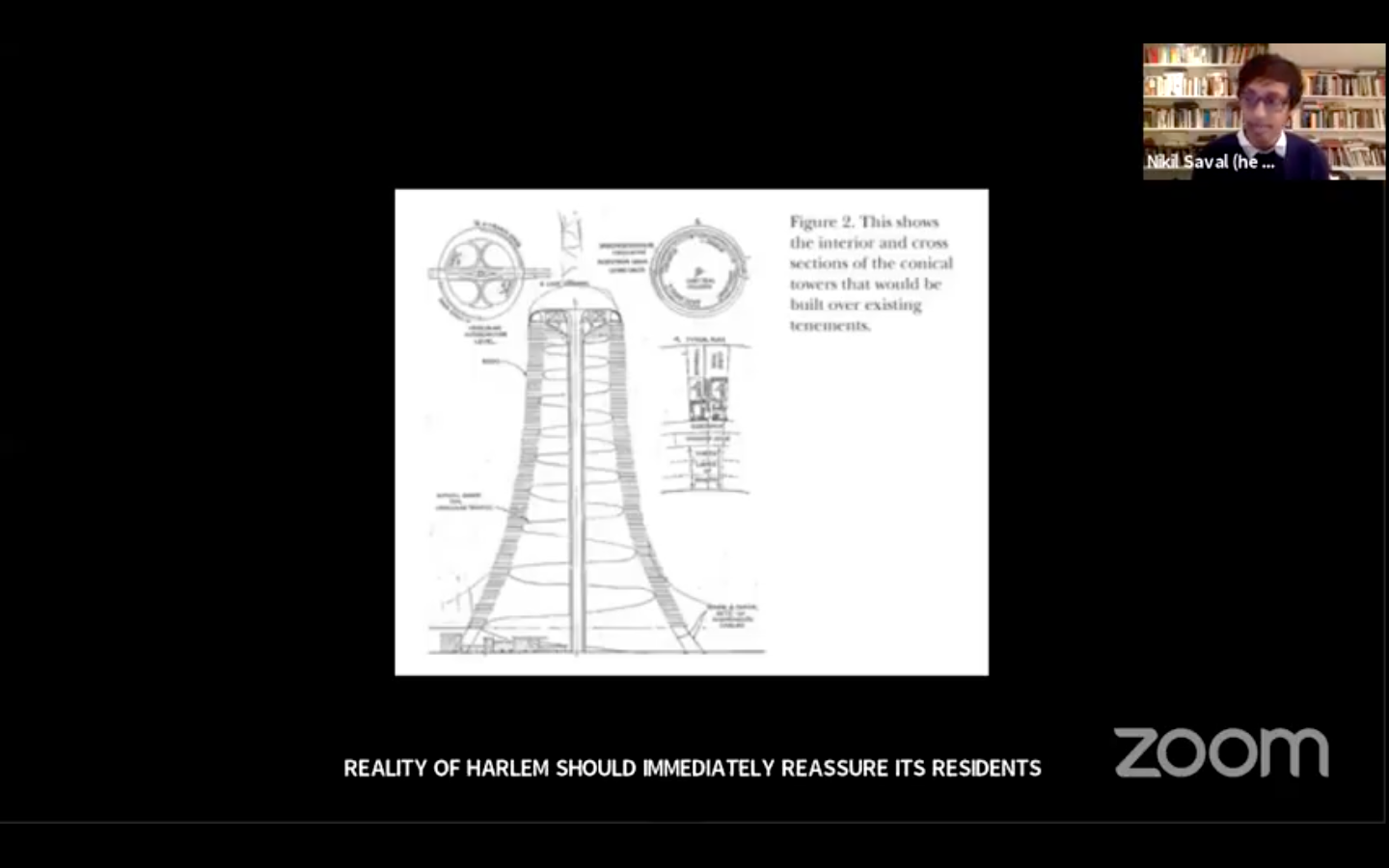 Writer and activist Nikil Saval discussed the role of architecture in reimagining cities in the context of the 1964 Harlem Race Riot at a virtual webinar hosted by the Harvard Graduate School of Design Thursday night.

Moderated by Design School Dean Sarah M. Whiting and titled “A Rage In Harlem,” the lecture was the latest installment in the school’s Open House lecture series.

Thursday’s lecture focused mainly on June Jordan, a Black feminist writer who worked with architect R. Buckminster Fuller to reimagine Harlem’s housing plan in the wake of protests over the killing of James Powell, a Black teenager shot in 1964 by a white off-duty police officer, Thomas Gilligan.

Their plan appeared in Esquire in April 1965 and featured high-rise cylindrical towers with hollow middles filled with highways and green space, with apartments contained in the towers’ walls. The towers would hold shops, supermarkets, and other community spaces for residents.

Esquire changed Jordan and Fuller’s original name for the plan, “Skyrise for Harlem,” to “Instant Slum Clearance.” The decision was one of many ways the final publication diminished Jordan’s contributions, Saval said.

“Though she was by then divorced, June Jordan was referred to by her married name, June Meyer, and any contribution she had made in the project was edited out,” Saval said. “The design was referred to as exclusively belonging to Fuller. These series of erasures of individuals, communities, neighborhoods, and titles, were both the opposite of what Jordan intended and partly of a piece with the article.”

Near the end of the lecture, Saval also discussed the murder of Walter Wallace Jr., a 27-year-old Black man, by police in West Philadelphia Monday afternoon, connecting police brutality in 1960s Harlem to current events. The location of the murder holds historical significance, according to Saval.

“This took place only a few blocks from the place where in 1985, Philadelphia Police had dropped a bomb on a Pan-African house belonging to the group MOVE, killing an entire family, burning several blocks of West Philadelphia, and leaving hundreds homeless,” Saval said.

Saval also said Wallace’s murder has personal significance for him: Saval is currently running as a Democrat for Pennsylvania State Senate in the district containing Philadelphia. He said he ran for office in part to serve as a mediator between the federal government and the state, and he has a special interest in the problem of zoning and affordable housing.

“The large-scale idea is...a lot of what we get done at a federal level can get done at the states in an easier way or in kind of a more advanced way,” Saval said. “They're the kind of vanguard, at least in some ways, of planning and ideas around housing. And so I hope to do that in Pennsylvania.”

Ultimately, Saval argued that rather than using architecture to reduce crime or perpetuate systemic inequality, policymakers and architects should focus on innovating solutions to problems like access to affordable and sustainable high-density housing.

“There are few reflections I can offer here that are adequate to this moment, except that a history which has moved away from housing toward prisons, away from utopia toward police, and away from the claiming of Black space toward gentrification displacement and expulsion is in need of exorcism, transformation, and reparations. What new forms that will take may be up to all of us,” Saval said.