Ganesh and Brennan Advocate UC Overhaul, ‘The Harvard We Deserve’ 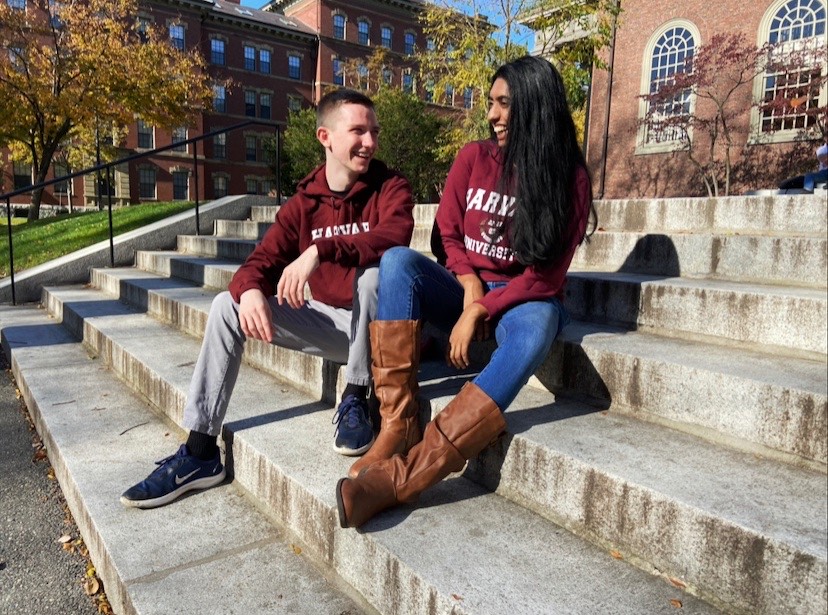 “I joined the UC as a write-in candidate my sophomore year, when people were doing the ‘Abolish the UC’ movement,” Ganesh said. “And I really, really understand it.”

“Having been on the Council, I’ve seen how sometimes the way people choose to approach problems doesn’t always effectively solve them,” she added.

Ganesh and Brennan believe their extensive experience on the Undergraduate Council — warts and all — makes them ideal candidates for UC President and Vice President.

Their campaign is centered on the premise that Harvard students “deserve more than just promises,” according to the duo’s website. The platform focuses on three pillars: social justice, academics, and pandemic plans.

Brennan said the UC can improve its efficiency by pursuing institutional overhaul instead of temporary fixes.

“I think it’s clear from the calls that we hear from students at Harvard that the big changes that we need are structural ones,” he said.

Ganesh and Brennan said that as a ticket spanning the sophomore and junior classes, they can better serve the needs of all undergraduates.

As a sophomore who missed out on some traditional first-year experiences due to COVID-19, Brennan said he is prepared to effectively represent current freshmen.

“As a sophomore and a proud member of the Class of 2023, I know what it’s like to be shuttered from Annenberg, to be kicked out of my dorm in Matthews, and to have learned my housing assignment through a screen,” Brennan said.

Ganesh said that by virtue of class standing, Brennan can relate to freshmen and sophomores in a way that she cannot, as she had the opportunity to experience hallowed Harvard traditions and build on-campus connections throughout her first two years.

“If it’s not your lived experience, then it won’t be easy to immediately tell what’s going on and what needs to be done,” Ganesh said.

Ganesh and Brennan are centering their campaign around social justice, including advocacy for a new Ethnic Studies concentration.

“I want to make that a priority because it is very important to have, especially in this age of reckoning,” she said. “In this national moment, it does not make sense for Harvard not to have Ethnic Studies as a concentration.”

Ganesh said she supported the creation of a physical space dedicated to cultural and religious groups. Students at the College have advocated for such a multicultural center for decades. She said her experience in Dharma — the Hindu students’ association at Harvard — illustrates its importance.

“Our religious space is quite literally a basement in Canaday B and it leaks in the winter,” she said. “To put minority student groups in leaking basements is just completely untenable. Physical space is kind of a metaphor for what’s important.”

Ganesh and Brennan also propose restructuring the Harvard University Police Department. They believe that it is important to establish HUPD as “one department amongst others.”

“I think that creating a Department of Campus Safety, in which HUPD is a subdepartment, would free up money and funding to go toward things like mental health and sexual assault protection,” she said.

The candidates said they were disappointed by the UC’s recent initiatives to support mental health; in the spring, the body allocated $7,200 for subscriptions to the meditation app Headspace.

“The solution is not Headspace,” Ganesh said. “Students have been telling us for several months that they aren’t using it, and even if they are using it, it’s not helping.”

Ganesh said she and Brennan would strive to allocate money to improving counseling resources on campus, both through Harvard University Health Services and peer-run support groups.

“Actual solutions to mental health include using money from the restructuring of HUPD to hire a diverse cast of counselors, so students can approach someone who understands their lived situation,” she said. “We also want to supplement peer counseling groups to address this issue.”

Brennan and Ganesh said they built their platform through conversations with members of the student body.

“Most of our platform and ideas are built up with conversations with the students that they would affect,” Brennan said. “The purpose of that is to ensure that we’re not conceiving of a problem that we think is there and are trying to solve that.”

The candidates noted that in their experience, the UC often establishes and passes new bills and ideas with immense support from the executive board; however, they say, these well-intentioned initiatives are not representative of student voices and do not address actual student concerns.

They hope to rectify this by improving transparency and prioritizing direct communication with constituents — efforts Brennan says he has spearheaded while establishing the UC Communications Committee and compiling weekly updates for the student body as UC Secretary.

Ganesh and Brennan also plan to create a UC Advocacy Caucus focused on social justice projects and driven by the priorities of their peers.

“We’ve already started doing this actually,” Ganesh said. “The Advocacy Caucus would be a group of UC members who are dedicated to reaching out to the student body and figuring out what their social justice needs are and to advocate for them.”

Ganesh said that the UC currently relies heavily on dedicated students to come forward and push the council toward fighting for their cause.

“We shouldn’t be forcing students to advocate on their own and eventually come to us,” Ganesh said. “We should be with them, on the ground, from day one, working in tandem with them to get something done.”