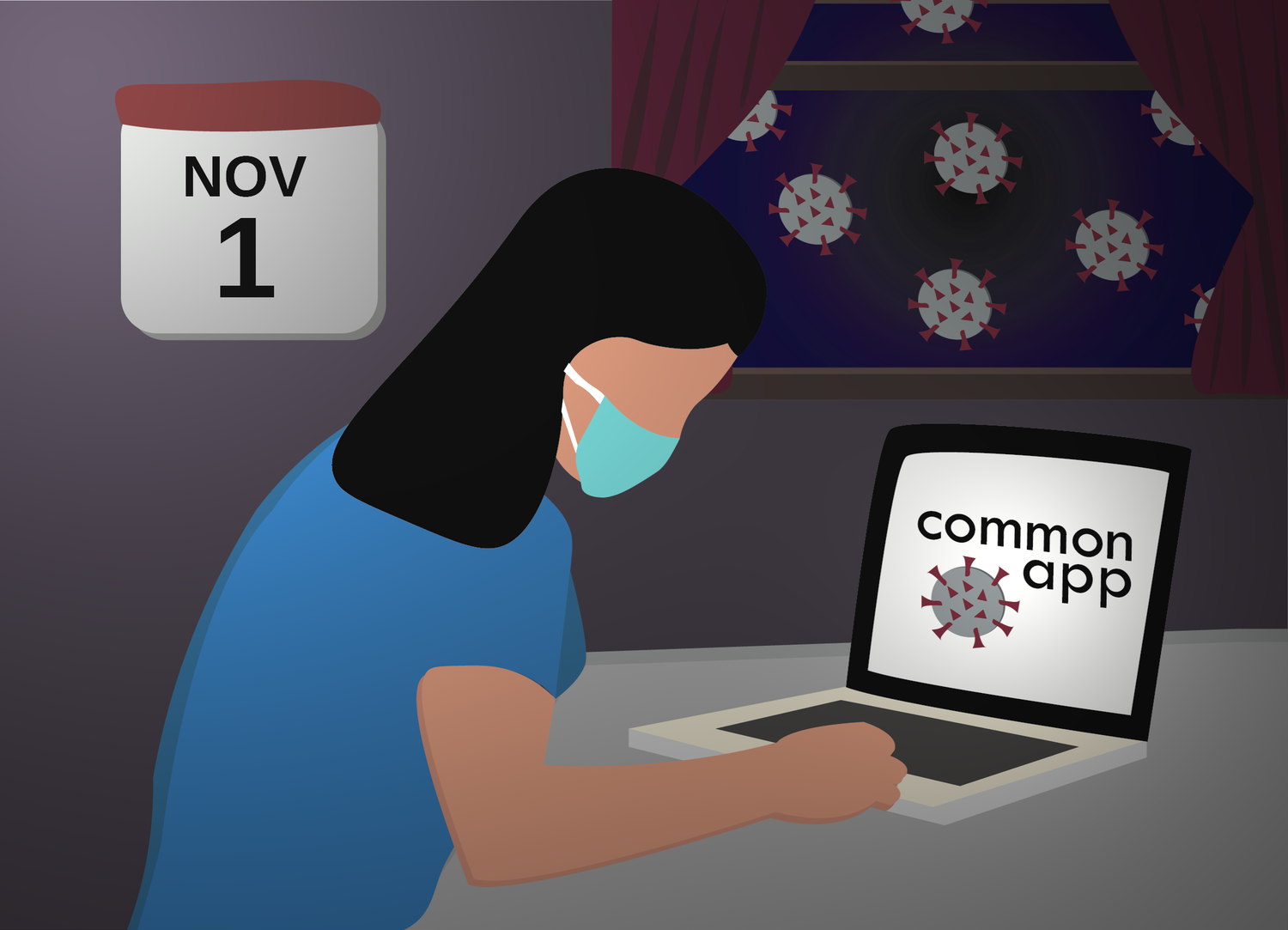 Applicants to Harvard's Class of 2025 have to reckon with an ongoing pandemic that has limited access to standardized testing, disrupted extracurriculars, and for many, severely altered their senior year of high school. By Yuen Ting Chow
By Benjamin L. Fu, Crimson Staff Writer

Applicants to Harvard’s Class of 2025 have to reckon with an ongoing pandemic that has limited access to standardized testing, disrupted extracurriculars, and for many, severely altered their senior year of high school.

Less than two weeks after the College evicted most students from on-campus housing in March, the admissions department issued guidance to then-high school juniors that they would not be penalized for failing to submit Advanced Placement and SAT subject test scores.

In light of increased testing site closures across the country and test cancellations, Harvard’s admissions office updated its guidance in June and announced that they would not require Class of 2025 applicants to submit any standardized test scores to be considered for admission. Since then, every Ivy League institution has adopted test-optional policies for this year’s admissions cycle.

With the college application season in full swing during an ongoing pandemic, high school seniors applying to the Class of 2025 still said they feel uncertain and concerned about these revised policies for the next Harvard application cycle and their admissions prospects.

The pandemic has limited high school seniors opportunities’ to explore colleges and forced others to shift their priorities when deciding on their home for the next four years. Many missed the opportunity to tour college options in-person.

“During the spring and summer and fall, typically, the tour groups are packed with families and students coming on campus to get a feel for the school. Now, there are online, remote tours and information sessions,” Muth said. “That’s a big difference.”

For some applicants, however, gauging if they would fit at Harvard came only from pre-pandemic experiences. Ricky Andrade, a Key Biscayne, Fla. native and high school senior planning to apply early action to the College, said he was fortunate to have gotten a chance to see campus for himself before application season.

“I'm lucky that my sister went, because that means I went to Harvard and I had a sense of the community, which is something that I can't say — for not only other people who are going to apply to Harvard — but for myself with other schools,” Andrade said. “There's no replacement for being there in person.”

Others like Erica S. Choe, a high school senior from Fort Lee, N.J. who anticipates applying to Harvard during the regular decision round, said the pandemic forced her to reconsider where she wants to attend.

“Distance has never been a factor until the pandemic hit. Now, I'm more cognizant of it. So, due to that, I've taken some [University of California] schools off my list,” Choe said. “California was sort of a pro for me, but now geographical location has fallen down my list of priorities and factors for when I'm considering a school.”

At the same time, Choe said she believes the pandemic’s economic impact has made her weigh factors like cost of attendance and financial aid more heavily than she previously did.

“Financial accessibility and what they can give me in terms of financial aid has risen a lot, because my family took a really hard hit due to the pandemic in terms of our family business,” she said.

‘What If It’s Not Good Enough?’

Despite colleges’ efforts at flexibility, some high school seniors say they are still stressed about their test scores and how to best showcase disrupted summer activities and extracurriculars in their applications.

With the College’s decision to become test-optional for this year’s application cycle, some applicants said they had to consider whether or not to submit their scores. Andrade said he plans to submit his test scores but felt conflicted about his choice.

“I was planning on retaking the ACT. At the end of the day, I decided that the score I had was good enough that I didn't need to take it again and so I was satisfied with it,” Andrade said. “But, I remember that I was really scared for a long time, thinking, ‘What if it's not good enough? What if I do need to take it again?’ It took months of talking it over with my counselor and my parents to decide.”

Choe said she was unhappy with the administration of Advanced Placement tests this past spring, given her lack of access to quality Wi-Fi.

“I ended up getting a score I wasn't really happy with and I don't think would have been representative of my score if we just took it in a normal setting,” Choe said.

Zak M. Harris, a former director of admission at Regis College who now works with consulting group InGenius Prep, said students and their families should not see testing as an “end-all, be-all.”

“When I was advocating for students, it never came down to, well, this kid has a 1540, and this kid has like a 1480,” Harris said of his time in admissions. “The decisions that are being made are about people, community, personality fit.”

Besides standardized testing, the pandemic has also hampered many prospective applicants’ summertime opportunities and extracurriculars.

Jessica J. Lee, a Leonia, N.J. resident who said she would apply to Harvard during the early action round, lamented the loss of her senior soccer season, which was cancelled two weeks ago. Lee also said that her summertime position at the Research Science Institute was not as fulfilling of an experience in a virtual format.

“My parents found themselves without work, so I, and my siblings, decided to go out and try to find jobs,” Kuang said. “I've been working a job since the start of this pandemic.”

Kuang also said he lost a research position at an MIT summer program that was cancelled due to the pandemic.

Many applicants to the Class of 2025 and application consultants are speculating about the pandemic’s short-term implications on college admissions.

At least 340 students representing more than 20 percent of the Class of 2024 have deferred enrollment, a significant hike from the 90 to 130 students who do so in a typical year, according to the College’s website.

Andrade said he believes the number of students who deferred enrollment to the Class of 2025 may have a negative effect on his and other applicants’ prospects of admission.

“I had thought about it a lot, but it has been far from my mind — maybe intentionally — recently,” Andrade said. “Those chances are going to be lower, like it or not. There's not much you can do. You can’t make space out of nowhere.”

After Harvard announced in July that freshmen were the only full class invited to campus for the fall, Associate Dean of Students Lauren E. Brandt ’01 said the College was “aware” of the housing strain that might result from students who will be returning from leaves of absence in future semesters.

Bay Area-based admissions test expert Jay R. Rosner said he is also worried that many high schools’ adoption of emergency, no-harm grading standards may increase pressure on those applying in the next few years.

“We now have these grade impacts on the last year. That turns out to be a pretty major impact,” Rosner said. “For the most part, we're getting less information, and it then redounds to the students to try to be a little bit more creative, to generate other projects or endeavors that they can write about and show to colleges to give them more information.”

College admissions experts said they believe that the pandemic’s impact on the application process is still unknown but will likely spur change in the long-run. The pandemic, for instance, placed a spotlight on the role of standardized testing in higher education admissions.

Harris said he thinks an increased abandonment of standardized testing by colleges is a natural result of pre-pandemic efforts to drop testing requirements.

“There are many schools out there of a high caliber that have been test-optional for a very long time, and their students are having great success and going off to do incredible things in and outside of college,” Harris said. “So I think it'll be very interesting for me to see what testing looks like in two,three, five years and if it still has the stranglehold that it has now on this entire process.”

Still, despite changes to standardized testing, Rosner said he believes other aspects of the college application could return to normal with time.

“As the impact of COVID recedes, the nature of grades and extracurriculars will come back to their pre-COVID resonance,” Rosner said. “You'll have the deeper and broader information from grades. The admissions officers will have extracurricular activities to weigh and assess.”'

In the meantime, Muth said these greater uncertainties in testing and admissions overall can overly burden those who are navigating applications on their own.

“There are just so many moving parts and unknowns right now,” Muth said. “If you don't have someone who has the time to just talk you through some of that, whether it's a counselor, a mentor, a friend, whatever, it just feels to me harder and more stressful than ever.”