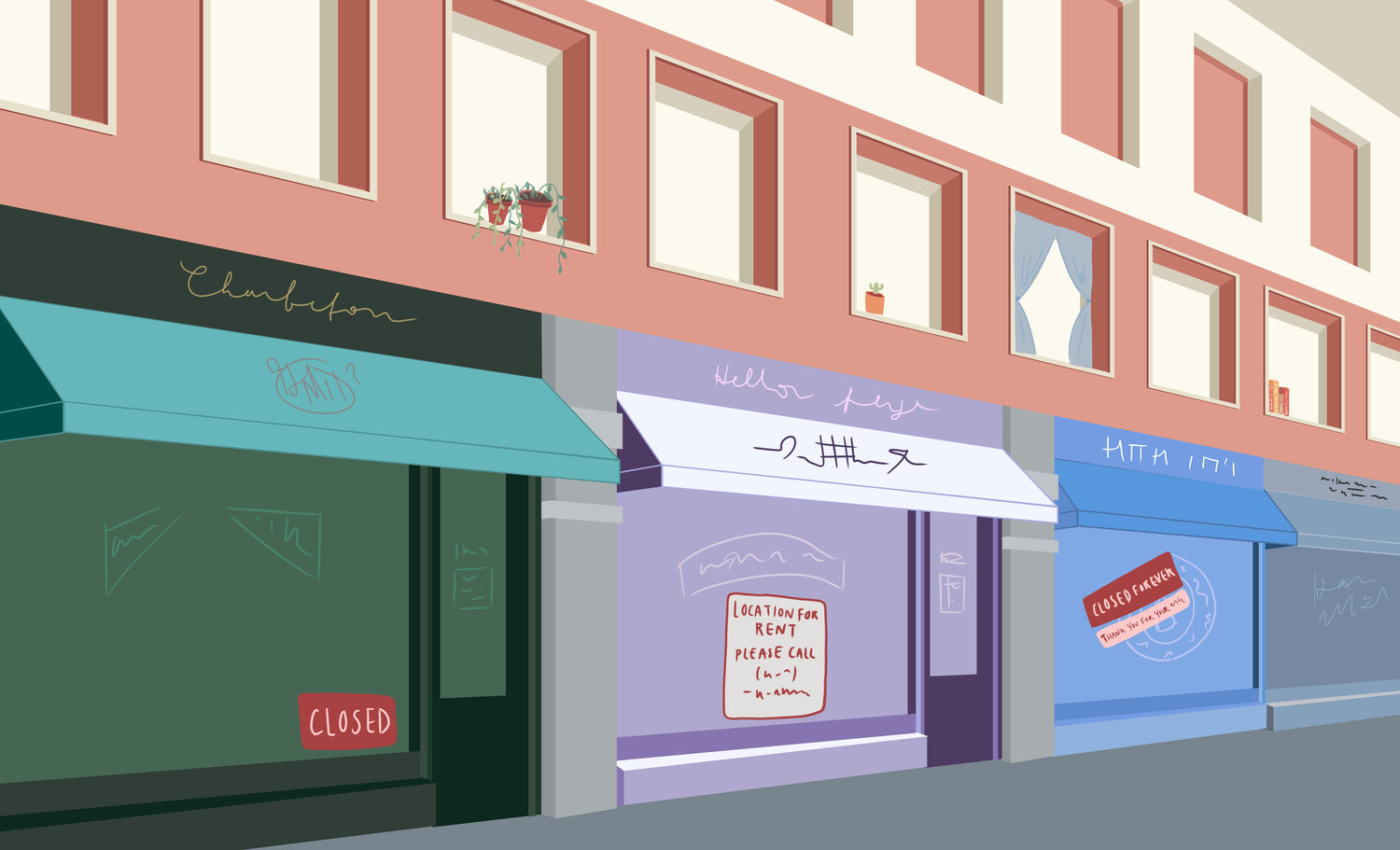 By Madison A. Shirazi
By Felicia He and Tracy Jiang, Contributing Writers

To most, March 15 – the day when many cities, including Cambridge, closed nonessential businesses in the face of the fast-growing pandemic – seems like an era away.

To business owners in Cambridge, it was the start of an arduous few months.

Many had to halt business until Cambridge’s Phase II reopening in May to June of 2020, and those that retained online sales or delivery are still struggling with a diminished consumer base.

Denise A. Jillson, executive director of the Harvard Square Business Association, said various Cambridge local businesses have permanently closed within the past few months. Others are anticipating whether they will be able to survive into the spring, with some negotiating rental costs with property owners, Jillson said.

Jillson said HSBA put together a committee to evaluate the dire situation the pandemic forced onto small businesses.

“Within a few weeks we went to work with the city on a small business advisory committee to think about what businesses were going to look like when they eventually opened up and what kind of guidelines needed to be put in place,” she said.

With businesses across the country suffering during the pandemic, those in Cambridge are especially struggling with the loss of their typical student customer base and uncertainty about when they will ever return in full force. These challenges, coupled with statewide health and safety restrictions and rising coronavirus cases, have business owners bracing for a cold, difficult winter.

Back On Their Feet

Despite a smaller number of patrons, businesses in Harvard Square are surviving after the spring shutdown by relying on takeout and outdoor operations. Some owners, however, say that these changes aren’t enough to rebound from the aftershocks of the spring.

Various business owners noted that the arrival of some Harvard students helped their business significantly.

Alex W. Meriwether, general manager of the Harvard Book Store, said that the influx of students this fall, albeit only 25 percent of the usual student body, improved business notably.

“The first six weeks of the fall was the first stretch of time that felt like somewhat of a routine, for the first time in many months,” he said. “I think that feeling was important because of the return of some students to campus.”

Philip J. Rizzuto, the owner of Lizzy’s ice cream, echoed this sentiment, saying that sales over the past two and a half months have increased from 30 to 70 percent as some College students came to campus.

“We want to thank our incredible group of loyal customers who have really stuck with us during this time,” he said. “The old saying about 80 percent of your business coming from 20 percent of your customers rings really true for us now.”

Pinocchio’s Pizza managed to bring in enough customers to keep the business going this fall, according to owner Adam DiCenso.

“Things began to pick up a little, we were able to kind of scale back a lot of the hours of our employees, we never had to let anybody go,” said DiCenso.

Because Pinocchio’s Pizza is a predominantly takeout spot, DiCenso said they were able to retain some of their business without dining restrictions and the cold weather having too much of an impact, an advantage that Hokkaido Ramen Santouka has also tried to replicate.

However, Santouka customers gravitate more towards indoor dining, with the majority still choosing to sit inside, per Takahiro Igo, the Director of Food’s Style USA, which manages Santouka.

“We have a partition between the tables,” Igo said. “For now, it’s dining in more than takeout – it’s getting more and more.”

Saloniki Greek has found success through its takeout services, but Jonathan Mendez, COO and co-founder, said his restaurant has been hit hard by the most recent restrictions requiring restaurants to stop dine-in service at 9:30 p.m.

Mendez said that moving the closing time up 30 minutes — from its normal 10 p.m. time — has slowed business for Saloniki at night.

“The biggest issue that we're fighting right now is consumer anxiety,” he said. “That half hour actually translates to two hours because customers don't want to be rushed.”

Third party delivery services provide another obstacle to regaining revenue for restaurants, with high commission fees being a subject of contention for many owners.

Angela Dela Cruz ’24, a student on campus this fall, said that she never had to rely on delivery apps until the dine-in curfew was implemented, and even now she is eating out less because of the hefty price that comes with using these services.

“It makes it difficult to order because using apps isn’t free,” Dela Cruz said. “So you have to pay for delivery and service – and that also makes me hesitant to order.”

Duncan Browne, the director of field operations and business administration of Newbury Comics, said his business has taken a dramatic hit due to the pandemic. Newbury’s business relative to the same time last year is down around 25 to 30 percent.

“The Harvard Square store has, quite frankly, been struggling,” he said. “So it doesn't feel like a vibrant, healthy, lively student and commerce Mecca the way it once did so.”

‘Doing What We Can’

Businesses owners have had to learn how to adapt to both safety and service restrictions imposed during the pandemic — some largely without much guidance from local authorities.

Santouka Ramen is attracting customers with their loyalty program, which sends out promotions and announcements about their safety measures to members. Both have initiated a substantial response from customers, according to Igo.

Similarly, the Harvard Bookstore joined the American Booksellers Association in pioneering their “Buy Early” initiative in mid-October, which garnered a huge online response, Meriwether said. Newbury Comics is gearing up for the holiday season with social media marketing and an increased stockpiling of gift items in stores.

“We are doing what we can to, you know, to encourage folks to come out and shop,” Browne said.

Rizzuto said that Lizzy’s has worked hard to expand their base to graduate students and year round residents.

“The local community in Cambridge has been fantastic in spreading the word about our business, sharing our social media page and generating interest in our product,” he wrote.

Some businesses say that they have been largely on their own during the pandemic, with little help, owners say, from Cambridge officials.

To Mendez, the past nine months demonstrated lack of communication from local government about health policy and funding.

“We always just try to follow best practices, but unfortunately, as a result of this lack of guidance or direction, we've been left on our own to try to figure things out,” he said.

Mendez said that he wished that the Cambridge city government would recognize that restaurants are a “public good.” Igo agreed and added that even though Santouka might get funding for outdoor heaters during the winter, he hopes for more help.

“I believe all the owners of the businesses want to have a direct relief program,” he said. “Just money will be the best thing, so I hope the city can consider that.”

The City of Cambridge did not respond to a request for comment.

Even without governmental direction, both Santouka and Newbury Comics instituted high degrees of new safety protocols in their stores.

“It was not mandatory, but at the beginning, in the middle of March, we just started and we bought a bunch of a mask and a bunch of gloves for [employees],” Takahiro said.

Browne noted that his team actually scored cleaning protocols from all of Newbury’s locations and adopted the most meticulous policies around employer safety that were instituted by Rhode Island.

Regardless of the fluctuating level of government involvement, small businesses owners said they are supporting each other. According to Meriwether, he included nanoseptic on his door handles after seeing the self-cleaning substance on handles at Cambridge Trust Bank.

Business owners in Harvard Square have largely agreed that it could take them over a year to get back fully on their feet.

“Timing is going to be key for us,” Rizzuto wrote. “If we can salvage a good portion of the summer, I think we can recover fully by the end of 2022 or so. If summer's a dud, then all bets are off.”

Browne, similarly, said that Newbury Comics could see revenues as they did before the pandemic by September 2022.

With businesses heavily relying on a customer base made up of Harvard students, attentive owners have been awaiting the College’s next move in hopes of the possibility of bringing back more students.

“I don’t know if this is still the case, but a few months back, I think Harvard was considering keeping an open mind to invite back the seniors and possibly some of the freshmen,” Rizzuto said.

“I wish the Square was lousy with students with nothing but money to spend, but, you know, I understand why it's not,” Browne added.

The College has not yet announced how many students will be allowed back on campus in the spring. Administrators are expected to announce their decision by early December.

Jillson said the HSBA is also taking concrete actions to preserve businesses in the area. Entering December, the organization is gearing up to encourage local holiday shopping.

“Our plan is to make the square as pretty as we possibly can,” Jillson said. “We're getting ready to decorate with holiday decorations, and we’re putting up more this year not less.”

“We are trying to promote those businesses that are here,” she added.

Browne said that the economic problems extend much further than just the individual businesses and that Harvard Square’s future as a whole is at stake.

“Harvard Square is not what it once was,” he said. “[It] used to be incredibly unique, and had dozens and dozens of retailers and restaurants that you never would see anywhere else.”

“And I think it's in the process of losing its soul,” Browne added.