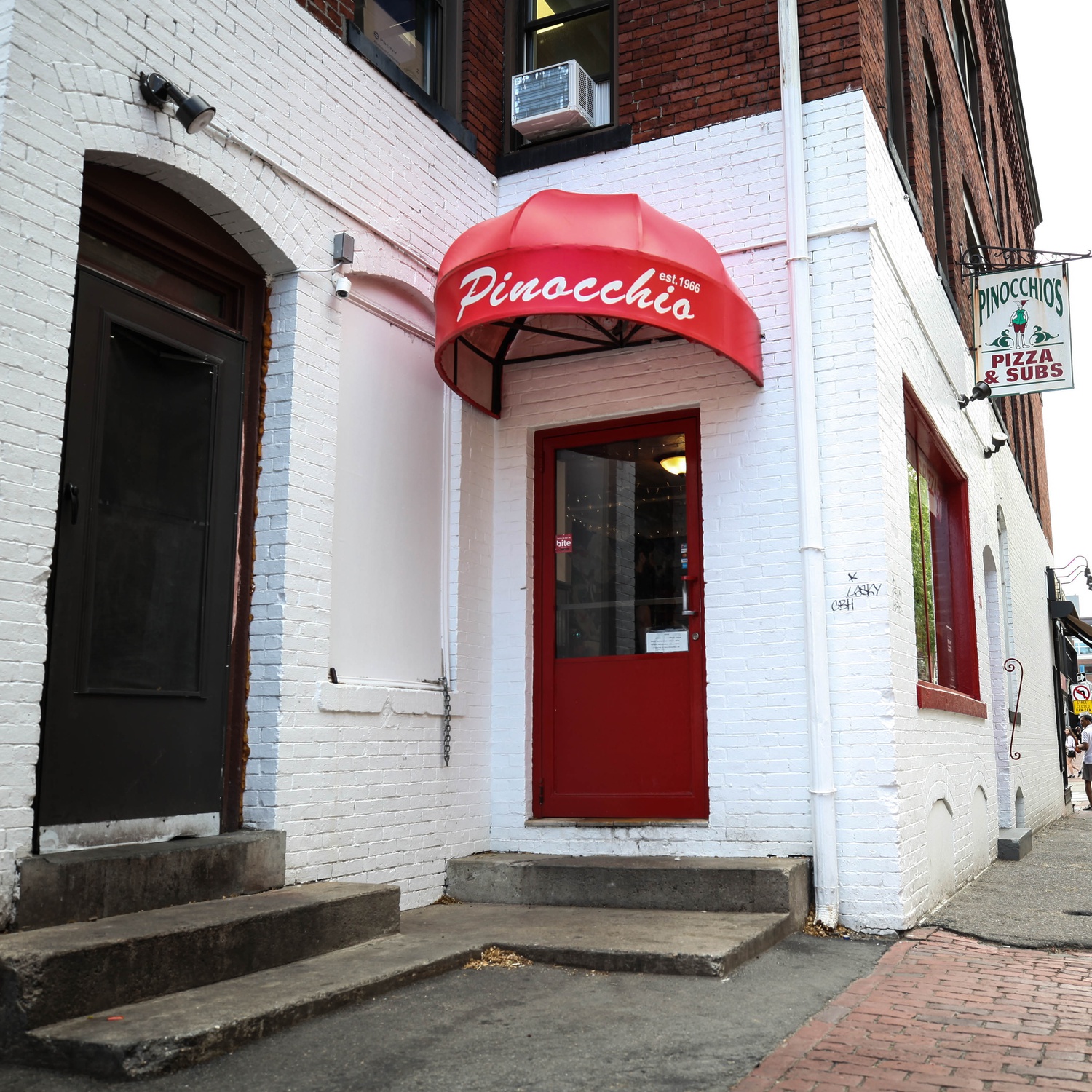 Pinocchio's Pizza and other Harvard Square businesses are missing out on a normal influx of student traffic in the fall. By Kai R. McNamee
By Taylor C. Peterman, Crimson Staff Writer

Weeks into the fall semester at Harvard, businesses in Harvard Square are grappling with a significantly smaller customer base.

The start of the school year typically marks the influx of thousands of students into Harvard Square, but this year the University is welcoming just roughly 25 percent of undergraduates back to campus.

Adam DiCenso, the owner of Pinocchio’s Pizza, said the fall typically brings a surge in customers to his restaurant.

“Years past, under sort of, quote unquote, normal circumstances, we would go from July being relatively quiet and then September, when all the undergrads would come,” he said. “We would get absolutely steamrolled with business.”

“That didn’t happen this year,” he added.

Duncan Browne, director of field operations and business administration for Newbury Comics, also said the start of the fall semester is usually a very busy time.

“Late August and September, historically, for us, has always been a good time of year from a business standpoint,” he said.

Many Harvard Square businesses have had to alter their operations to accommodate not only health and safety guidelines from the pandemic, but also a changing customer base.

“So many people would come over [for] like late-night, kind of, rewards after classes, like ‘Oh I finished my paper, I’m coming in for ice cream,’ or like, ‘We need coffee, we have another paper to write,’” she said. “We cut back our hours because that just wasn’t happening.”

Harvard administrators allowed freshmen and a select number of upperclassmen to live on campus for the fall semester. Roughly 1,600 students are living in residence this semester, per an August email from Dean of the Faculty of Arts and Sciences Claudine Gay.

Denise A. Jillson, executive director of the Harvard Square Business Association, said the students who are visiting Square businesses are frequenting a smaller number of restaurants and favoring businesses that offer affordable food and drink options.

“In terms of business, for the most part, it’s the younger student body, so they’re not in the Square at night, having dinner or a cocktail or a glass of wine,” she said. “The kinds of businesses that they tend to go to are the ones on the lower end of the scale in terms of price point.”

Alex W. Meriwether, general manager of the Harvard Book Store, said their operations have also been affected by slower business and guidelines related to the pandemic.

“At the end of August we switched over to being open on Sundays but closed on Mondays,” Meriwether said. “We have curbside pickup hours every day for those who have online orders.”

“This is still very limited from what we are used to,” he added. “It just takes a lot more staff to get the same amount of work done.”

“We aren’t gonna see the pick-up from the Head of the Charles, which is always such an exciting weekend, and usually there’s all those fairs that happen in the Square,” she said. “It’s definitely different.”

Many representatives from Harvard Square businesses said even though business is slower than usual this fall, it has still improved since the pandemic shut down stores and restaurants in March.

DiCenso said he saw that improvement at Pinocchio’s in the late summer.

“It definitely was a very long, quiet spring slash summer around here,” DiCenso said. “As the restrictions were slowly being lifted from across the state, as we got into late July and sort of in August, things actually kind of picked up a little bit.”

“It actually was a little better, but, obviously, we definitely needed and were awaiting the arrival of the students,” he added.

Traub also said Harvard Square is much livelier now than it was immediately after students were forced to vacate their dorms in March.

“It got very quiet so fast in the spring because so much of our business is students,” Traub said. “It felt post-apocalyptic in the Square because there was no one there.”

In addition to the limited number of students living on campus, several students have opted to live off-campus in the Cambridge and Boston area for the fall semester. Still, some off-campus students say they have not frequented Square businesses very often.

Ali Jebari ’22, who is renting an apartment in Somerville for the fall semester with friends, said he has not ventured into Harvard Square as much as he would have during a typical school year living in Adams House.

“I’ve been to El Jefe’s, for example,” he said. “But I don’t go there as often or I don’t spend as much money as I used to on Harvard Square businesses, for sure.”

“When it comes to where we’ve been spending our money, I think it’s mostly been local, so like in the Somerville area where we moved to, because it’s more convenient,” Jebari added.