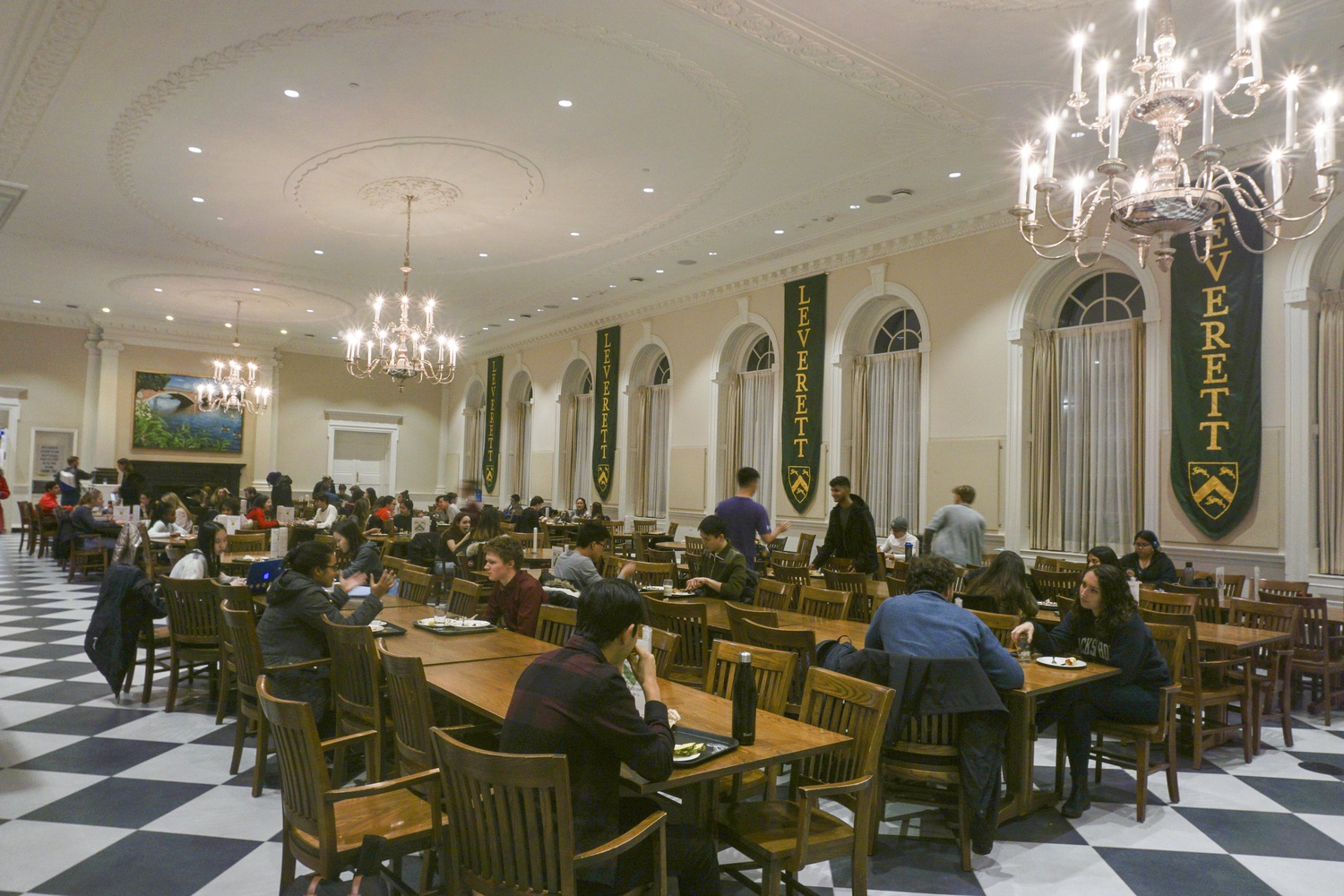 Leverett House has recently decided to close the dining hall from 2 a.m to 6 a.m. to support the dining hall staff. By MyeongSeo Kim
By Declan J. Knieriem, Crimson Staff Writer

In an email to House residents last week, Leverett students were told they could no longer pull all-nighters — at least in their dining hall.

The email — sent by Leverett Building Manager Paul J. Hegarty — informed students the dining hall would be closed between 2 a.m. and 6 a.m. in the coming months to allow the House staff more time to clean the space. Hegarty added that 24/7 access to the room would be restored during reading period.

“With so much activity in the dining hall all the time, we need to give the staff adequate time to clean the floors every night,” he wrote. “This will help with pest control and the overall cleanliness.”

In September, Leverett Faculty Deans Brian D. Farrell and Irina P. Ferreras came under fire for a slew of new restrictions on common spaces throughout the House. The new restriction, however, has not drawn the same level of outcry from students.

Leverett resident Vaughan K. Mcdonald ’20 said he understands why the restrictions are necessary. He cited an “abundance” of office hours and study groups as a reason why the dining hall staff may need more time to clean the space.

“I think some people have sort of painted it as another Leverett space closed, but I don't think I have enough information,” he said. “When other spaces have been restricted, I think it was more unilateral.”

Luke G. Minton ’20 — another Leverett resident — also said he respects the decision but is “sad” to see restrictions put in place. He described the dining hall as having an “infamous reputation” as a late-night study spot.

“The dining hall is near and dear to my heart,” he said. “I spent a lot of time in Lev d-hall, and especially in the last semester, a lot of people have been noticing that there's been an increasing pest problem. It’s something that you're going to deal with when you have things like brain break, and situations where you have a lot of people studying late at night.”

Minton also said he hopes College administrators understand that dining halls serve as an ideal workspace for students staying up late to study.

“To be realistic, the administrators at Harvard — including the faculty deans in all the various Houses — need to understand that Harvard students are going to be staying up really late at night,” he said. “I guess it's just the question of what are the most efficient places to do that, and if you're living in upperclassman House it’s really helpful if you have a place to study that's close by to where you are and allows the sort of collaboration that a dining hall does.”