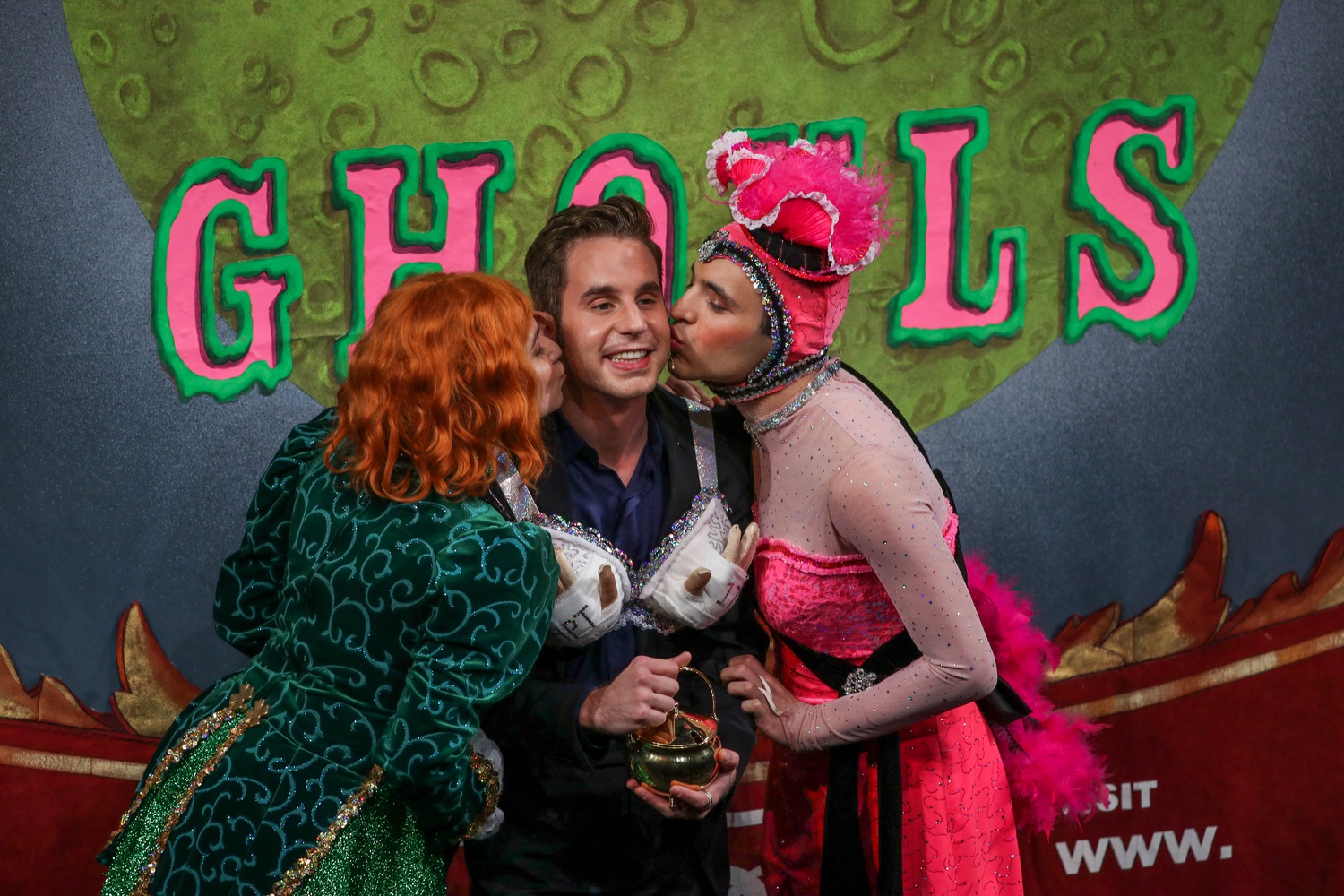 Actor Ben Platt accepts his HPT Man of the Year Award, along with a kiss on the cheek, Feb. 7. By Allison G. Lee
By Sofia Andrade, Crimson Staff Writer

“I would say that it's hard for me to feel any kind of real connection with the city until I meet the theater people within that city. And so now I've met those people and I feel much more connected to them,” said Broadway star and Hasty Pudding honoree Ben Platt at the Hasty Pudding’s annual Man of the Year celebration.

On Feb. 7, Platt was celebrated with a roast led by Hasty Pudding producers Natalie F. Needle ’21 and Samantha J. Meade ’21. The roast was followed by the premiere of the Hasty Pudding’s 2020 musical production, “Mean Ghouls.”

During the roast, Platt was subjected to quips about his age and his affinity for playing “anxious weirdos” in everything from television to film to the great white way. He was also challenged to a sing-off in defense of his honor with a rendition of Nina Simone’s “Feeling Good,” then acted out the ending to the fifth book from the Harry Potter series, after he revealed that he had stolen the book from another Ben at summer camp.

He was also asked to channel his character on Netflix’s “The Politician” while defending the status of hot dogs.

“I think we should be leaning towards connection and togetherness… Therefore, a hot dog is a sandwich,” he said, before ending his speech with a cry of “Anyone but Trump 2020!”

Once he completed the various tasks required of him, Platt received his honorary Pudding Pot.

“I’m very honored to be on this list of men and women… and I’m going to put beautiful candies in here, thank you,” he said, donning a sparkly bra offered up by Pudding cast members.

At a subsequent press conference, Platt spoke of the importance of forming deep connections with his cast members and of his love for theater.

“I think I really value the opportunity to keep pushing back and forth [between theater, film, music, and television] because it allows me to appreciate the things about the other mediums that I'm missing or that I'm not really getting involved in. But I think theatre will always be my home and what I'm most passionate about,” Platt said. “That's always where I feel the most comfortable, the most myself.”

When asked about how his Jewish heritage affected the way he approached his work, Platt cited the ways in which he connects with his coworkers.

“I would just say my inclination to turn every sort of cast into a family comes from my Jewish upbringing. I think because I was encouraged to share my feelings and thoughts and to open myself up to people I love,” he said. “Now I go into every experience looking to make that kind of a bond with everybody, whether that's a piece of theater or my cast on ‘The Politician’ or a film cast.”

Platt ended the conference with a reflection on his time in the limelight and the importance of a good relationship with his family.

“I think it’s very easy for you to kind of lose yourself,” he said. “I'm really fortunate in that I have a really wonderful family that keeps me very close to the ground. I have a lot of nephews and siblings and parents who are very supportive and want to share these moments with me. I could really care less about any of this. At the end of the day, I just want to be around the table with them.”

—Staff Writer Sofia Andrade can be reached at sofia.andrade@thecrimson.com.