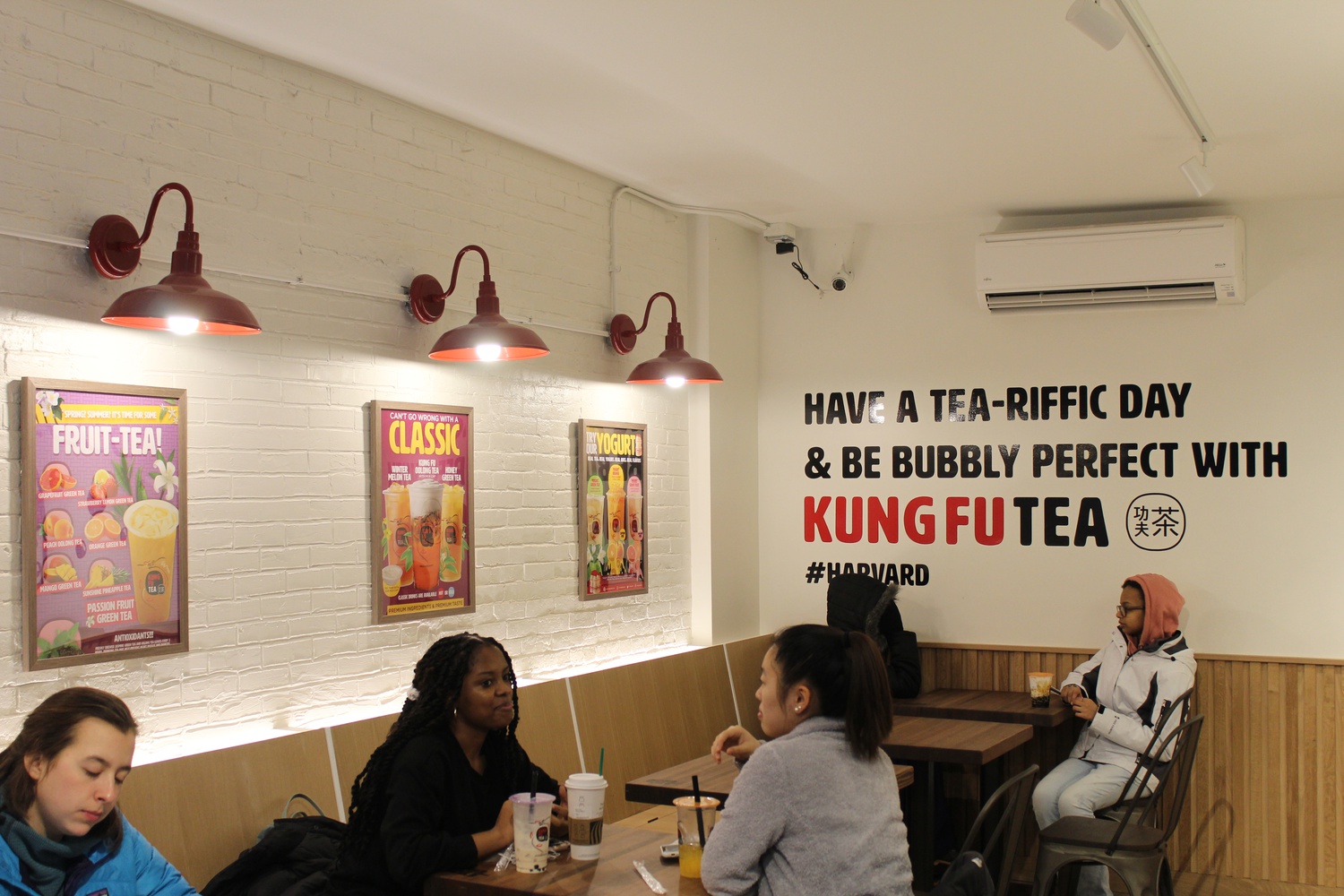 Harvard Square is known for its diversity of dining options — we have Korean fried chicken at BonChon, vegan heaven at Veggie Grill, and late-night burritos at El Jefe’s, to name a few. But Harvard Square has historically lacked the one place college-student-foodies gravitate towards: a boba spot. Boston Tea Spot and Dado Tea have tried to fill this demand, but all eyes are on Kung Fu Tea, the area's newest contestant.

The Harvard Square Kung Fu Tea (KFT) opened its doors at 1160 Massachusetts Avenue during January, kicking off with drink deals up to 50 percent off. The original franchise began in 2010 in Queens, New York, and has since expanded locations to Australia, Cambodia, Canada, Taiwan, and Japan. KFT is now a staple in the NYC boba tea scene, and its arrival in Harvard Square has generated plenty of excitement.

To investigate all the hype, I went to try it out. The KFT menu offers lots of variety, dividing their products into Classic, Milk Tea, Punch, Milk Cap, Yogurt, Slush, Milk Strike, Espresso, and Seasonal drinks. KFT also gives customers the option to adjust sugar and ice levels, add toppings such as bubbles or red bean, and substitute milk options. This range can be daunting and incredibly overwhelming to strangers to the boba scene.

After sampling the chain’s baseline drinks, the Kung Fu Milk Tea and and the Winter Melon Green Tea, a few things become apparent. First, the unadjusted, incredibly sweet taste immediately induces a mild sugar high, but can be easily altered to fit one’s preferences. Second, the actual boba (or bubbles, if you’re an East Coaster) is small and mediocre, only making the drink sweeter and not on par with the quality of the tea. Third, all the extra flavorings and toppings easily overpower the quality of the tea itself. KFT may pride itself on its use of real tea leaves and fresh brewing practices, but in most of their drinks — particularly the speciality drinks like Slushes and Milk Caps — the emphasis moves away from the tea and onto the gimmicks.

While the vast amount of flavors, forms, and toppings means there’s something for everybody, the KFT menu looks too much like the constantly expanding Starbucks menu, only with the option to add boba. To their credit, KFT’s inclusion of distinctly Asian-influenced flavors like Longan Jujube, Sesame Matcha, and Taro sets them apart from Starbucks and harkens back to their original mission of emulating Taiwanese boba shops. However, drinks like the Italian Mocha Slush and Pumpkin Oolong Milk Tea play more into social media foodie trends rather than authentic, well-made boba tea.

These untraditional drinks aren’t disgusting, but they are wholly unnecessary for the menu and attract more hype and publicity than actual customers. This trend, however, is not isolated to the KFT boba-giant, but rather a larger practice spreading throughout boba chains. Gong Cha, which started in Taiwan but now spans fifteen countries, similarly offers untraditional menu items like Caramel Chocolate Slush and Hibiscus Green Tea. Looking at their menus, both Gong Cha and KFT offer delicious, high quality tea and house-made boba, but they also include drink options and flavors that seem to negate their emphasis on traditional tea and authenticity.

This move away from traditional Taiwanese flavors is perhaps more indicative of the growing popularity of boba in the U.S. than a distracted focus of these boba chains. While these speciality flavors are far from “authentic boba,” they appeal to American tastes. For long-time boba drinkers, it may be hard to accept these new additions to classic menus as anything more than pandering and publicity stunts — but the nonstop growth of the boba industry in the U.S. promises to only bring about more options and varieties for this childhood favorite.

Despite opposition to its ever-expanding menu, KFT serves as a new landmark of Asian-American culture in Harvard Square. Its role as a boba-only shop, as opposed to Dado Tea’s food and tea menu, provides a place for students to enjoy refreshing drinks, gather and socialize, and try new trends.

KFT won’t be the last boba chain to stir up hype in Harvard Square: Eater Boston reports that Tiger Sugar, a popular international Taiwanese boba chain, plans to move into the area. Tiger Sugar’s menu brings a whole new variety of drinks and questions of authenticity to the table, and it is sure to bring even more longtime boba lovers and boba newcomers to Harvard Square.

— Staff writer Hannah T. Chew can be reached at hannah.chew@thecrimson.com.