Massachusetts Votes on Super Tuesday. Here's What You Need to Know. 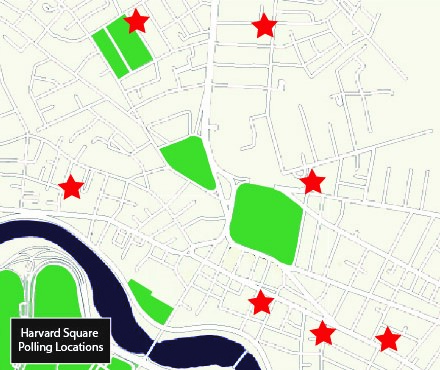 After more than a year of listening to punditry about early states, Massachusetts voters on and off campus will formally weigh in on the 2020 presidential campaign Tuesday.

Voters in 14 states will head to the polls to dole out 33 percent of the delegates to the Democratic National Convention Tuesday. In Massachusetts, which will award 91 pledged delegates, polls will be open from 7 a.m. to 8 p.m. Cambridge boasts 34 polling locations, including one at Harvard’s Quincy House.

When they step into the ballot box, Democratic voters will choose among six major candidates still in the race.

Former South Bend, Ind., Mayor Peter P. M. Buttigieg ’04 announced he would drop out of the Democratic race ahead of Super Tuesday. Nevertheless, Buttigieg’s name — alongside the names of other Democrats who have dropped out of the race — will appear on the ballot Tuesday.

Harvard affiliates were out in force over the weekend campaigning for their candidate of choice. Senator Edward J. Markey (D-Mass.) held a canvass kick-off event in Harvard Square Saturday, and several other groups also rapped on doors in hopes of boosting turnout.

The Crimson examined what experts and Harvard affiliates say Tuesday means for each Democratic hopeful, both in Massachusetts and across the country.

No candidate has more on the line in the Bay State primary than Senator and former Harvard Law School professor Elizabeth Warren.

Despite briefly leading in national polls, Warren struggled in the first four states that weighed in on the race. Warren has finished above 15 percent — the threshold required to receive a delegate to the DNC — just once, in Iowa.

Polls suggest Warren could be in jeopardy of losing her home state. U.S. Senator Bernie Sanders (I-Vt.), who came within two points of defeating Hillary Clinton in the 2016 Massachusetts presidential primary, is leading Warren on her home turf, according to the RealClearPolitics state polling average.

“It is jarring that an incumbent senator might in fact lose her home state’s primary,” Stonehill College Political Science Professor Peter N. Ubertaccio said. “But the seeds for that were sown four years ago.”

Warren recently also picked up the endorsement of a high-profile Harvard student: Jaclyn L. Corin ’23, a survivor of the 2018 mass shooting at Marjory Stoneman Douglas High School in Parkland, Fla., who went on to co-found the gun-violence prevention group March for Our Lives.

Corin, who canvassed for Warren over the weekend with other Harvard students, said she is confident in where the campaign stands.

“Going around Cambridge and talking to voters, I felt so much excitement around Elizabeth specifically,” she said. “I know that Cambridge is really loving Warren right now and I’m hoping that Massachusetts swings that way.”

After finishing in first place in three out of four of the state primaries that have taken place so far, including a dominant finish with almost 47 percent of the vote in Nevada, U.S. Sen. Bernie Sanders (I-Vt.) is entering Super Tuesday as a clear front-runner.

He announced Sunday morning that he had raised $46.5 million in February — far more than any other 2020 candidate in any given month.

Sanders held a rally in Boston that was attended by more than 13,000 people on Saturday.

Xavier R. Morales ’23 said he believes Tuesday’s primaries — including the Massachusetts contest — will buoy Sanders’s chance of winning the nomination.

“I don’t necessarily agree with everything he wants and how he wants it,” Morales said. “But I think he’s the best fit.”

But after a 29-point win in the South Carolina primary on Saturday, Biden supporters on campus hope his campaign is on a rebound.

“A lot of the pundits tried to count us out, but the campaign is still alive and it seems like we’re poised to be a strong contender for the nomination,” Harvard College Democrats for Biden co-founder Diego A. Garcia ’20 said.

Biden is not scheduled to campaign in Massachusetts ahead of Super Tuesday, but several high-profile surrogates who support him will do so, including former Secretary of State John F. Kerry and U.S. Representative Seth W. Moulton ’01 (D-Mass.).

Garcia, who has canvassed for Biden around the country, said he hopes that Buttigieg’s decision to drop out of the race will help Biden.

“I hope that some of his supporters both across the country and on campus will consider the Biden campaign,” Garcia said.

As early-state primaries rolled on, former New York City Mayor Michael R. Bloomberg has loomed over the race as an unknown.

Bloomberg, whose net-worth is estimated to be around $55 billion, has been spending big in Super Tuesday states, including Massachusetts. Bloomberg has 60 staffers and six field offices open in the Bay State.

Ubertaccio said he is skeptical of Bloomberg’s ability to succeed in Massachusetts, despite his spending.

“I don’t make much of people who pour hundreds of millions of dollars into a race and think that that’s somehow going to translate into support on the ground,” Ubertaccio said.

Bloomberg has surged in national polling quickly since entering the race last November, but he lags well behind Sanders and Warren in Massachusetts polls.

For U.S. Senator Amy Klobuchar (D-Minn.), Super Tuesday will likely be her last shot at reviving a campaign that has endured disappointing results in all of the primaries thus far.

“My only hope is that some of the support can go Klobuchar’s way,” he said. “She should try to remain viable in case there’s a brokered convention and people are looking for a candidate at that time that maybe isn’t quite as controversial. I can see her being that if she can make it there.”