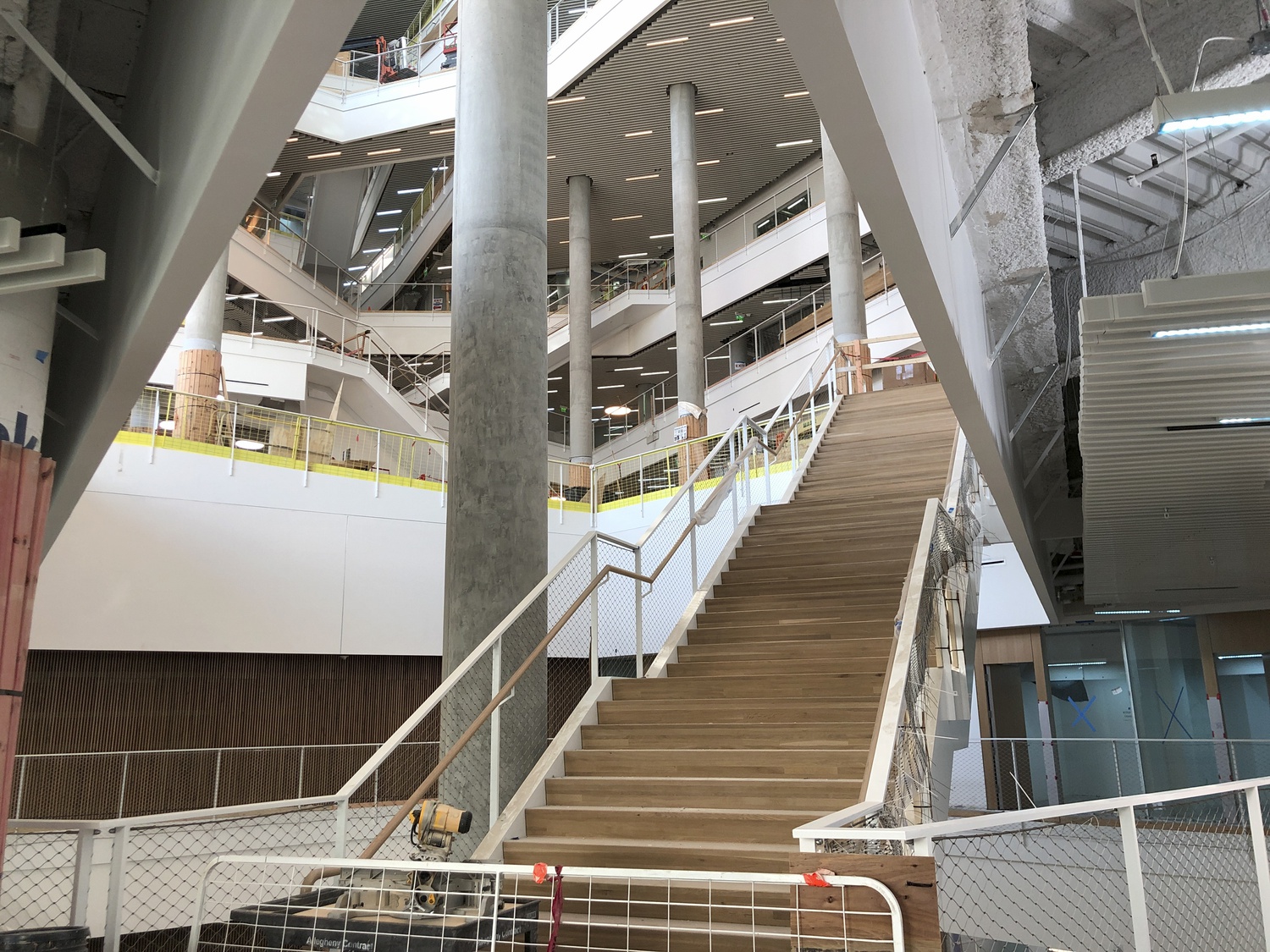 An inside look at the new SEAS campus across the river in Allston, which is currently under construction. By Elizabeth X. Guo
By Brie K. Buchanan and Elizabeth X. Guo, Crimson Staff Writers

The School of Engineering and Applied Sciences’s nearly-complete, newly minted Science and Engineering complex in Allston will feature state-of-the-art student club spaces, sustainably designed labs, and a number of amenities, one of the project’s architects told The Crimson on a first-look tour of the complex Wednesday.

The tour offered a peek into construction progress on the building, which is slated to open in Fall 2020. Leaders of SEAS student organizations including Women in Computer Science and MakeHarvard also participated in the closed tour.

Other features of the new complex include a flight lab, maker space, library, food servery, and an eight-story atrium, according to architect Michael Noll, who led the tour.

It will also play host to a wide variety of teaching spaces, from a 300-person lecture hall to a smaller classroom featuring a wall of 21 video monitors.

Throughout the tour, Noll emphasized the complex’s environmental sustainability. Classrooms will feature reclaimed wood floors, and all building materials used were vetted for hazardous chemicals in collaboration with the University’s Office for Sustainability. 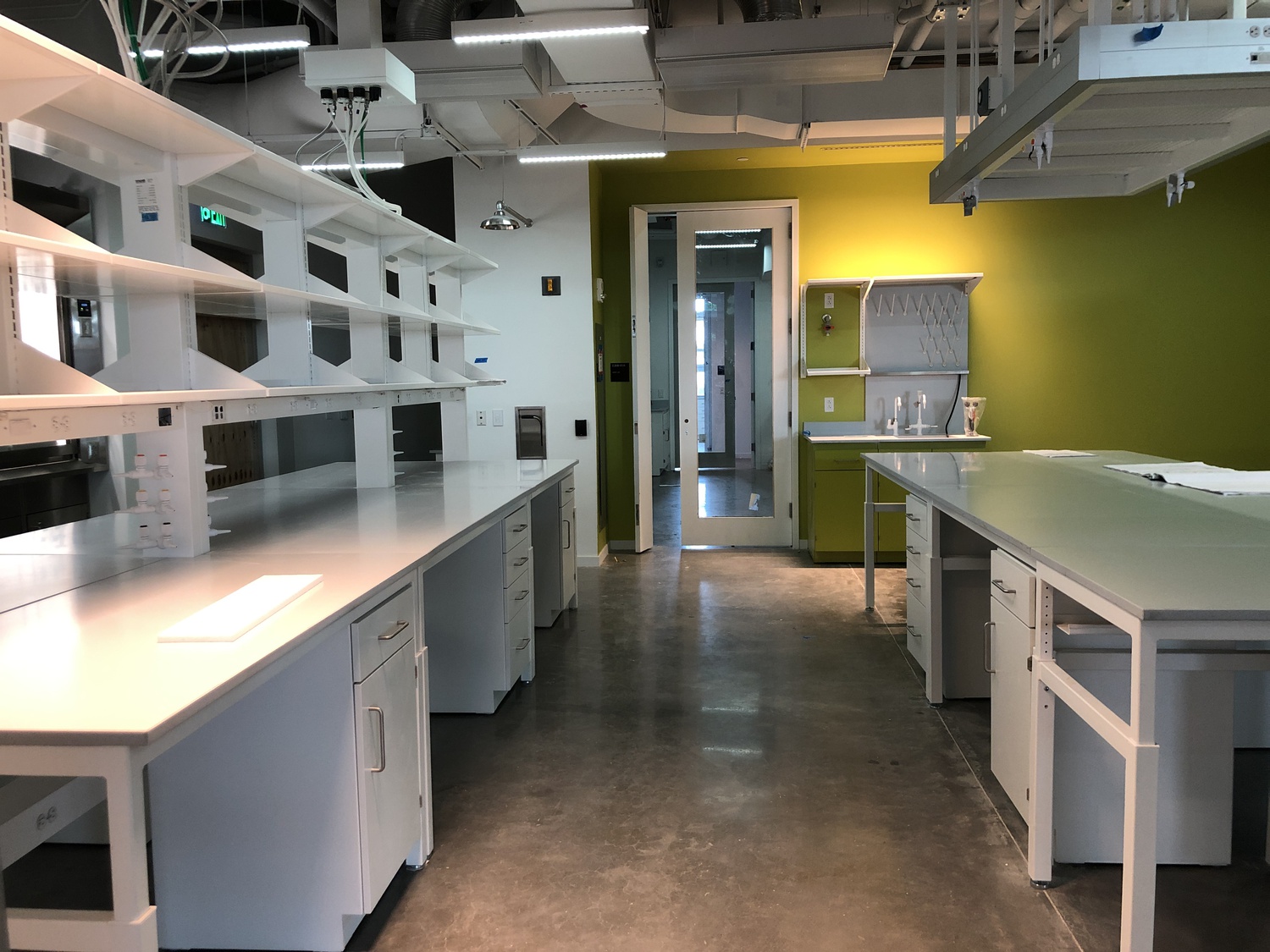 A wet lab in the new School of Engineering and Applied Sciences complex in Allston. By Elizabeth X. Guo

Faculty, administrative offices, and labs will likely transition into the complex in June, Christina Zaldana, the manager for advising programs and diversity outreach at SEAS, said in an information session before the tour. Student groups and researchers may have the opportunity to begin utilizing the space as early as this summer, and open houses and orientations for undergraduate and graduate students will take place in August.

Addressing concerns about the distance between the new complex and other Faculty of Arts and Sciences buildings, Zaldana said that students already travel comparable distances for academics, citing undergraduate researchers’ trek to Harvard Medical School from Cambridge as an example. The complex sits around 1.7 miles away from the Radcliffe Quadrangle and one mile away from Harvard Yard.

“This is actually one of the examples of the feedback that we got from students,” Zaldana said. “It was initially going to be a transfer from shuttles to get from the Quad to the new campus.”

She added that the complex will also include features that address two other major student concerns — safety and food. The building is equipped with blue emergency phones and extensive exterior lighting, according to Zaldana. In the SEC Café, students will be able to pick up bagged lunches similar to FlyBy meals, or buy food using BoardPlus or their Graduate School of Arts and Sciences meal plan.

SEAS faculty will begin teaching the complex’s inaugural classes in September, and a grand opening event with University President Lawrence S. Bacow will follow shortly after.

“We want to think about it as Harvard is really growing as a campus, not just that SEAS is moving away,” Zaldana said.