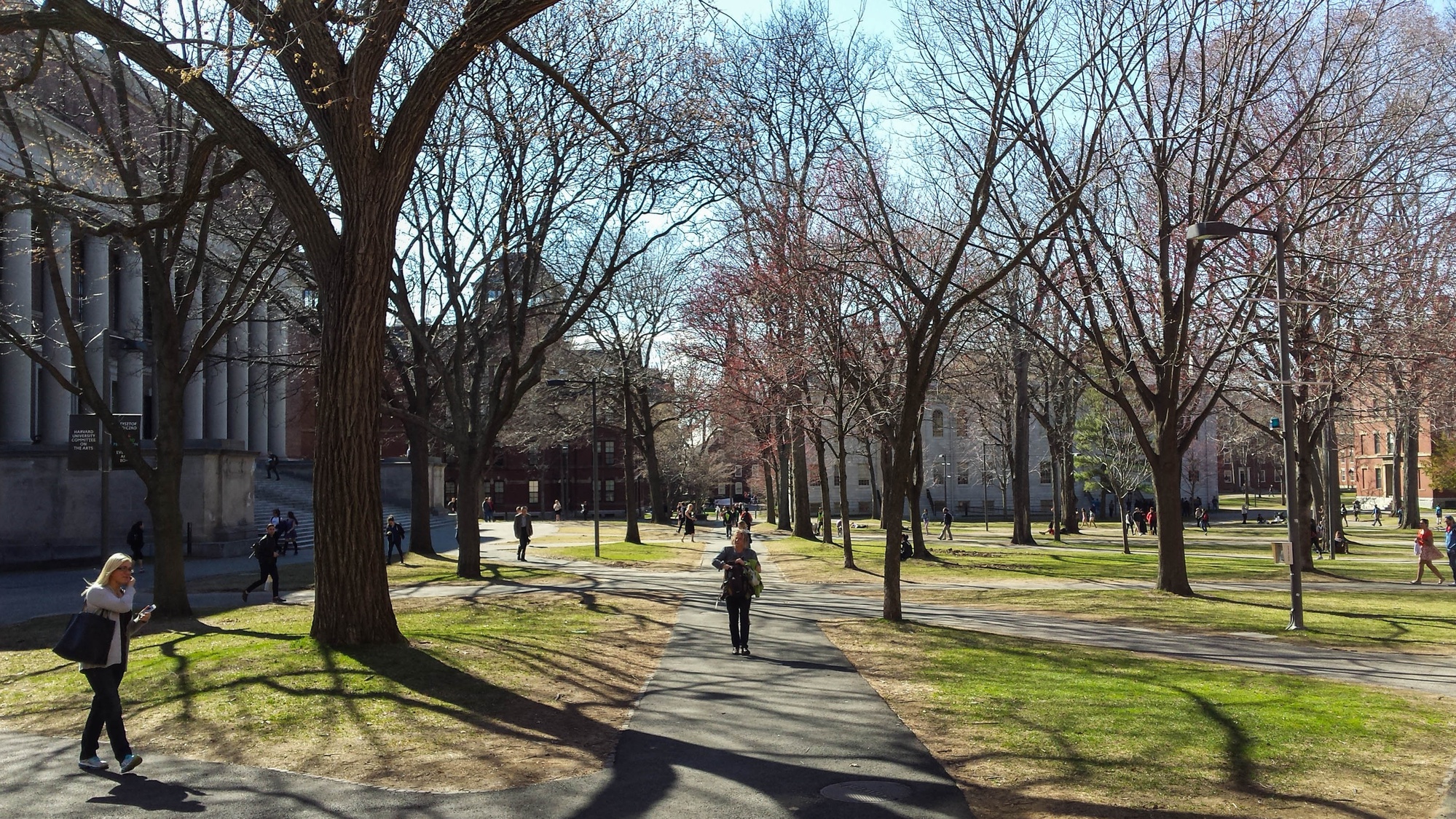 Shadows of trees spread across Tercentenary Theater as students and visitors walk through the yard on a warm Wednesday.
By Juliet E. Isselbacher and Amanda Y. Su, Crimson Staff Writers

The coronavirus upended undergraduates’ semesters, forcing them to vacate campus more than a month ago. Now it has changed their summer plans, too — a shift students are adjusting to as they face expanding disruptions to college life.

Dean of the College Rakesh Khurana said in a Friday interview that though he views the decision to move summer programming online as “disappointing,” it was the only “responsible” path forward.

“We’re doing everything we can right now to work with students and faculty to support them for the planned work they had to see what might be able to be done remotely,” Khurana said. “We are trying to use the summer as an opportunity to continue to allow us to fulfill projects and goals even if we're not on campus.”

Many students hoping to conduct research through Harvard’s various research summer programs have had to rethink their projects.

Harvard College Research Program administrator Elizabeth E. Perten wrote in an email to applicants last week that students awarded funding must submit a revised proposal for remote work, taking into account restrictions on laboratory and archival research, and other research that could require travel.

James Chen ’23, who applied to receive HCRP funding this summer, said he originally planned to live on campus in DeWolfe housing and conduct research at the Broad Institute.

“It’s lab work, so I don’t know what remotely doing that would look like within a new model,” he said. “I already started considering this possibility, because considering how things are, the Broad Institute, as far as I know, is closed at the moment.”

The Program for Research in Science and Engineering — a summer residential research program — also announced last week that it would move to an online format and asked students to submit remote research proposals.

Jeffrey R. Prince ’22, a PRISE fellow, said he expected to live on campus in Winthrop House and conduct research on peroxisomal biogenesis in Northwest Labs and the Denic Lab this summer.

Prince said some projects, such as those that involve computational research, may lend themselves more easily to virtual work than those that require access to labs.

“I’ve been trying to be creative, working with lab mentors to try to figure out how to do the most substantive project possible,” Prince said.

Prince added that PRISE has also maintained its promise of providing participants a stipend and removed its rule that students may only participate in the program once. He said PRISE is planning to hold virtual speaker series and community events for this year’s participants.

“It’s definitely really disappointing that we’re not going to have that residential, on-campus summer community,” he said. “But I’ve been very pleased and happy with the fact that they’ve been really creative and supporting us as well as possible,” Prince said.

Similarly, the Harvard Global Health Institute announced last week that it would only support remote internships this summer.

Christian Malachy Porter ’23 said he applied for research opportunities through the Harvard Global Health Institute’s internship program, which ultimately offered him two positions — one based in South Africa, and the other based in Boston.

Porter said he was thrilled about the prospect of having a research experience across the globe. But after the College vacated its campus and HGHI informed him the status of international internships was tenuous, he decided to accept the local position studying HIV.

“And then I just recently got an email that everything was canceled, and they may or may not be able to give me a remote position,” he said. “I was planning on going to South Africa, and now I’m gonna be sitting at my kitchen table all summer.”

“Missing out on that is definitely upsetting. In terms of the stipend, that also was going to be really nice,” Porter added. “Financial compensation is really important. A lot of people were depending on having these funds to support themselves throughout the school year.”

Porter said he hoped the College would find a way to financially support students barred from doing internships that would have paid them a stipend.

Katrina J. Hon ’22, who will participate in an HGHI program, said she planned to work at the National Institute for Health and Care Excellence in London over the summer.

She said she is still unsure what a remote format would mean for her program but anticipates that her responsibilities will include researching policy and sitting in on Zoom conference calls.

“I think a big part of why I wanted to go abroad too was to get the office workspace, the office setting experience, but I guess there’s not as much of that now,” she said.

“But I’m excited to still be able to be a part of it and get to meet the people at NICE and the type of work that they're doing,” she added. “It will be cool to get involved in health policy at a time like this.”

For students planning to take Summer School courses for College credit, Khurana said the Faculty of Arts and Sciences has approved “select” online courses for credit. In past years, only on-campus summer school courses have been eligible.

Lilliana S. C. Brandão ’22 said she was planning to work as a proctor at the Summer School, while simultaneously working for 20 hours each week at a chemistry lab.

But with Summer School programming moving online, Brandão said she has lost her proctoring job — as well as the free housing and food that accompanies it.

“I wasn’t surprised, but it’s honestly pretty disappointing because leaving and having to go home in the middle of the semester, it made me even more excited to come back for the summer possibly. So that’s something I was still holding on to the hope of being able to do,” she said.

Brandão added that she is grateful she is still able to take a Summer School course free of charge, but noted that “it’s not a source of income.” She said she is currently searching for a remote research position with a stipend.

The College’s decision to move its summer programming online will not only affect students, but also the communities they serve — including through the Summer Urban Program, which operates 10 summer camps in the Greater Boston area.

The Refugee Youth Summer Enrichment Program, one of SUP’s programs, serves recently immigrated teens in the Greater Boston area, welcoming them onto Harvard’s campus for afternoon sessions that build college readiness and prepare them for standardized tests.

Wellesley College student and RYSE co-director Sarai Hertz-Velázquez said the program’s transition online would not prove prohibitively difficult, since Cambridge and Boston public schools provide their students with Chromebooks and hotspots if they cannot afford them.

“In terms of technology, we’re hoping that we’re covered,” she said.

Hertz-Velázquez added that all students hired as senior counselors across SUP would keep their jobs.

“Because we promised them a position and we really wanted to work with them — thought they’d be a great fit for SUP — we still want them to be involved in the process even moving and shifting to an online platform,” she said.

“I know this causes a lot of challenges during this period, dislocations are significant, but they’re being done with the aim of getting us back to a community that can once again engage in person,” he added.