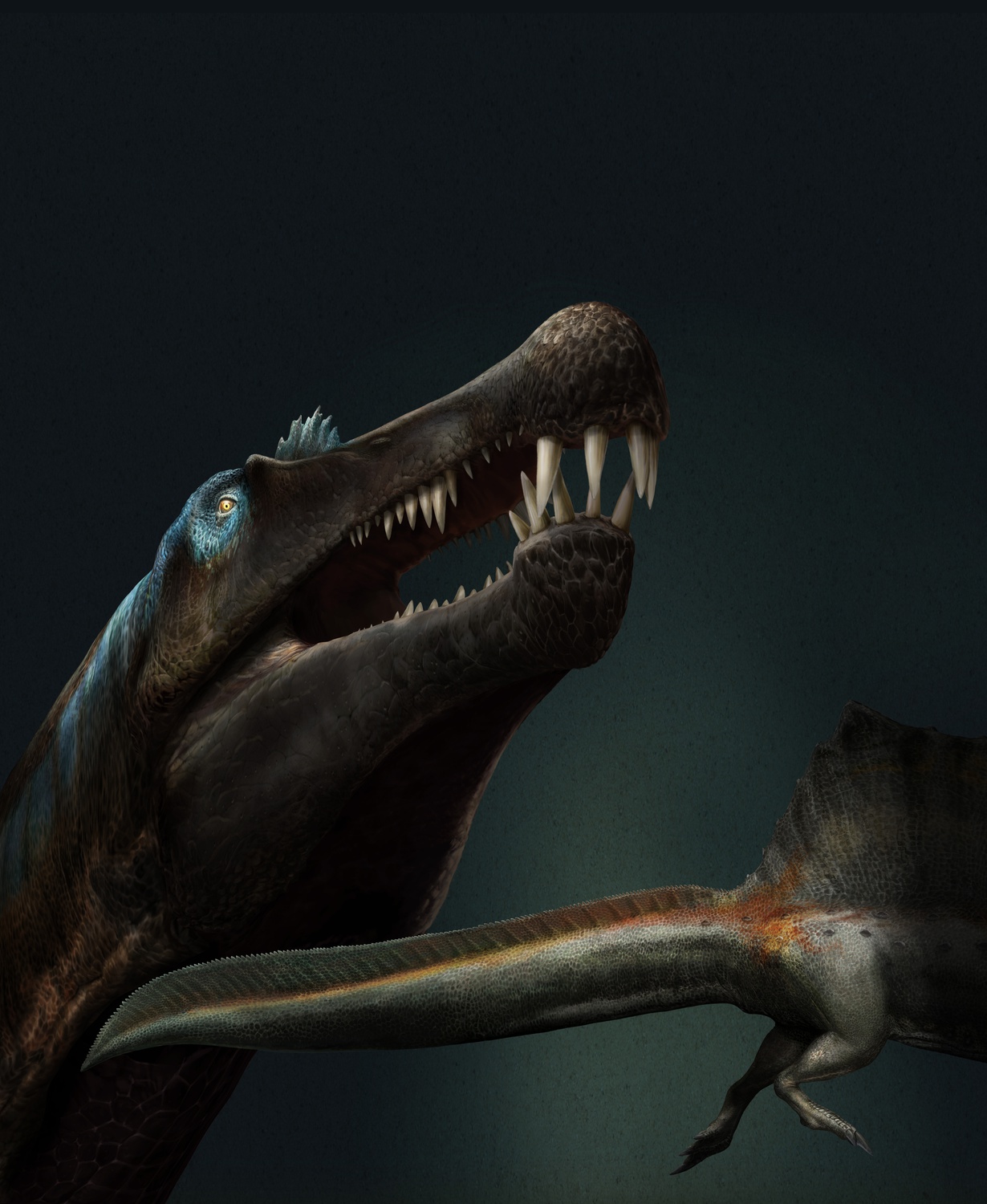 An artist's reconstruction of Spinosaurus, which an international research team recently determined to be the first known swimming dinosaur. By Courtesy of Davide Bonadonna
By Simon J. Levien, Crimson Staff Writer

An international research team that includes two Harvard professors has determined that the Spinosaurus is the first known swimming dinosaur, according to a study published Wednesday in the peer-reviewed journal Nature.

Study co-authors Stephanie E. Pierce and George V. Lauder ’76 — professors in the Department of Organismic and Evolutionary Biology — constructed a plastic two-dimensional model of a Spinosaurus tail and tested its swimming ability against that of other species’ model tails, including other dinosaurs and crocodiles. Their experimental findings were consistent with the concept of a water-dwelling dinosaur.

Lead author and University of Detroit Mercy professor Nizar Ibrahim has been studying a Spinosaurus aegyptiacus fossil since 2014. After analyzing its anatomical structure, the team only had circumstantial evidence pointing to an aquatic lifestyle.

Persevering through sandstorms, flooding, and close encounters with snakes, his team returned to the fossil’s Saharan dig site over years to unearth a near-complete Spinosaurus tail, Ibrahim said.

“We realized the tail was actually utterly unique,” Ibrahim said. “We’ve never seen anything like this in another dinosaur.”

In 2019, Ibrahim contacted Pierce and Lauder to run an experimental analysis of the tail in a water flume — an artificial chute of water.

After testing, Lauder — who works with biomechanical hydrodynamics and fish robots — concluded that the tail must have been used for swimming.

“The tail of Spinosaurus is an aquatic propulsive structure,” Lauder said. “Crocodiles use a big flat tail to swim in the water. That’s really what this was like, but on a huge dinosaur.”

The lengthy pad-like tail is befitting of the 30- to 40-foot-long creature. At its most aquatic, the Spinosaurus — along with many other dinosaurs — was once thought to only wade in water. There were previously no water-dwelling dinosaurs in the fossil record.

Ibrahim commented on how the past scientific consensus was that dinosaurs were exclusively land animals.

“They’re basically firmly grounded in the terrestrial world,” he said. “It became like a dogma. You can see this in every children’s dinosaur book. They’ll tell you dinosaurs are land-dwelling animals.”

“It just really opened our mind, I think, to the tremendous diversity of dinosaurs that now appears to be much greater than we thought before,” Lauder added.

Lauder said the next research step is to pursue a three-dimensional tail model to get a better sense of the dinosaur’s hydrodynamics. For Ibrahim, he said he hopes museum collections will reevaluate unusual specimens for potential aquatic characteristics, now that the dam has broken on swimming dinosaurs.

“I think it broke the internet yesterday,” Pierce said in a Thursday interview. “The top four papers [on Nature] are Spinosaurus and three COVID-19 papers,” Pierce said.

The spinosaurus study has garnered a Twitter following. #Spinosaurus was one of the top trending hashtags, “up there with Elon Musk and COVID-19,” according to Ibrahim.

“I’m choking up, I can’t put it into words,” Ibrahim added. “If people are using hashtag Spinosaurus instead of hashtag insert-name-of-celebrity, great news to me.”