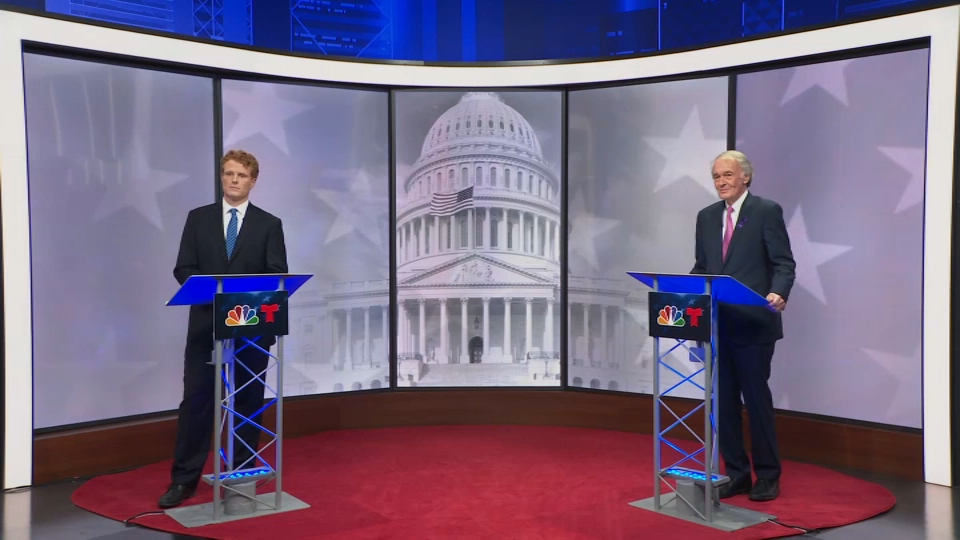 With just over a month until the election, Kennedy and Markey — who have escalated attacks on one another in recent weeks — spent much of the forum squabbling over individual votes that they alleged were non-progressive and bickering about endorsements and time spent in the commonwealth.

What started as a social media spat reached the debate stage Sunday, as Kennedy went after Markey for his support of a bill that funded beds at immigration detention centers — only to have the charge turned around on him.

The bill in question — a 2013 Department of Homeland Security appropriations act — stands out as an unusual non-progressive vote from Markey, who sided at the time with House Republicans to maintain funding for more than 30,000 Immigration and Customs Enforcement detention beds.

“Senator Markey voted with Republican immigration extremists to try to fight back against an Obama administration trying to decrease the number of detention beds,” Kennedy said — one in a laundry list of things in his opponent’s 37-year Congressional record that he said “deserves attention.”

“We were betrayed,” Vargas said in the video.

Kennedy, however, voted for the provision, too, in a later omnibus spending package — albeit one that was supported by most Democrats, including the same members of the Hispanic Caucus.

“Give me a break, Congressman,” Markey said. “You took the same position.”

When the issue came up for a second time later in the debate, Kennedy took issue with Markey conflating the two votes.

“Senator Markey continues to try to muddy the waters so that he doesn’t have to respond to his vote,” Kennedy said, as his opponent scoffed on the right side of the split-screen. “He voted with Republican extremists against President Obama and the Congressional Hispanic Caucus to try to actually provide more detention beds to house immigrants. That’s his vote.”

“It got put in there because it passed because people like Senator Markey voted for it to begin with,” Kennedy later added.

The debate — which was broadcast on NBC10 Boston, Telemundo Boston, and New England Cable News (NECN) — comes at a crucial time in the race. Though two more debates remain ahead of the September 1 primary, new voting regulations enacted amid the coronavirus crisis that will send every registered voter in the commonwealth an absentee ballot application have added urgency to the race, as many voters may cast ballots ahead of election day.

Kennedy and Markey also sparred over criminal justice reform, with Kenney accusing Markey of having “voted for mass incarceration” and knocking his past opposition to busing to integrate Boston public schools.

Markey said he was “proud” of his record on criminal justice reform, pointing to an endorsement from Suffolk County District Attorney Rachael Rollins and his advocacy of the Next Step Act, which would change sentencing guidelines and police training.

Markey also touted his support as a state legislator for a proposal brought by Bill Owens, the first African American elected to the state Senate, to create a state Senate district in a minority neighborhood.

Asked if they support defunding police departments, both candidates punted on specifics.

Kennedy faced questions regarding his past affiliation with the fraternity Kappa Alpha, which he was a member of as an undergraduate at Stanford University. Kennedy disaffiliated with KA — which previously referred to the confederate general Robert E. Lee as its “spiritual founder” on its website — last year.

“I wish I could go back and tell my 18-year-old me that that was going to be a mistake,” he added.

The two also had a spat over endorsements when NBC10 political reporter Alison King pressed Markey on the amount of time he spends in Massachusetts as opposed to his second home in Chevy Chase, Md. — an issue that has long dogged Markey and that Kennedy has capitalized on in previous debates.

Markey pointed to the endorsement of numerous mayors and elected officials from across the state, including Boston Mayor Martin J. Walsh and others from Kennedy’s own district.

“Senator, of course they endorse you,” Kennedy said. “Most of them endorsed you before I got in this race. And that’s fine, that’s the way this goes. This race is not going to be won on endorsements.”

“Then don’t say that I’m not doing the job if those people with whom I’m partnering are endorsing me in this race,” Markey interjected.

Kennedy — the heir to one of America’s most prominent political families ever — portrayed himself as an outsider multiple times throughout the debate, accusing Markey of running on “the politics of the past.”

“This is why we need change,” Kennedy said. “Because it is a Washington thing to think that endorsements of elected officials means credibility and means success.”