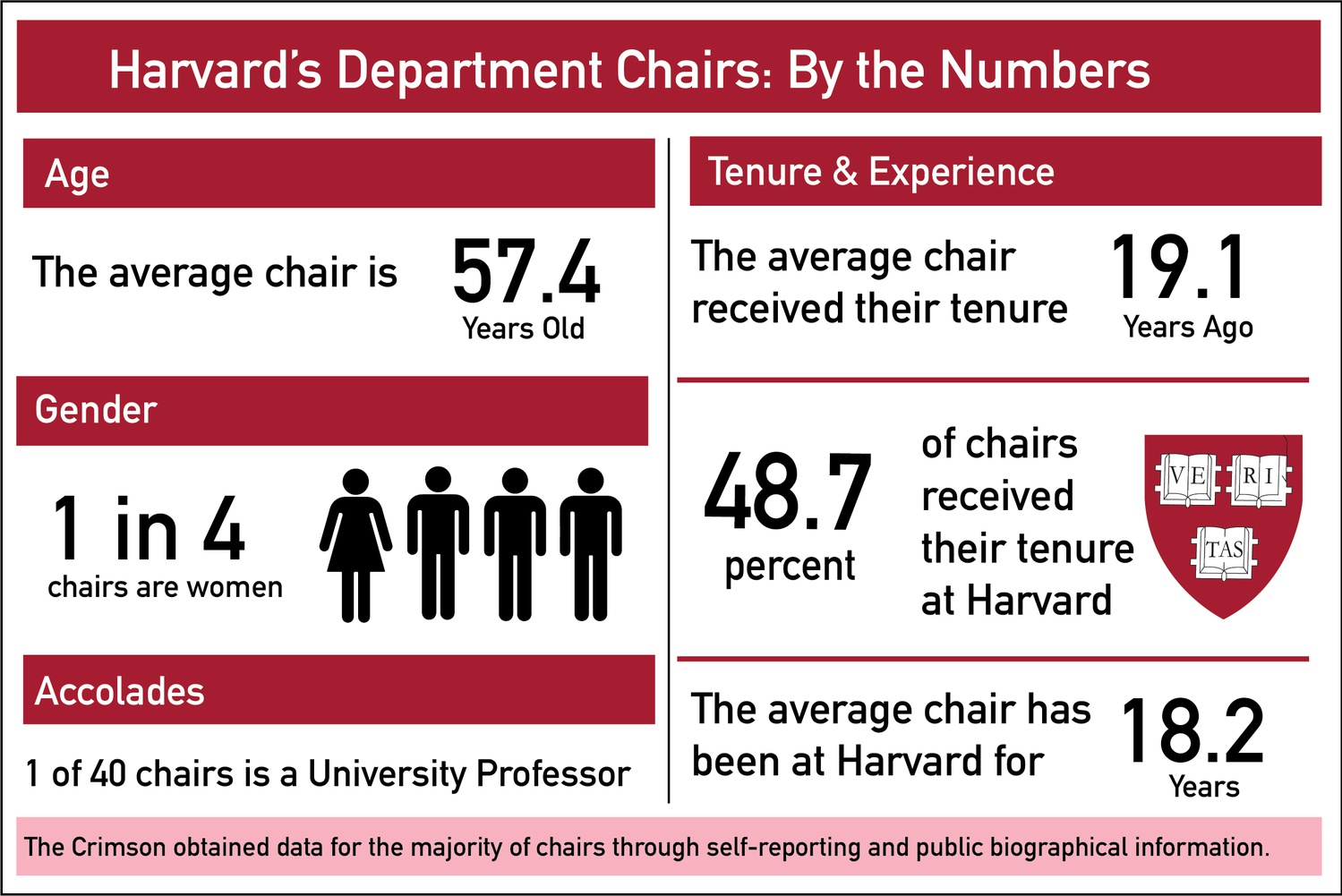 The average department chair received tenure over 19 years ago and has served as a faculty member at Harvard for 18 years. By Camille G. Caldera
By James S. Bikales and Kevin R. Chen, Crimson Staff Writers

Nearly half of the 40 department chairs in Harvard’s Faculty of Arts and Sciences received tenure within Harvard and nearly three-quarters have been teaching at the University for more than 15 years, an analysis by The Crimson found.

Department chairs are responsible for developing undergraduate and graduate curricula, overseeing faculty recruiting and promotion, managing departmental budgets, and resolving disputes, according to an FAS handbook distributed to chairs.

FAS department chairs typically serve three-year terms. Near the end of a chair’s appointment, the dean of their FAS division requests recommendations for the next chair from all departmental faculty before extending an offer to a senior faculty member.

Each department has different norms for the number of terms department chairs typically serve, according to Organismic and Evolutionary Biology chair Elena M. Kramer.

“In our department, chairs usually serve two terms, and occasionally three,” Kramer said. “In other departments, the culture is different. They only ever do one.”

Department chairs tend to be well established in their careers and many have spent much of their academic lives in Cambridge, according to The Crimson’s analysis.

The Crimson used publicly available biographical data and inquiries with chairs to compile the data. The majority of chairs verified their information in response to inquiries; not all chairs responded to requests for data or had information available online.

Human Evolutionary Biology chair Joseph Henrich — who arrived at Harvard only five years ago and became chair two years ago — said he recognized why experience at Harvard is a boon for chairs.

“It's really valuable if you’ve been around the University for a long time because Harvard is a byzantine organization,” he said. “Just knowing your way around the byzantine bureaucracy, then, oftentimes, having personal relationships with other people can really help you get things done.”

Faculty may also be compensated for the additional work they take while leading their departments. In the FAS’s Sciences Division, chairs receive a bonus, as well as a choice between a reduced teaching load or a research stipend, Kramer said.

But many faculty see the role as a service to the University and their department rather than a prestigious position or stepping stone for advancement, several department chairs said. They noted that the position entails a significant load of administrative work which siphons time away from faculty members’ research pursuits.

“It’s a lot of work, so often when people are appointed chairs, you’re torn between, should I congratulate you or offer condolences?” said Music chair Ingrid T. Monson, who led her department from 2005 to 2008 and stepped into the chair role again in 2019.

“Sometimes it’s the case that departments don’t have many people who are willing to be chair, and partly people would rather do their research,” Monson added. “I get it, and I’ll be looking forward to having more time for my research when this is over too, but part of agreeing to be a chair is being a good academic citizen.”

Henrich said some departments struggle to find interested professors to fill the positions, given the degree to which Harvard faculty tend to value their research.

“Just to become a Harvard professor, you’ve got to spend this large amount of time and intensity and love for your research,” Henrich said. “For many people that often goes on well past tenure and then there’s always this push-pull between allocating away from that research focus.”

Some faculty’s preference for research over administration may be reflected in the relatively small degree of crossover between the ranks of FAS’s department chairs and Harvard’s University Professors — the University’s highest faculty honor, which is primarily granted to recognize outstanding cross-disciplinary research. Only one University Professor, historian Ann M. Blair, currently serves as a department chair; she started in the role in July.

Philosophy chair Edward J. “Ned” Hall agreed that professors tend to self-select into or out of the department chair role depending on their focus on research, adding that their degree of comfort with conflict resolution and problem-solving also factors into the decision.

“It does come at a cost. I can’t get as much research done,” Hall said. “You have to deal with situations involving conflict. At some point, that’s inevitable.”

Hall added that, while he does have less time for his research, he is glad to have the opportunity to serve his department.

“I won’t be sorry to stop being chair, but I’m happy I’m doing it,” he said. “When I say it’s a lot of work, that sounds negative. It’s a lot of meaningful work.”

“You can sense that you’re able to make a difference in people’s lives, at least a little bit,” he added.