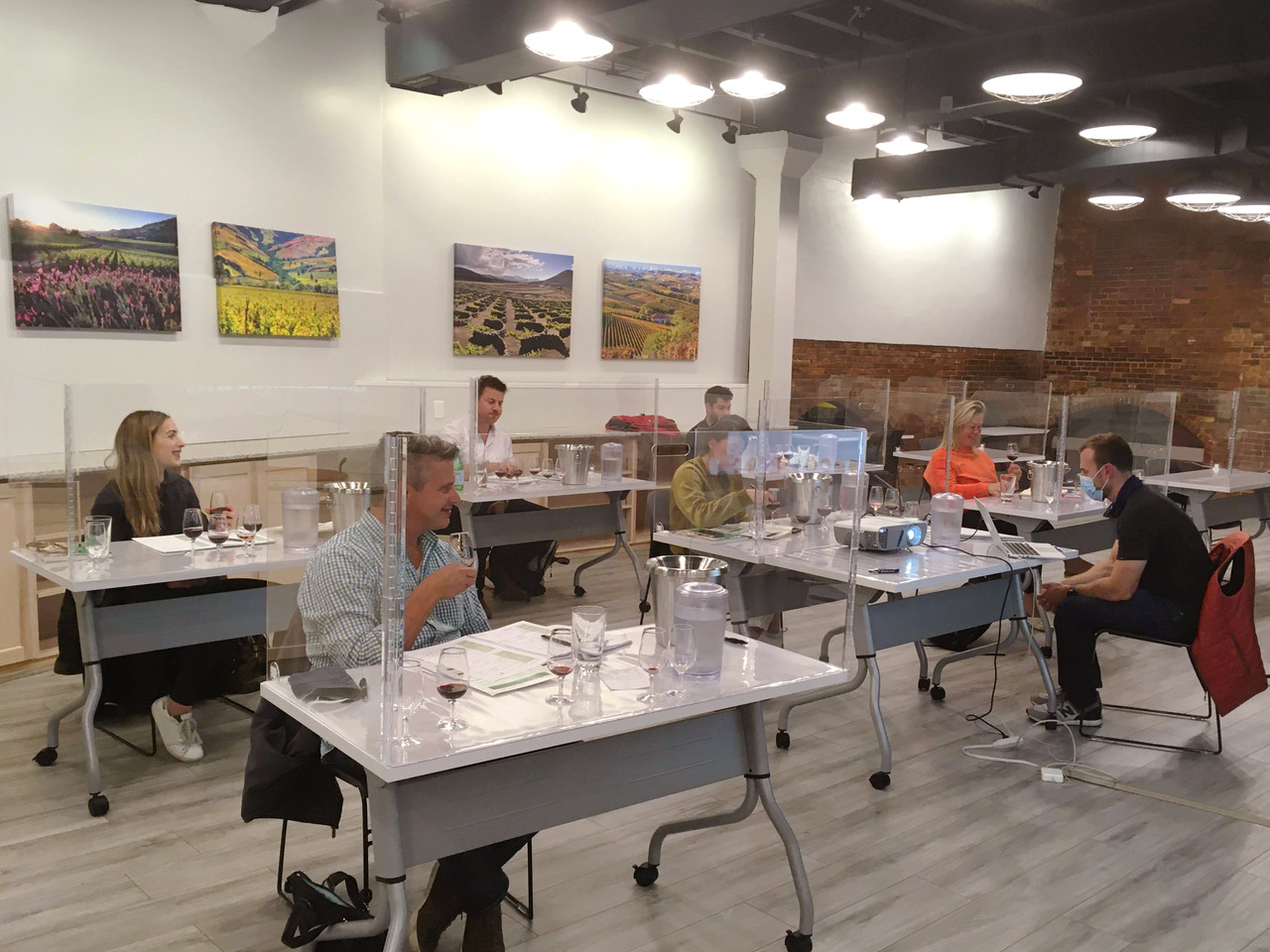 Students participate in a class at Commonwealth Wine School, which opened for in-person classes this month at the Garage in Harvard Square. By Courtesy of J. Petersen
By Simon J. Levien, Crimson Staff Writer

Commonwealth Wine School — which offers wine classes ranging from tastings to multi-year certification programs — opened for in-person classes this month at the Garage in Harvard Square.

Owner and director Jessica L. Sculley first signed a lease for the business in late February but had to postpone the school’s physical opening until September due to the coronavirus pandemic. Sculley said the school began offering a full slate of hybrid in-person and online classes last week.

Harvard Square Business Association executive director Denise A. Jillson said she was glad to see the school open in Harvard Square even in the middle of a pandemic.

“Very excited for her, and I know she’s going to be successful,” Jillson said of Sculley.“Seeing the advent of a new business, Commonwealth, is particularly hopeful for us.”

Sculley, a Cambridge resident and former math and science teacher, said she has always been interested in wine education.

Commonwealth Wine School initially opened a pop-up store on Brattle Street last fall, according to Jillson. Due to the pandemic, the school began offering online classes in May and has since expanded its offerings to include in-person instruction.

Jillson, who said the school is “something we haven’t had in the Square before,” promoted its opening on the association’s Facebook page.

Sculley described the precautions the business was taking, including separating its “consortium” of wine educators with plexiglass shields, maintaining seven feet of distance between tables, and employing a robust air purification system.

“I’m still pretty dedicated to wanting to create a community, but I am not interested in contributing to a public health crisis,” Sculley said.

Opening in the middle of the pandemic has been a “precarious” endeavor, according to Sculley, though the business has already attracted clientele from across the country. Many students reside in Cambridge and Boston, but others come from all over New England to take classes, she said. Online learners have joined classes from as far as Chicago and Cincinnati.

Despite the precautions, Sculley noted, many patrons would still rather stay home and take classes online. She called her hybrid reopening plan “a swivel system” that would allow students to take the same classes either online or in person.

Sculley said that business is “picking up” and she believes there is enough interest to sustain Commonwealth Wine School into the future as its operations continue through the pandemic.

“We’ve made our expectations really clear. And I think people feel safe with those expectations,” Sculley said. “I’m committed to Harvard Square being a vibrant place, not a place with empty storefronts.”