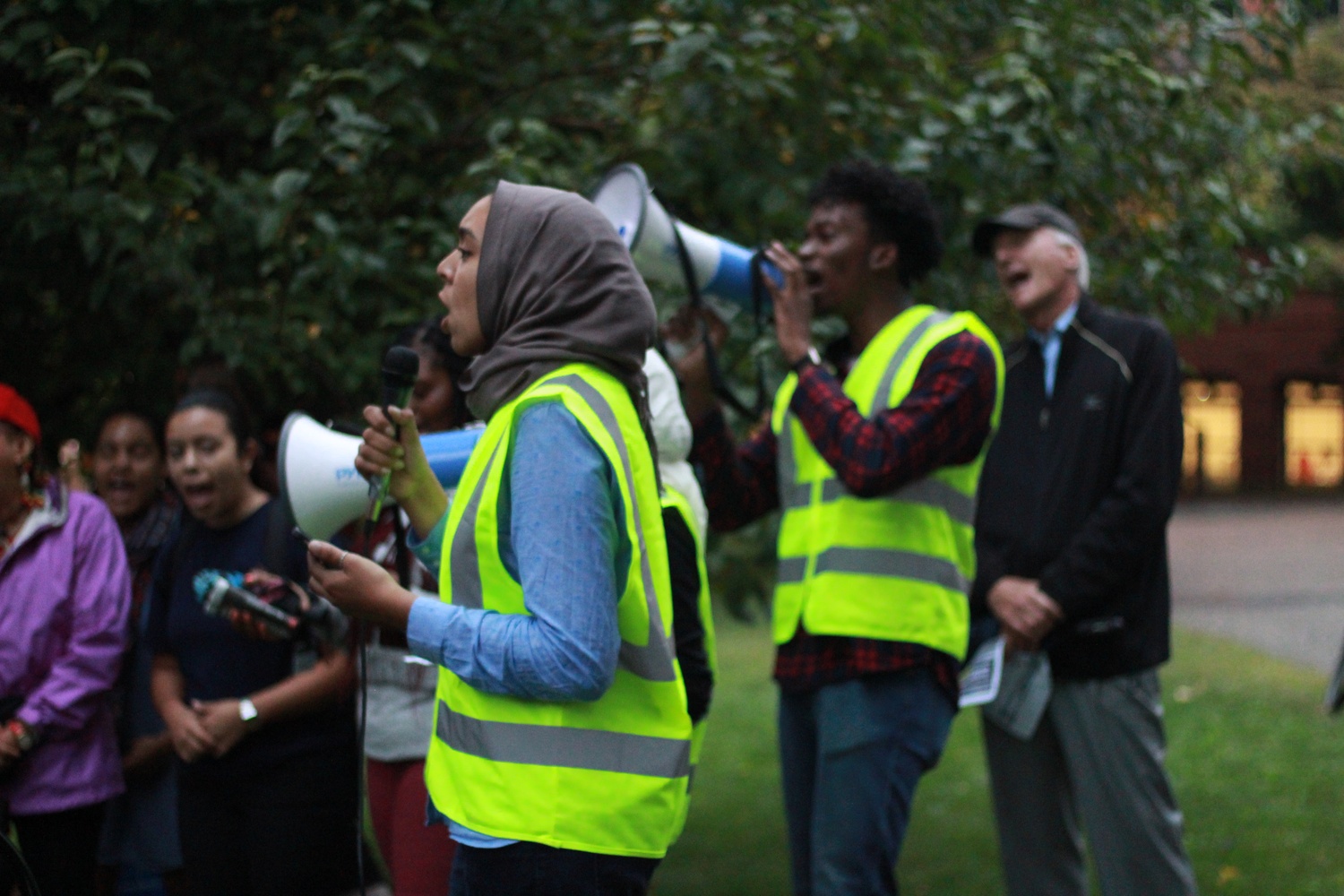 Students gathered in front of the Geological Museum in 2017 to protest a talk by Charles A. Murray '65. By Krystal K. Phu
By Kevin R. Chen and Natalie L. Kahn, Crimson Staff Writers

Charles A. Murray ’65 will speak virtually on Oct. 16 to students in the course Government 50: “Data” as part of the course’s optional speaker series entitled “Data Scientists, Data Professionals, Data Dissidents.”

Murray — whose work the Southern Poverty Law Center has termed “racist pseudoscience” – is best known for his 1994 book “The Bell Curve: Intelligence and Class Structure in American Life,” which advanced widely discredited claims that there are differences in intelligence between classes, partially attributable to race and ethnicity. When Murray last spoke at Harvard in 2017, students and faculty protested his presence on campus.

Murray will give a lecture on his 2020 book “Human Diversity: The Biology of Gender, Race, and Class” at the invitation of Government preceptor and Gov 50 instructor David D. Kane, Murray wrote in an email.

In “Human Diversity,” Murray criticizes what he calls the “orthodoxy” in social science that gender and race are social constructs and that class is a function of privilege. He instead argues in favor of ten propositions, including the existence of sex differences in personality, the existence of genetic distinctions corresponding to self-identified race and ethnicity, and the notion that class structure is based on differences in abilities with a substantial genetic component.

Murray writes in the introduction to the book that even though he believes groups of people differ genetically, he rejects claims that they can be ranked from superior to inferior, or that differences among them are related to human worth or dignity.

Some students expressed reservations about participating in the panel with Murray. Liam M. F. Hall ’23 said he was ambivalent about serving as a student panelist for the talk.

“I’m going to have to give a little more thought to the conversation that would be had,” said Hall.

“It is important to engage, but I also think that there should be a certain ground that everyone is kind of playing on — that you shouldn't be thinking any less of anybody just because of who they are," he added.

Kane defended his decision to invite Murray to speak in an email.

“Harvard is the greatest university in the world. Whatever you think about the quality of his work, Charles Murray is one of the most influential social scientists of the last 50 years,” Kane wrote. “Why wouldn’t I invite him?”

Kane added he believes it is important to be exposed to more right-wing perspectives.

“In the age of Donald Trump, Viktor Orbán and Jair Bolsonaro, Harvard needs more speakers from the right, not fewer,” he wrote.

—Staff writer Natalie L. Kahn can be reached at natalie.kahn@thecrimson.com.