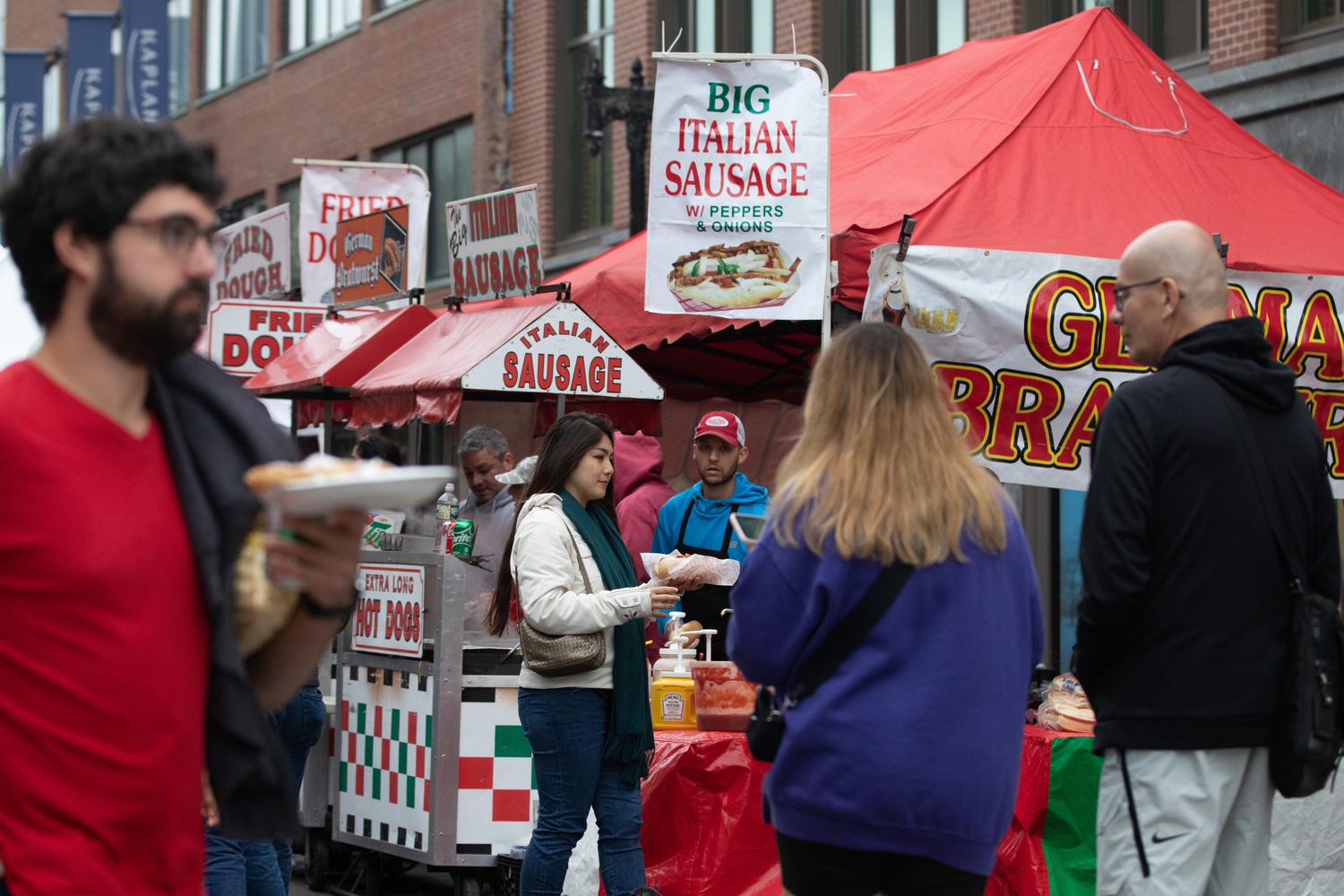 After organizing a four-day virtual event last year, the HSBA celebrated the yearly tradition in person this year, with the goal of spotlighting Square businesses still recovering from the Covid-19 pandemic.

While the time-honored HONK! Parade – which typically accompanies Oktoberfest – did not take place this year due to health and safety concerns, Oktoberfest still drew a large crowd.

Simon Eber – a member of Cambridge-based band Vibe Check – said Oktoberfest was the largest crowd the band had ever played for, something he hopes will give them more “traction.”

“This is by far the coolest gig we’ve ever played,” Eber said. “To come out and see so many people and have them be so into the performance was just a great experience.”

“This is like a whole new level, it feels really like a special moment for the group,” Eber added.

Next to the live entertainment, local artists operated booths selling handmade items, from resin trinkets to wallets to jewelry.

Alan Casso, who has represented Revels — a Watertown performing arts company — at the Harvard Square Oktoberfest for over 30 years, described the festival as “terrific.”

“I think this might be a bit of a scaled-down version, but we’re getting a lot of traffic,” he said.

“It’s really vital that we get back up and running this year to a more healthy state, and build our way up to more normalcy,” he added. “We have hopes for this year that people will be coming back to indoor events like the Christmas Revels.”

Resin and abstract artist Charlotte A. Kennedy attended Oktoberfest Sunday for the first time as a vendor. Kennedy said she sold a few of her pieces during the festivities.

The Rotary Club of Cambridge featured chalk murals created by local artists in their “Chalk-on-the-Walk” art installation, which transformed Church St. for the occasion.

Nicholas Ghilardi, a local artist with over 10 years of experience in chalk art, drew an enormous blue cartoon dragon for the street art exhibition.

Ghilardi, who has participated in Oktoberfest in previous years, said turnout was “a little slower” than usual.

“They kind of kept it a little lower key because of everything that’s going on,” he said.

Many Harvard students also attended the festivities in the Square.

Eric Zheng ’23 discovered the festival while he was on a walk.

“I didn’t know this was going on,” he said. “I think it’s really neat, it’s an interesting way to bring more business into the area, less car traffic, and more actual walking and in-person experiences, so I think they should do this more often.”

“It reminds me of back home in New York, this is how it would look, exactly like this,” he said. “I love the live entertainment.”

Ghosh added, however, that he found the vendor prices at the festival a bit high and noted that they could have been a “financial barrier” for students and residents.

“I feel like stuff is a little overpriced, though,” he said. “This kind of stuff wouldn’t be as expensive if you get it online or something like that, so it’s a little financial barrier for people, but overall, the experience has been really good.”

Abia S. Khan ’24 said Oktoberfest was a “nice change of pace” for the Square.

“Especially after a year and a half of isolation, this is a great way to build community,” she said. “I lived on campus all year, and this is the most people I’ve ever seen.”