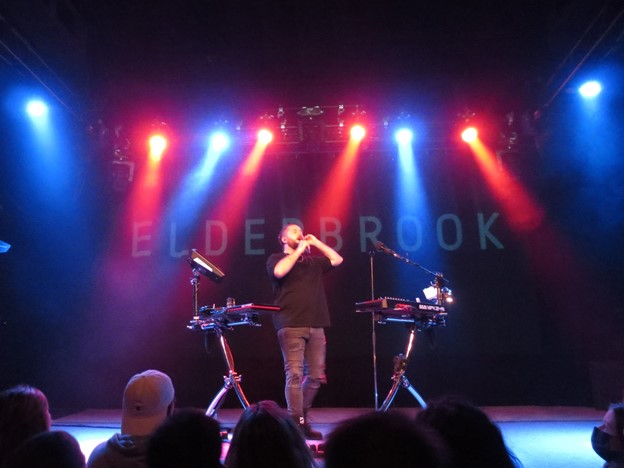 On Friday, Oct. 8, a crowd of eager fans and wayfaring clubbers alike flooded in to see the English musician Alexander Kotz — also known as Elderbook — take the stage at The Sinclair. Together with Kotz, they danced the night away at an EDM concert like no other.

Sporting a man bun and a simple black tee, Kotz looked to be swallowed up by the lights and spacious stage at a first glance. The deep bass thrummed below the feet of the anticipating crowd, high hopes for this overseas performance building up pressure. However, as soon as he got his hands on his DJ set, Kotz’s stage presence grew three-fold, getting the crowd instantly warmed up by the first beat drop. Kotz fearlessly belted the impressively high notes in “Old Friend” and the melodic ad-libs in “Talking,” and then flawlessly transitioned into jumping along with the crowd to the more upbeat rhythm in “Something About You.” Quite the multitasker, he squatted low and jumped high with the change of tempo, all while controlling different FX stations and pounding at the electronic drum set. The setlist got progressively more upbeat and had both Kotz and the crowd working up a sweat to the funky tempo of songs like “Body,” and “Why Do We Shake in the Cold?”. Soon enough, he dialed it back to more lowkey feel-good vibes with some of his most popular hits like “Numb” and “Never Gonna Forget,” with Diplo. He also shouted out some OG fans in the crowd as they joined him in singing the old but gold gem, “Cola.”

There’s something so magically simplistic about Kotz. The melodic ad-libs perfectly harmonized with his low-fi beats, steering clear of the trademark reworked dissonance of heavier dance music altogether. The predictable chord progressions and melodies that sound familiar made it easy to interact with the first-time listeners and groupies alike. His emotional lyrics complemented the melody, setting an aspirational mood as he sang about following one’s “Inner Light,” self-plugging his newly-released EP, “Innerlight.”

But what really worked for Kotz wasn’t just his thematic setlist — it was his larger-than-life charisma that stole the show.

Instead of cruising through the lofi composition of his songs, Kotz worked up a sweat to put on a show. He took to the synth vocalizer, showcasing his mastery of the sound system, all without missing a beat of his belts and complex vocalizations. One hand on his drum stick, the other on the DJ set, Kotz also had time to flirt with the audience, stealing occasional glances with the finesse and confidence of a seasoned performer and then some. That impressive stage presence was felt when the buzz of lively conversations out on the floor died down soon after he took the stage, the audience quickly becoming enraptured by his performance. His unrelenting energy was a force to be reckoned with as he burst into dance at the sound of every beat drop, the red, blue, and green hues of the stage effects amplifying his charisma.

It is truly commendable how hyped up Kotz got the crowd with just his impressive work ethic. He belted the soulful lyrics until his voice went rasp, ending the night with a soulful message about the joys of making it out on the other side of quarantine and finally being able to perform again.