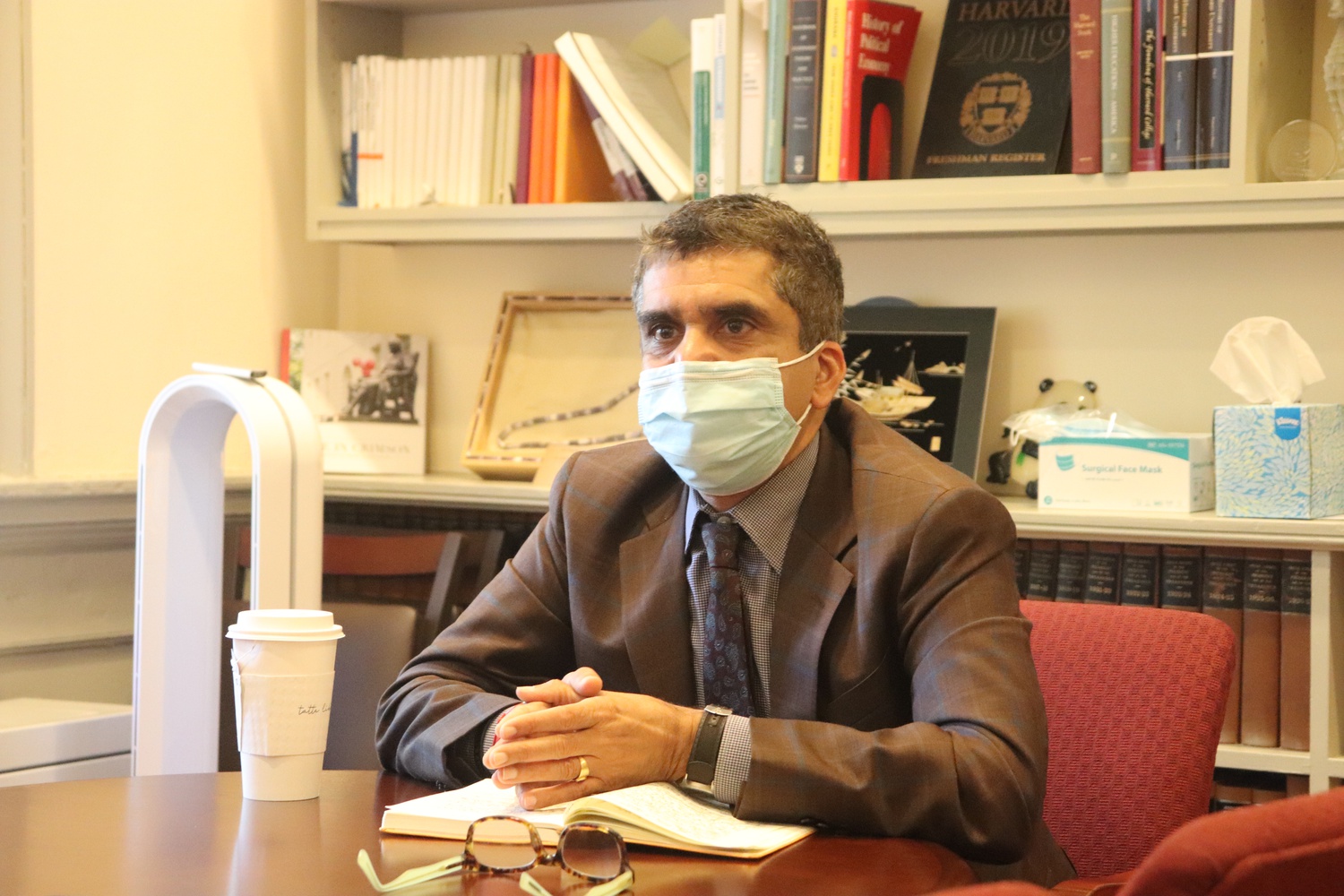 Dean of the College Rakesh Khurana in his office in September 2021. By Truong L. Nguyen
By Alex Koller and Taylor C. Peterman, Crimson Staff Writers

With the graduate student union poised to stage a walkout in the coming days, Dean of the College Rakesh Khurana said Friday that the College is making plans to maintain academic continuity if teaching fellows and course assistants leave the classroom for the picket line.

The Harvard Graduate Students Union-United Automobile Workers threatened to initiate a three-day strike on Oct. 27 if an agreement with the University is not reached. Contract negotiations between Harvard and the union, which began in March, have been hampered by ongoing contention surrounding compensation, benefits, and grievance procedures for sexual harassment complaints.

Khurana said in an interview Friday that in advance of the potential strike, the College is working to avoid disruption to classes.

“What the College is trying to do is to minimize any kind of negative impact on our educational mission if there is a strike,” he said. “We are undertaking contingency planning, working with our faculty and our staff to support our students.”

“This is a prudent thing to do — about ensuring academic continuity for our students, while also respecting the rights of our graduate students to vote to organize a strike,” Khurana added.

In advance of Wednesday’s deadline, many union members — who work as teaching fellows, course assistants, and graduate research assistants — made announcements to their students during class or over email about the strike, their plans to participate in the strike, and ways for undergraduates to get involved.

In addition, some teaching fellows have rescheduled or canceled sections and office hours, and some professors have elected to move classes online.

HGSU-UAW also circulated a document outlining how the strike will affect undergraduates. Per the document, graduate student workers will refrain from grading assignments, responding to emails, and holding sections and office hours if the three-day strike takes place.

“We understand that our strike is going to interfere with your learning or your receipt of grades and feedback,” the document reads. “That being said, it will be up to individual faculty to decide whether or not they will grade or hold sections in the TF’s absence. If a graduate student is your main instructor for a course, then that striking graduate instructor will cancel class.”

Khurana said the College is working to support faculty with resources to avoid disruptions to class instruction during this time.

“Our goal is to make sure that we’re planning for academic continuity for our students and giving our faculty and staff the tools they need to adapt to circumstances as needed,” he said.

In September, the union voted overwhelmingly in favor of initiating a strike — with nearly 92 percent of members in support.

If the union does initiate a strike on Wednesday, it will be its second walkout in two years.

In December 2019, HGSU-UAW went on strike for 29 days following a year of bargaining with the University over issues like compensation and discrimination and sexual harassment grievance policies.

For the duration of the nearly four-week strike, striking union members stopped holding sections and office hours and grading assignments and exams.

University President Lawrence S. Bacow said in an interview last week that the University plans to continue negotiating with the graduate student union and that he is hopeful the two sides can reach an agreement without a strike.

The two sides will convene for one more bargaining session before the deadline on Wednesday, with another scheduled for that day.

Regarding the state of negotiations, Khurana said that he recognizes there is “good will on every side to get to a resolution.”