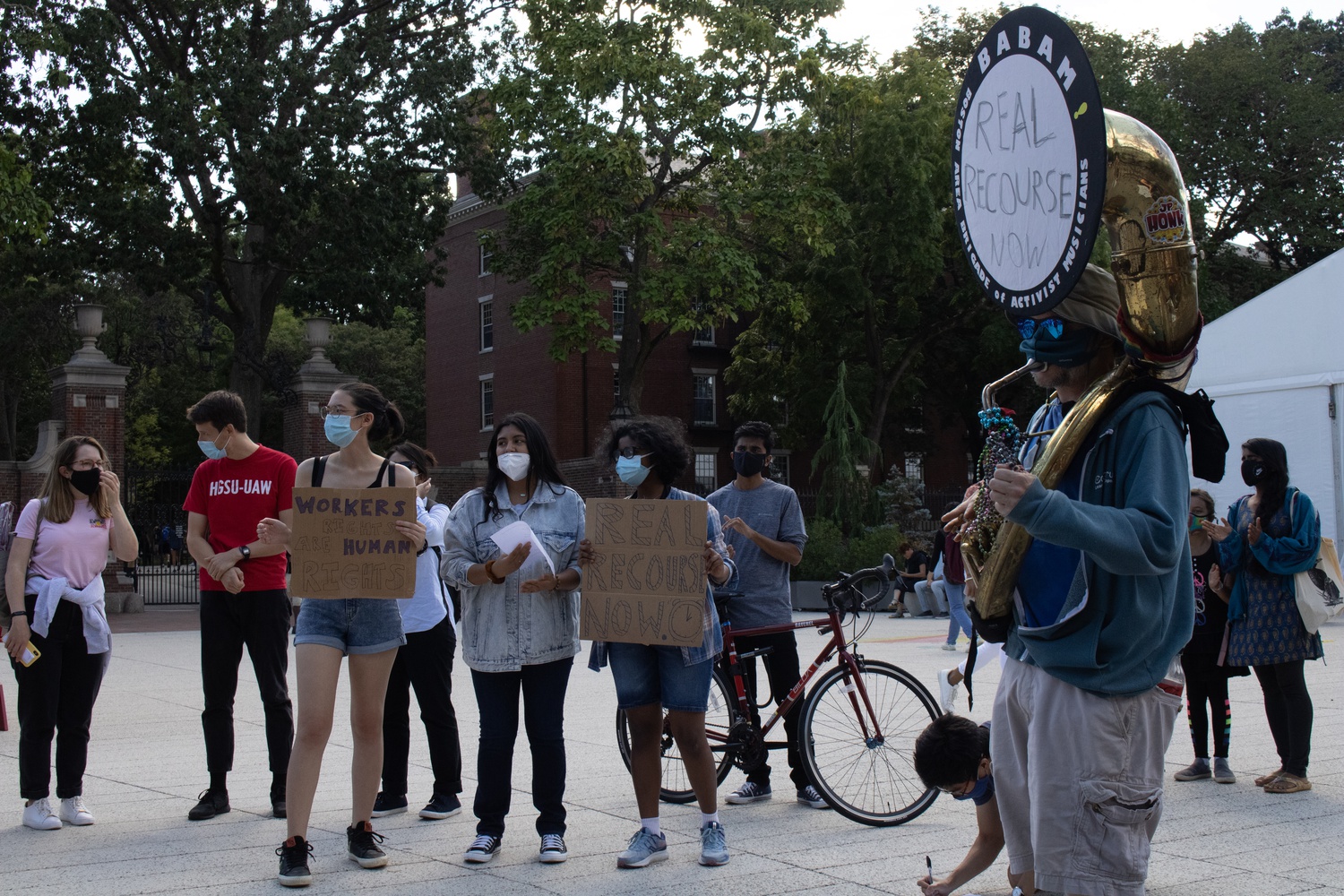 Around 150 Harvard graduate students and their supporters rallied in Science Center plaza Friday, calling on Harvard to allow independent arbitration for discrimination and sexual harassment complaints in their second union contract.

Harvard Graduate Students Union-United Automobile Workers representatives argued for the importance of having an independent arbitration option for victims of sexual harassment and assault, their own experiences filing a harassment complaints through Harvard’s internal system, and the need for complainants to have access to legal counsel.

Steffan B. Paul ’19, an HGSU-UAW organizer, introduced each speaker and helped lead chants.

“These cases are sometimes shoved under the rug,” Paul said in an interview afterwards. “People think that they don’t happen, but they’re happening all the time, and we need to assemble our strike power and fight to make sure that we get these protections that we're asking for.”

After almost six months of bargaining for their second contract, the union and the University have still not reached an agreement over non-discrimination and harassment procedures. The two parties agreed to extend the first contract in July, but the extension expired Aug. 31.

Last month, HGSU-UAW also began organizing for a strike authorization vote set to begin Sept. 13, citing the procedures for discrimination and harassment as one motivating factor. If union membership votes to authorize now that the contract has expired, HGSU-UAW’s Bargaining Committee would be able to call for a strike at any time.

HGSU-UAW has long called for third-party arbitration to handle such complaints. In December 2019, the union went on strike over three key issues, including non-discrimination procedures. When the union ratified its first contract several months later, the agreement did not include independent arbitration for cases of identity-based discrimination and sexual harassment.

HGSU-UAW vowed to continue organizing around the issue.

In its latest package of contract proposals on Aug. 31, Harvard offered student workers the option to appeal certain cases of discrimination and intimidating behavior to a third-party arbitrator.

The union, however, said it would not accept the proposal as written because it still requires students to go through the University’s internal processes first when filing a complaint and does not cover gender-based harassment.

During their public remarks at the rally, HGSU-UAW Bargaining Committee member Koby Ljunggren called the new proposals “promising,” but “not enough.”

“While that is not enough, that is a foot in the door,” they said.

Three graduate students from the Anthropology department, which has struggled with allegations and cases of sexual misconduct, called sexual harassment at Harvard “a huge problem” and claimed any internal policies are fundamentally flawed due to conflicts of interest.

“Students going through this process have no real recourse because Harvard has no accountability, no oversight, and a deeply complicated web of conflicting interests,” HGSU-UAW member Margaret G. Czerwienski said. “We need independent investigators and decision-makers for every grievance procedure on campus. Period.”

Graduate student organizers were also joined by other Harvard workers. Tascha Shahriari-Parsa, co-chair of the HGSU-UAW Solidarity Committee, read a statement by Harvard Union of Clerical and Technical Workers in support of HGSU-UAW’s campaign.

The sexual harassment complaint resolution process outlined in HUCTW’s contract includes third-party arbitration if a resolution cannot be reached internally, but HUCTW alleged in March that Harvard violated the agreement by not allowing members to use it.

“I've represented people who’ve reported sexual harassment or been punished for it,” Geoffrey P. Carens, HUCTW organizer, said in an interview after the rally. “In fact, people who have even been terminated for reporting sexual harassment. Regrettably, I hate to say this, but I think that they just want to keep sweeping this problem under the rug.”

Harvard undergraduates also attended the rally in support of the union.

“I’m hoping that the support that is here today really makes that clear that undergrads and everyone else are fully behind the grad students,” Sage K. Barnes ’24 said.

William M. Sutton ’23, an organizer with the undergraduate anti-sexual violence advocacy organization Our Harvard Can Do Better, also addressed the crowd at the rally.

Boston City Councilor and United Automobile Workers member Lydia Edwards delivered remarks shortly after, sharing her experience as a survivor of harassment and saying the current “system” in place to deal with harassment and discrimination complaints is “designed” to protect perpetrators.

“We are not expecting Harvard to change who they are,” she said. “No, we’re just demanding that the system work for all of us.” 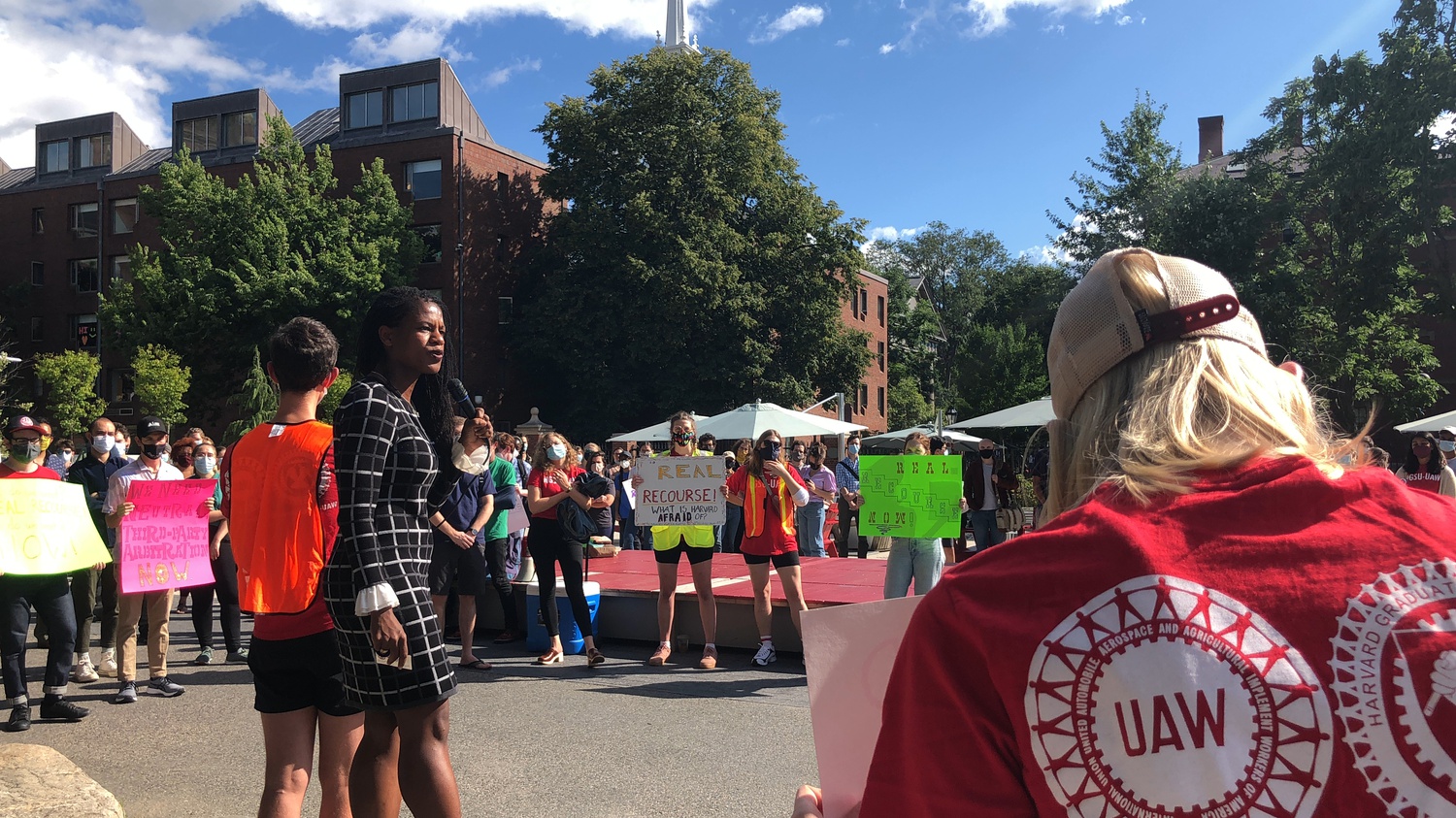 Harvard spokesperson Jason A. Newton declined to comment on the rally and the speakers’ remarks.

“I think people were really ready to turn out for this, and they were really hungry for an event like this and it really showed,” she said.

Borreggine added the next step in the union’s campaign is its strike authorization vote.