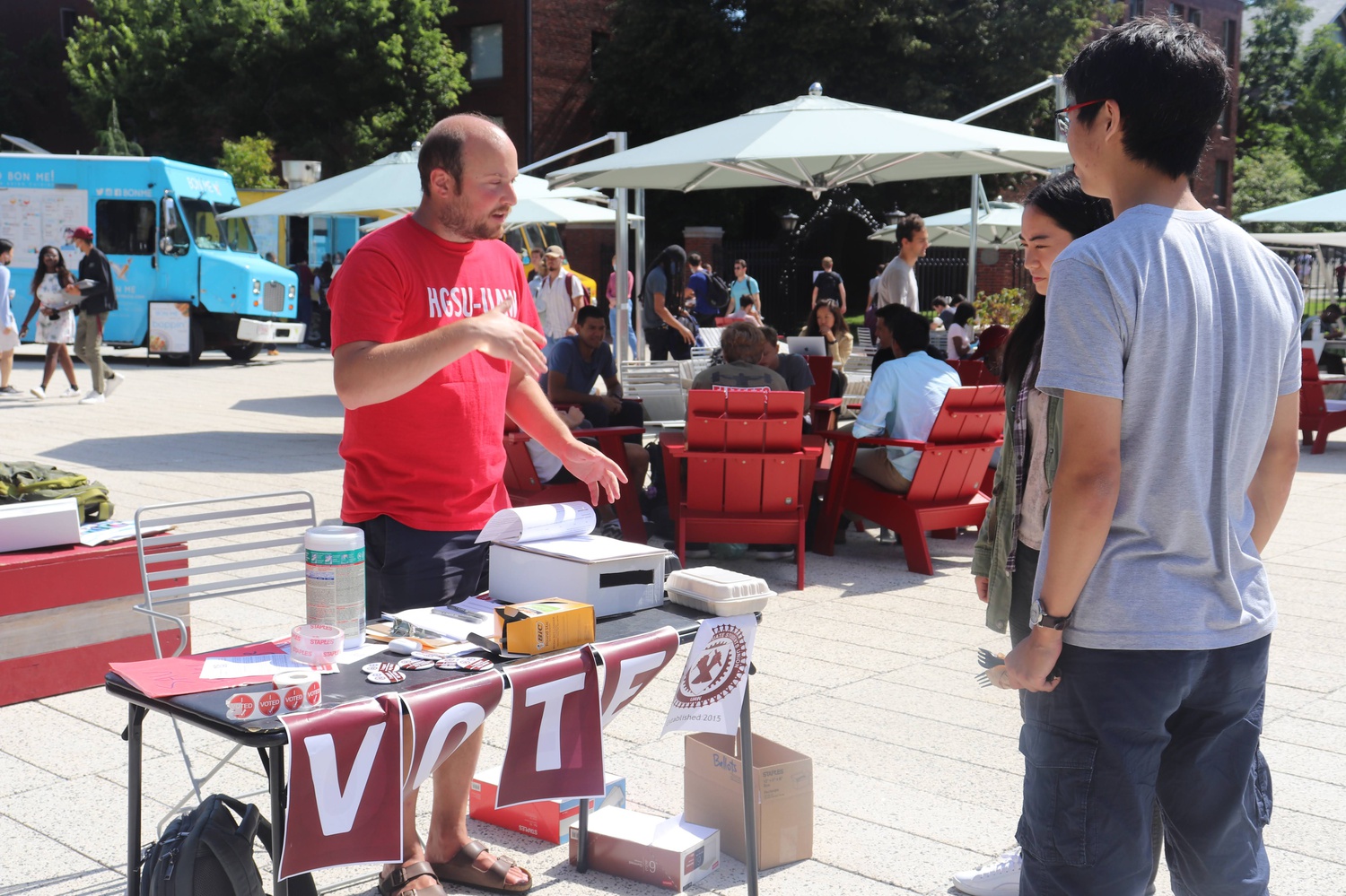 Andrew Bergman, a member of the Executive Board of the Harvard Graduate Students Union, converses with two students on the Science Center Plaza. By Truong L. Nguyen
By Cara J. Chang and Meimei Xu

For the second time in two years, members of Harvard’s graduate student union went to the polls Monday — both online and in-person — to decide whether to authorize their Bargaining Committee to call for a strike.

If two-thirds of voters vote yes, the Harvard Graduate Students Union-United Automobile Workers’ Bargaining Committee will be empowered to call for a strike at any time. The HGSU-UAW Elections Committee, which is overseeing the strike authorization vote, has yet to set a date to close polls; the vote opened Monday morning and will continue through at least Friday.

Harvard and its graduate student union have been in negotiations for the union's second contract since March. The University’s latest package of proposals to HGSU-UAW includes an approximately $14 million increase in compensation and benefits over the duration of the second contract, as well as an appeals procedure that could end in third-party arbitration for cases of non-gender-based discrimination. The union continues to call for higher levels of compensation and benefits, harassment and discrimination complaint procedures with direct access to third-party arbitration, and union security, among other issues.

HGSU-UAW’s first strike occurred in December 2019 following two years of bargaining for its first contract. More than 90 percent of voters approved the first strike in the 2019 authorization vote, which allowed current, former, and prospective student workers to cast a ballot. This time around, only HGSU-UAW members are eligible to vote. Student workers who are represented by the union but are not already members can simultaneously join the union and vote.

Union members can vote in one of two ways. On Monday morning, all current members of the union received a secure, one-time link from ElectionBuddy which they could use to vote online. Through the online election system, HGSU-UAW’s Election Committee can track who has voted but not how they voted, according to Bergman.

Student workers can also vote at in-person polling stations. The Elections Committee will be operating multiple polling stations Thursday and Friday, including at Science Center Plaza, Harvard Law School, and the Longwood campus.

Thirty percent of union membership had already voted online as of Monday afternoon, according to Elections Committee member Sannoy Das.

HGSU-UAW member Eliel Sanchez Acevedo said he believes a strike is an effective way to improve working conditions, as the union and the University reached a contract through mediation following the union’s first strike.

“In the end we got a contract — of course we didn’t get everything we wanted, but we got some good stuff,” he said after casting a ballot in favor of a strike at the Science Center Monday. “Now that we’re in person, we need to show them that we’re committed to do it again, if necessary, to increase the bargaining power.”

Swarnabh Ghosh, an HGSU-UAW member who observed some of the union and University’s bargaining sessions that were open to membership, wrote in a statement that he voted yes due to his concerns over issues of compensation, dental care, and harassment and discrimination procedures.

“I think this is an important vote as it has the potential to show Harvard that many student workers are increasingly disappointed and frustrated with its extremely slow progress on these basic, fundamental matters during a time of unprecedented crisis and hardship,” Ghosh wrote.

Rachel E. Petherbridge, who was recently elected to HGSU-UAW’s Executive Board as a trustee, also said she voted to approve the strike because she supports the union’s proposals for increased compensation and third-party arbitration for harassment cases.

“Our Bargaining Committee has done an incredible job negotiating on our behalf throughout this process,” she said. “But at this point, we have several issues that we both refuse to move on, and they’re issues that we think are so important.”

Petherbridge said she voted yes not only to improve her own condition but to empower all student workers.

In an email to Harvard affiliates after HGSU-UAW announced its strike authorization vote, University Provost Alan M. Garber ’76 wrote that Harvard is “committed to reaching an agreement” with the union, but advised faculty and staff to plan for a potential strike.

“With HGSU-UAW raising the potential for a strike in the fall semester, it is critical that Schools and Departments begin local contingency planning for managing the impacts of a strike,” he wrote. “The Provost’s Office and its partner offices will continue to engage with leadership across the University as planning moves forward.”