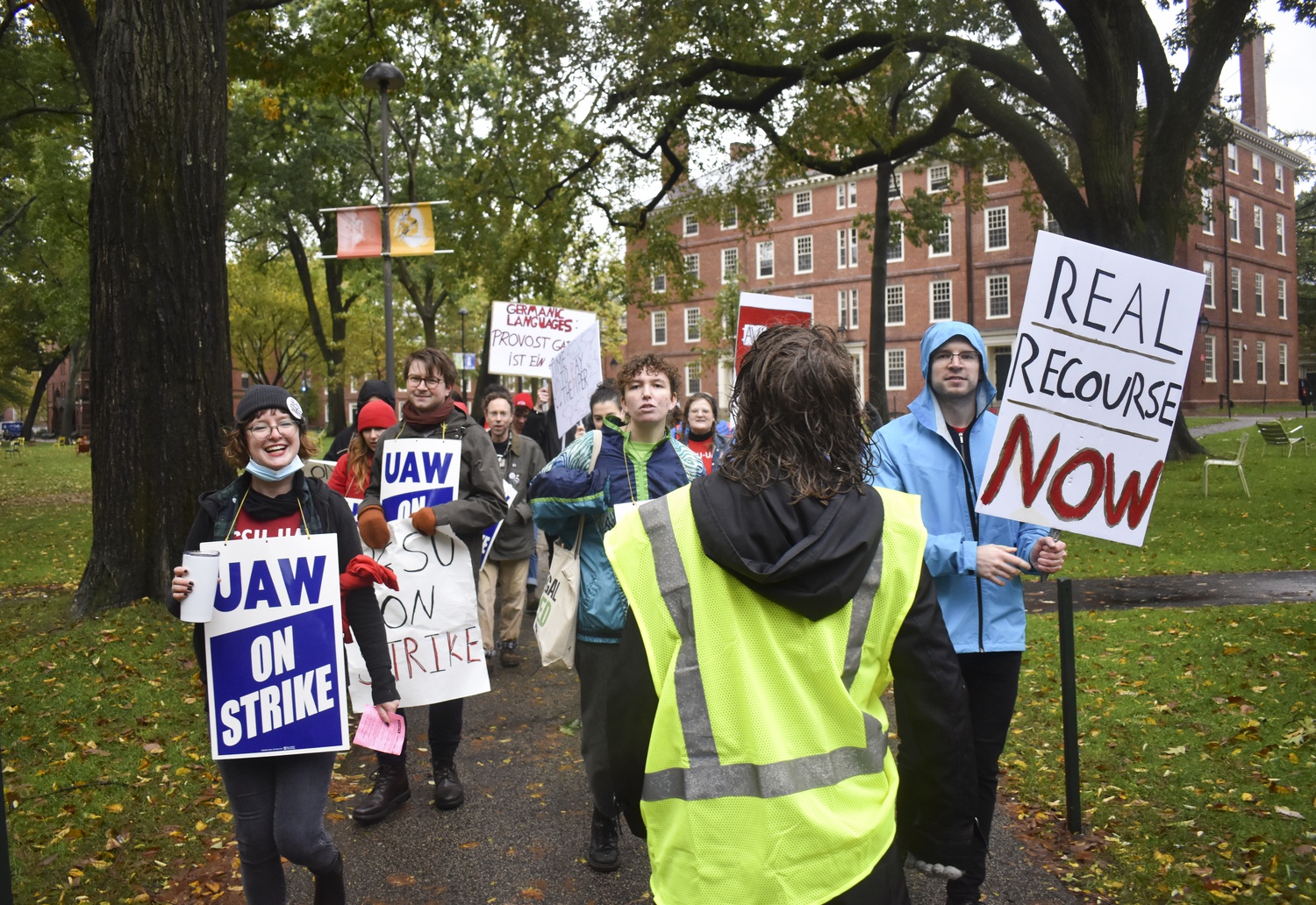 Shouts of “What do we want? Contract! When do we want it? Now!” echoed across campus Wednesday as Harvard’s graduate student union launched a three-day strike, its second walkout in two years.

After failing to reach a contract agreement with the University Tuesday, Harvard Graduate Students Union-United Automobile Workers began its strike with delivery pickets at the Science Center at 6 a.m., and picketing continued in the Yard and the Longwood campus until 4 p.m.

Student workers and their supporters called on Harvard to increase compensation, add more third-party oversight to discrimination and harassment complaint procedures, and agree to an agency shop, in which all students represented by HGSU-UAW would be mandated to pay dues to the union.

At 12 p.m., strikers flocked to the Science Center Plaza, where prominent union members and elected officials delivered speeches to the crowd. A large, inflatable pig smoking a cigar with dollar bills lining its pocket loomed over the rally.

During the rally, Environmental Sciences and Engineering professor Marianna K. Linz ’11 said she cannot participate in good conscience in diversity outreach and student recruitment events on behalf of Harvard while the University lacks “a mechanism by which they can deal with racial harassment.” HGSU-UAW is currently demanding third-party arbitration for discrimination and harassment claims not related to Title IX or gender and sex, as well as other protections for Title IX-related cases.

“As part of the [University of California] postdoc union, when I was at UCLA, this procedure existed,” Linz said. “It exists for other unions: for NYU, for University of Michigan — it’s not radical, it’s rational.”

Harvard spokesperson Jason A. Newton declined to comment on the union’s proposal, but noted that HGSU-UAW’s first contract provides the union representation on University working groups to address race-based and other types of discrimination.

Afterward, strikers moved into the Science Center, blocking entrances to large classes such as Chemistry 17: “Principles of Organic Chemistry,” Math 21a: “Multivariable Calculus”, and Psychology 1: “Introduction to Psychological Science.” They later picketed Emerson Hall, Smith Campus Center, and 124 Mt. Auburn St., where the Office of Labor and Employee Relations is located, before ending at Science Center Plaza.

On Wednesday evening, HGSU-UAW sent an email update to members after its bargaining session with the University.

“At our mediated bargaining session, the university arrived without a counterproposal and made clear that they have no intention to move,” the email reads. “Our bargaining team made clear that at this time our membership will not accept any contract that doesn’t have significant movement.”