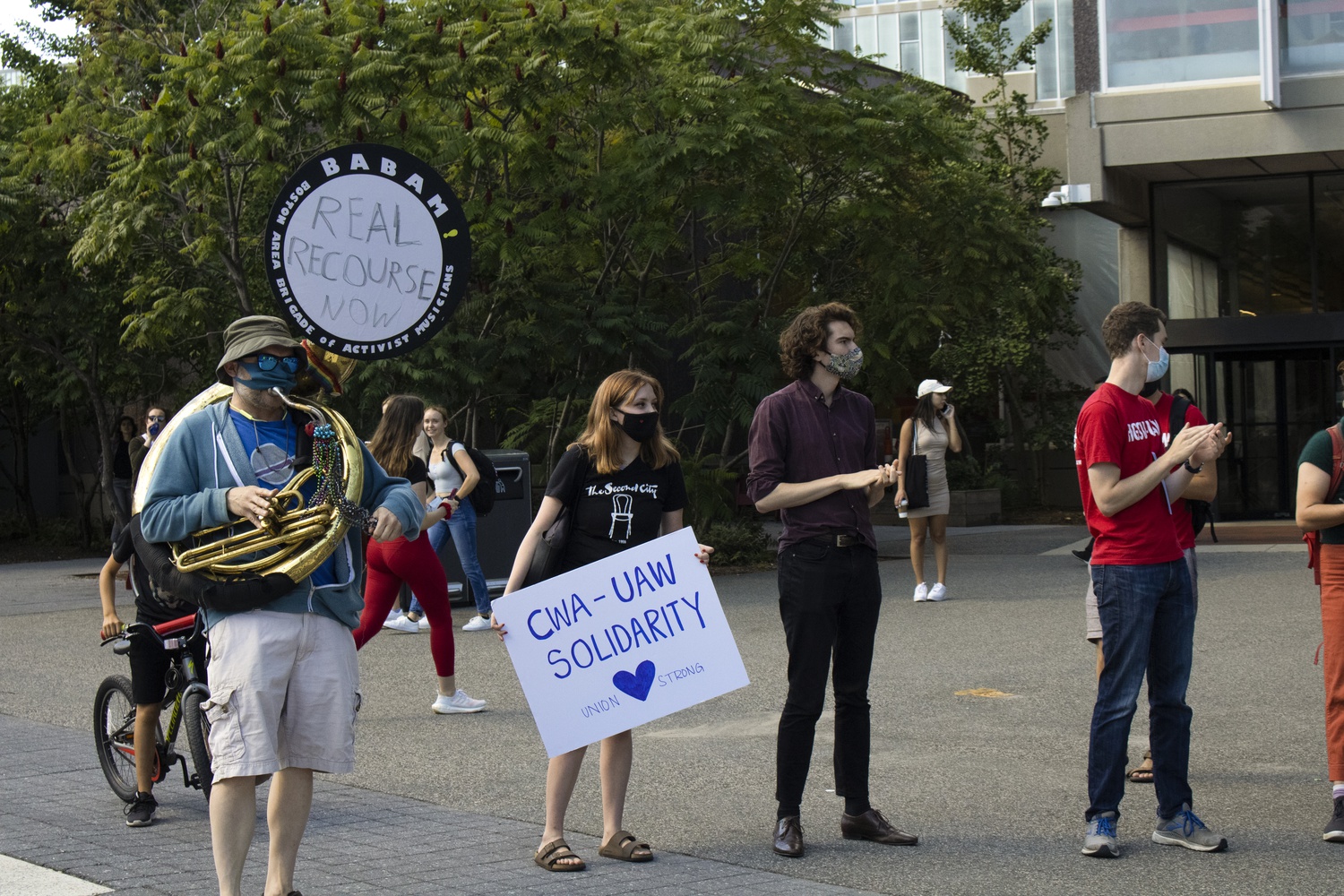 As recently as September, HGSU-UAW held a rally for third-party arbitration of gender- and sex-based harassment and discrimination claims. Last week, it dropped that demand. By Angela Dela Cruz
By Cara J. Chang and Meimei Xu, Crimson Staff Writers

In a bargaining session a week before its Wednesday strike deadline, Harvard’s graduate student union conceded its demand for third-party arbitration of gender- and sex-based harassment and discrimination claims — a sticking point since negotiations began for the union’s first contract in 2018.

“Given the university’s intransigence, we have conceded on our demand that Title IX cases be able to be brought to an arbitrator,” union leadership announced in an email to membership Friday.

Instead, the Harvard Graduate Students Union-United Automobile Workers will continue to push the University to help pay for lawyers for student workers undergoing the Title IX process, the email continued. It is also demanding that hearings and appeals panels for Title IX complaints be composed of a majority of third-party individuals.

Thus far, the University has rejected both proposals, according to the union. Harvard spokesperson Jason A. Newton declined to comment Monday.

HGSU-UAW’s concession comes after years of fighting for third-party arbitration to handle all identity-based discrimination and sexual harassment complaints. The union went on strike in 2019 in part over these demands and, when its first contract did not include independent arbitration for such cases, vowed to continue organizing around the issue.

As recently as September, union members rallied for independent arbitration for all cases of discrimination and harassment.

HGSU-UAW President Brandon J. Mancilla said in an interview Monday that the compromise will allow the union to pursue other priorities during this round of negotiations.

“We still agree that as a union, we deserve to have third-party arbitration for all issues and cases of harassment or discrimination, but in this specific fight, I think that’s one that we are willing to move on in order to get the others,” Mancilla said.

HGSU-UAW is holding firm, however, to its longstanding demand that complaints other than those of gender- and sex-based harassment and discrimination be able to be brought before a third-party arbitrator, Mancilla added.

The University has long maintained, however, that allowing student workers to pursue Title IX or other gender-based complaints through mechanisms not available to other students would violate federal regulations.

William A. Herbert, executive director of the National Center for the Study of Collective Bargaining in Higher Education and the Professions at Hunter College, City University of New York, said the union’s compromise is “significant.”

“From following this from afar, it’s appeared over time that this is a major issue in negotiations, so the fact that [the union] would be agreeable to arbitrate the discrimination issues and withdraw the Title IX issues will be helpful to reach an agreement,” Herbert said. “I think it is an important breakthrough on both sides.”

“We, the undersigned members of the Harvard faculty, endorse HGSU-UAW’s demand for ‘real recourse,’” the statement reads. “We agree with the union that Harvard’s existing mechanisms and resources for addressing sex and gender-based misconduct do not ensure the safety and well-being of its members.”

Margaret G. Czerwienski, an HGSU-UAW member who spoke at the September rally, said Monday the union’s decision to concede did not come as a huge surprise. Nonetheless, she said she believes the union’s current proposals would make a “tremendous impact” and preserve the “principles” of third-party arbitration.

“The Bargaining Committee communicated extensively with those of us who had been through the process, and they were really invested in hearing about our experiences and getting our opinion on what kinds of changes would actually produce meaningful results for people going through the process,” she said.

If HGSU-UAW goes on strike, Czerwienski added she will be on the picket line calling for the University to meet the union in the middle on non-discrimination procedures.

“I think the union made a huge concession to the University,” she said. “[HGSU-UAW] made two reasonable asks — putting third-party people on panels costs [Harvard] nothing. These are very reasonable asks to make the process more fair. I don’t see any reason why the University shouldn’t meet us halfway.”