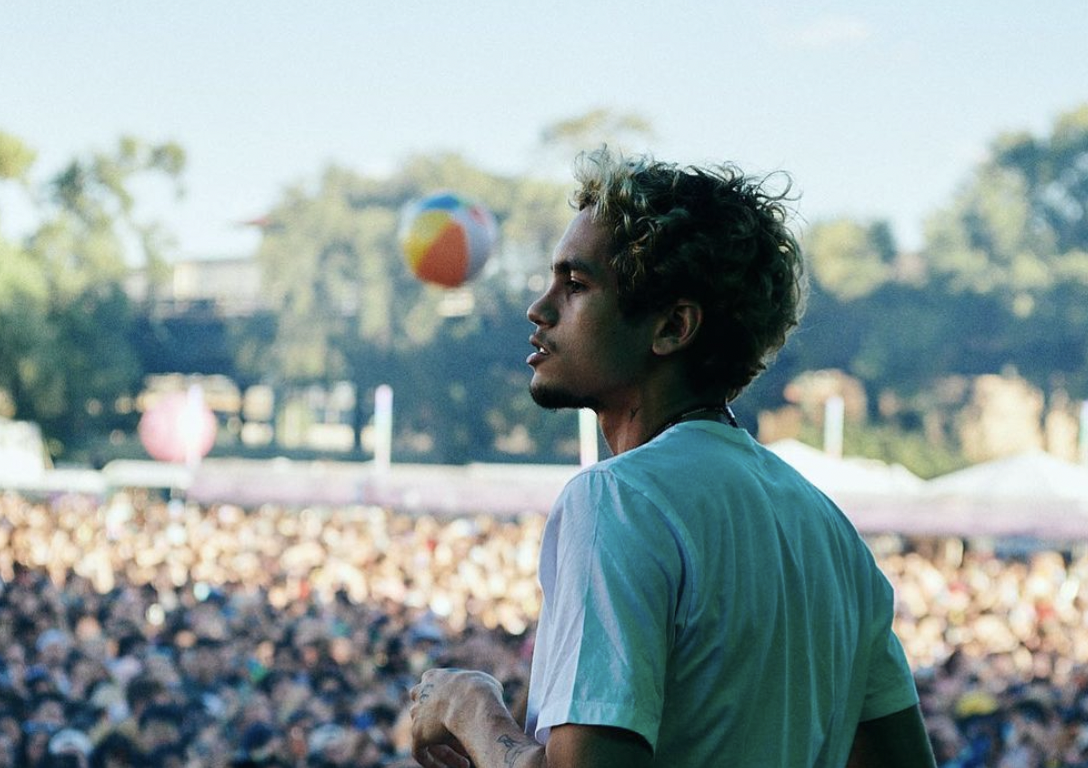 Listening to indie folk artist Faye Webster take over the Grubhub stage at Gov Ball with her ethereal blues and folk-tinged croonings was a lovely start to the day. Her band, complete with a pedal steel player joined her to add a spacey, sonically rich soundscape for Webster’s light, breezy vocals. Her invitingly candid and self-aware brand of songwriting made for an extremely intimate show, a mood only heightened by the fact virtually everybody in the crowd she attracted appeared to be a dedicated fan. Her most popular songs like the painfully honest “Right Side of My Neck” and “In a Good Way” were met with cheers from an audience that hung onto every word. “I love you!” one fan shouted, to which Webster cheekily responded, “I love you too, as a collective.” The addition of spoken word tracks like the mesmerizing 2019 track “Jonny” as well as a fun rendition of an “Animal Crossing” theme made the performance one to remember.

Next up on the same stage was electro-pop singer-songwriter Caroline Polachek, who appeared in an all-black, witchy outfit that perfectly matched her aesthetic and the dark, mystical imagery playing on the screen behind her. Known originally as a co-founder and lead singer of the synth-pop band Chairlift, Polachek kept her vocals front and center throughout her performance, playing around with the interesting riffs and whistle notes that define many of her songs. Almost equally as memorable were her choreographed dance moves, executed to match the meaning of her songs’ lyrics and to the timing of the sharp snare hits that propelled them. Popular tracks like the cerebral “Door” and the perfectly candid “Caroline, Shut Up” complemented by the addition of some yet-unreleased tracks (songs that “come from the future,” as she called them) from her upcoming album, grounded her powerful performance in audience favorites while raising excitement for what was to come. The irresistibly poppy and strikingly honest “So Hot You’re Hurting My Feelings” — delivered with captivating choreography — was a sure highlight.

Dominic Fike’s time shredding and singing on the BACARDÍ stage was powerful from start to finish. Among the most fun performances of the day, Fike’s set took his audience through all the bangers. From “Why,” the infectiously danceable song from his 2020 album “What Could Possibly Go Wrong,” to the megahit “3 Nights,” a song he admitted he has to play “every time because it made [him] famous” but that has kept its charm since its release way back in 2018, Fike kept the party going nonstop. “Together we are Dominic Fike,” the Florida native said when introducing his band, who proceeded to spend the rest of the show captivating the crowd with killer guitar solos and fiery drumming. His interactions with the audience were especially entertaining (and a welcome invitation to break from the mosh pits that dominated the set). “I tend to throw my voice out in this act here,” he said before going into “Westcoast Collective” and “Vampire,” two already energetic songs that he elevated even further with his impressive guitar skills and stage presence.

As soon as Burna Boy took the stage and the Afrobeat rhythm filled the stadium, an infectiously positive vibe radiated from the main stage. With the silhouette of a woman swaying side to side on the display behind him, Burna was feeling himself and showing off his sexy dance moves on stage, which quickly got the crowd swaying and grinding and head-bobbing along with him. His set included protest songs like “20 10 20,” which had everyone's fists raised high and united the crowd for a powerful tribute to the Lekki shooting of the same date. His DJ also got many cheers from the lively crowd after transitioning the performance into something more upbeat with the addition of Pop Smoke’s verse in the song “Enjoy Yourself.” This set created just the right energy to bridge the huge genre gap between prior act Princess Nokia and upcoming act 21 Savage.