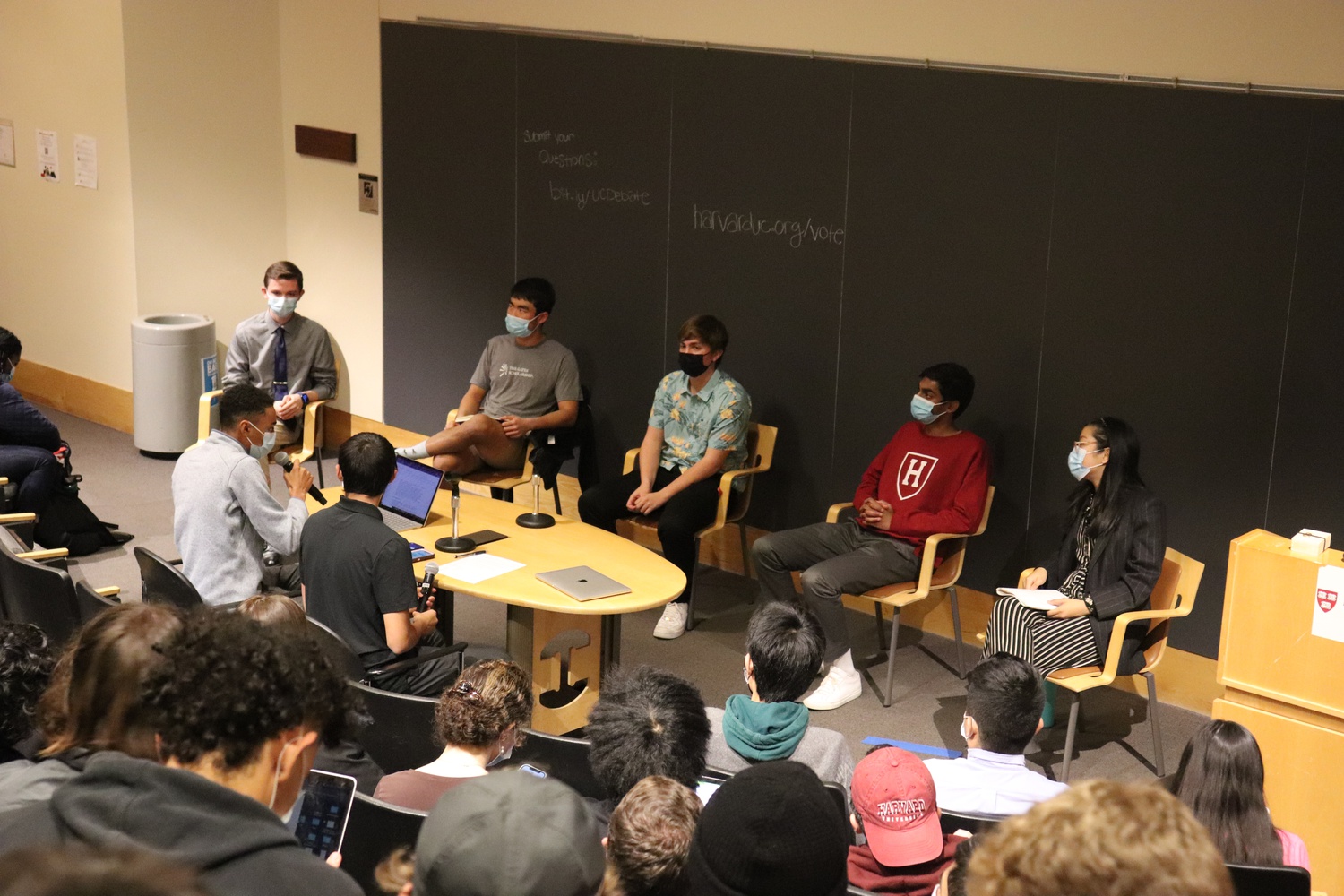 With the Undergraduate Council election underway, the Election Commission hosted an event for students to meet the candidates on Wednesday night. By Truong L. Nguyen
By Jeremiah C. Curran and Miles J. Herszenhorn, Contributing Writers

With the voting period underway for the Undergraduate Council election, five of the six presidential candidates gathered in Boylston Hall for a debate hosted by the UC Election Commission to advocate for their respective campaigns and field questions about their platforms from College students.

For an hour, the candidates — Michael Y. Cheng ’22, Nicholas J. Brennan ’23, Neil F. Katzman ’24, Kanishka J. Reddy ’24, and Esther J. Xiang ’23 — responded to questions ranging from their stances on social and academic life on campus to the effectiveness of the UC.

Ivor K. Zimmerman ’23, the sixth candidate running for president, decided to not attend the debate.

The debate, which was moderated by UC Crimson Yard Representative Owen Ebose '25 and UC Election Commissioner Alex Guh-Siesel '25, took place hours after a tumultuous start to the voting period. Though voting began at noon on Thursday, the Election Commission had to nullify all votes cast before 5:30 p.m. due to a technical error that occurred when voters tried to cast their ballot for Cheng’s campaign.

Katzman began the event by criticizing the UC in his opening statement.

“I’m Neil from New Mexico, and I’m tired,” he said. “I’m tired of the lying and the backstabbing that has occurred. I’m tired of people treating the UC more importantly than Capitol Hill. I’m tired of all this nonsense.”

Ebose asked each candidate how they would support students as they continue to transition back to life on campus amid the coronavirus pandemic.

Brennan said he believes the first step is recognizing the “extremely disparate” off-campus student experiences during the remote school year.

“I think the first step is realizing that things are not back to normal and that we suffered extremely disparate experiences while we were off campus,” Brennan said. “That means that returning to a full expectation of what students can do on campus is not acceptable.”

Some of the candidates reflected on how their upbringings influenced their policy plans and their decision to enter the race.

Xiang spoke about her experience as a first-generation, low-income student entering Harvard.

“I knew that it was going to be so different, and it was really scary feeling helpless, feeling unseen, feeling unheard and not knowing how to navigate this space,” Xiang said. “We want to make sure that all resources are accessible on this campus and that people do feel like they belong.”

“We want to be able to expand FYRE, the pre-orientation for FGLI students,” she said. “And creating a safety net program to give to students who experience any kind of emergency or financial hardship."

During the debate, Cheng challenged Harvard administrators to further invest directly in students.

Later in the debate, candidates put forward different ways to promote wellness and inclusion for all students.

Reddy explained that his “Pol.is” platform – a tech software where users proffer ideas that others can vote on until a consensus is reached — will promote “direct democracy” to address student concerns about wellness and inclusion.

Guh-Siesel ended the debate by inviting candidates to compliment a member of an opposing ticket.

Of all the candidates, Cheng received the most praise.

A previous version of this article misidentified the moderators of the debate. The debate was moderated by UC Crimson Yard Representative Owen Ebose '25 and UC Election Commissioner Alex Guh-Siesel '25.