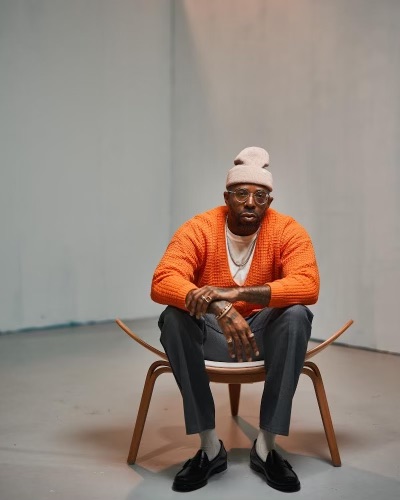 In an interview with The Harvard Crimson, the rapper described his latest album “Nothing Lasts Forever” as a statement of his resolve to remain true to himself as an artist.

“Nothing Lasts Forever” was released on Oct. 29.

“There’s a matter of factness on the project,” Allen said. “I think that's due to my divorcing myself from the chase of what people would deem as popularity or fame.”

According to the rapper, the desire to maintain his creative integrity comes from a reverence for music-making as a site of personal discovery and growth.

“Nothing Lasts Forever” was inspired by projects that pushed the boundaries of their respective genres — albums such as “A Seat at the Table” by Solange and Dr. Dre’s “The Chronic.”

Allen is the architect and founder of Grand Nationxl, a hip-hop collective and independent artist management firm that formed prior to the pandemic in 2020.

In addition to making music, the group’s goal is to reshape music industry standards around creativity and the well-being of artists, according to Allen.

“We want our music to be heard and we want it to be heard on a big platform, but we're careful to not chase what's popular just because everyone else is,” the rapper said.

His ninth studio album is the work of Kevin Allen, but it is also a product of Grand Nationxl.

Work first began on the project at the beginning of 2021 at The Reef, a recording studio in Oakland, CA that is the creative home of Grand Nationxl rapper and producer Mani Draper.

Together, Allen and Draper collaborated on the production that would become “Nothing Lasts Forever.” However, Allen largely credits Draper with formulating the sounds on the album.

“Mani built the foundation of the album,” Allen said. “He got a lot of the process done, so my production style for this album was less of a direction driver and more of a finishing touches type production.”

Draper’s work on “Nothing Lasts Forever” was the result of almost two years of crate digging at record shops around the world in search of the perfect sample.

“It's at least two summers worth of digging,” Draper said. “I would go in the summer from May to September — and especially pre-Covid when I spent a lot of time on the road — and from each city, come home with at least a crate.”

After gathering the raw materials, Draper organized his finds, regularly playing ideas for Allen at The Reef.

Working on “Nothing Lasts Forever” with albums by Solange, Dr. Dre, and Pharrell Williams as reference helped to shape the overall arc of the project, according to Draper.

“It's reverse engineering,” he said. “I think before we can ever identify as creators we are fans first.”

Another key reference to “Nothing Lasts Forever” was Pusha T’s 2018 album “Daytona,” a project that Draper revisited during a road trip with friends to Palm Springs in January 2021.

“We took the 101 on that scenic drive on the cliff with the water and the ocean; it was beautiful,” Draper said. “Listening to [Daytona] I could hear how intentional each chop was and how the sample was treated.”

Immediately after arriving in Palm Springs, Draper said that he wrote the beat for “Franklin Saint,” the second track on Allen’s album.

“I think he played me the [Franklin Saint] beat over the phone,” Allen said. “And I knew that that was the direction I needed to go in to start the project, like that's going to be number one and I knew it as soon as he sent me that beat.”

With “Franklin Saint” as a cornerstone, Allen built out the rest of “Nothing Lasts Forever,” with Draper and fellow Grand Nationxl member Brookfield Duece as key consultants.

As work continued, Allen called in features from Bay Area artists Ian Kelly, Jane Handcock, Rexx Life Raj, and Guapdad 4000. Although it is his solo project, Allen believes that making music is, at its core, a team sport.

“I feel like I have a higher probability of making something that works when I’m surrounded by a circle of writers, producers and people who've done exactly what I'm doing for just as long as I've been doing it,” Allen said.

According to Allen, one of the most involved collaborations on the project was the live version of “Franklin Saint,” which serves as the final song and bonus track.

Recorded at Zoo Labs in Oakland, the nine-minute live track was the result of Draper’s relationships with local bay area musicians.

“That was Mani’s Quincy Jones moment,” Allen said. “It was one of the most amazing things musically that I've been a part of. We filled the room with musicians and from the first time we hit play, they were in sync and they just knew what to do.”

With Allen at the front of the orchestra, the group made seven recordings of the track and ultimately decided to release the final take.

“Nothing Lasts Forever” is Allen’s ninth studio album, but the rapper said he doesn’t feel that he has changed all that much — rather that his latest project is a more complete statement of what he has always strived for: self-expression.

“I think at this point in my life I feel a lot more polished, but on the same trajectory,” the rapper said. “I didn’t try to make a hard left. I just tried to elevate the brand.”